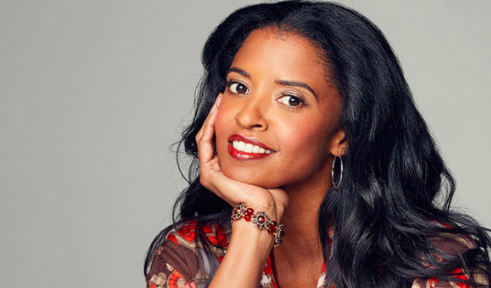 From becoming a bright shining star in Broadway’s Hamilton to breakout in roles in both TV and film, actor Renée Elise Goldsberry is carving an indelible place in Hollywood.

Starring in the upcoming A24 film Waves, Goldsberry plays Catharine, the stepmother of a family slowly falling apart as tragedy strikes and she loses her son Tyler (Kelvin Harrison, Jr.) through a violent act that leads to his incarceration and adds further stress on her marriage to husband Ronald (Sterling K. Brown).

Goldsberry also delivered a remarkable performance in the unforgettable story Immortal Life of Henrietta Lacks, the HBO adaptation brought to life with the help of Oprah Winfrey. BGN had the opportunity to sit down and chat with Goldsberry about Waves to discuss the themes of motherhood and her attraction to the script.

Catharine, Waves perfectly embodies how to be a step-parent. Can you speak to how you were able to portray being a loving stepmother to Tyler and Emily, versus what it might have been to be their biological mother?

I relate to Catharine because there was a long period in my own personal life where I questioned whether or not I was going to be able to have children. I read the script and I assumed that she also was wondering, ‘Will I ever have children?’ Then she needs Ronald with these two young kids who desperately need a mother, their biological mother having died when they were very young. So I feel like she feels that they are an answer to her prayers, and I believe that they feel that she is an answer to their prayers. That’s really beautiful. That’s pretty much the extent of it in terms of being a stepmother.

There are many roads to being a mom. She is their mother because of the role that she plays in the family. I think the only reason why it’s relevant in the film is that it just shows how much pain the son is in.

In one scene, we see Tyler essentially reject Catharine and the amount of love that she has for him. Being a mother yourself, was that a difficult moment to tackle?

I have young children, a 10-year-old and a 6-year-old. My assumption is that as children go into adolescence, you have to brace yourself for greater battles. The stakes are higher. There are greater battles ahead, and there’s a possibility of really saying hurtful things. You have to brace yourself. I’m bracing myself for the possibility of that in my future as a parent, and I’m ready to love them anyway. I love the fact that there is absolutely nothing that [Tyler] could throw at her or do that would stop her from being his mom.

You have an extensive body of work in film and television but are perhaps most recognized
for your stage performances. What are the differences in preparation for a Broadway show versus onscreen drama such as Waves?

We have an opportunity to work all together as a cast in the theater. We get to see everyone else’s work because we’re pretty much there most of the time. We have a tremendous amount of information at the beginning when you’re doing theater. We get to tell the story in order, and we get an immediate response from an audience. That’s really the difference. That’s pretty much the only difference in film.

One thing I miss is that I don’t really get to see the genius work that other people are doing until I see the film because I’m not really there. I’m not shooting that day. You have to make some decisions about the emotional journey because you’re probably going to shoot it based upon the location as opposed to in order. But it is lovely in film that our work is preserved. If you didn’t see me [on stage], I just have to tell you that I think it was really good.

Were you immediately attracted to waves after you read the script?

I was immediately attracted to the idea of getting to work with Sterling K. Brown. How quickly can I get to Florida?

He’s just a beautiful human being. You can tell that even if you don’t know him. You can see his spirit, and he’s just everything you want him to be. So that was the most attractive thing for me. I’d heard that the filmmaker [Trey Edward Shults] was a genius because everybody I know that saw his first film realized the talent that was there and were so excited about him.

I didn’t know that the world needed to see any other imagery of a young Black man doing something violent. We were all very concerned about that. We spent a lot of time talking about it. Kelvin Harrison, Jr. and the director spent a lot of time creating an authentic character. I’m grateful that they chose to take the risk and cast this film with a Black family in spite of the potential danger of revisiting some stereotypes that we don’t want to see.

What do you hope families will gain from Catharine and Ronald’s marriage and how they treat their children?

A friend of mine saw the film last night. She was really shook as a parent, and she said, “I’m taking from this film that I need to be more mindful of the silences of my children.” I think we need to make sure that children understand that we are not the judge, that we are their advocate, and that we need to give them the room to disappoint us and to fail and to make bad mistakes. We need to communicate to them that my disappointment or frustration from whatever happens is not what you need to worry about.

There are real consequences in this world. This world can be a dangerous place and the world can be very dangerous to you. It is my job as your parent to advocate for you. That is my first job. That is my last job. I hope that parents can work together in their different parenting styles to figure out how to be better.

Also, just in the grieving. [You] don’t know when you marry somebody that you have to be compatible in grieving, and this couple has to figure that out. They have two different styles of dealing with tremendous pain. It seems to me in the end of this film that they’ve learned to stay together and work on it. I hope that’s an example for couples out there that are also dealing with tragedy.