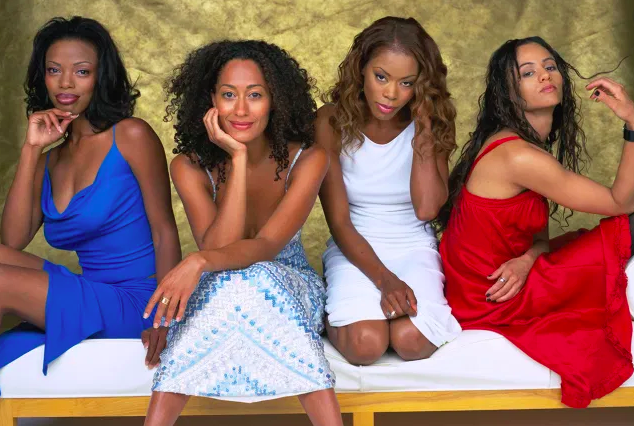 As a kid I watched Girlfriends religiously. When I look back on the early 2000s, it’s one of the few TV shows I remember watching where I could see women I aspired to be like. It left me with an indelible impression of friendship and racial inequity, but there was plenty I was unable to comprehend.

When I heard Netflix Canada had finally added it to their list of sitcoms, I was overcome with joy at the thought of revisiting the show as an adult to finally see what my youthful naivety had not allowed me to understand. But soon after I jumped in, it became clear that my re-watch would not be as nostalgic as I intended it to be. As much as I love my girlfriends and consider it one of the most iconic sitcoms to hit Black television, it definitely has some glaring problematic details.

There are a few episodes in particular that make for an uncomfortable watch, the first being the engagement episode where Toni invites an old college friend, Reesie, to Joan’s house where the crew later learns she’s been diagnosed with AIDS after her husband cheats on her with another man. Although it’s shaped as a heartfelt reveal meant to bring the girls together and dissolve tension in the group, it instead reads as an irresponsible depiction of the HIV/AIDS virus and reinforces the stigma that has plagued gay men for decades. We’re forced to watch as Joan, Lynn, and Toni “humorously” dodge and avoid interactions with the guest out of fear of contracting the virus.

More specifically, after Reesie cuts her finger while cooking, the friends run from her and throw away the kitchen utensils she’s touched, despite the guest sharing that the virus dies once it is exposed to oxygen. She even encourages them to become knowledgeable by finding the information themselves through health organizations, but they’re not convinced. Perhaps the dynamics of the scene are meant to show how persons living with the virus may feel isolated from society, but it misses an educational opportunity to have the girls address their internalized stigma and make an effort to use Reesie’s condition as a learning opportunity.

To make matters worse, Reesie dies a few episodes later, never making it to Toni’s wedding. I admit, I myself was ignorant to the facts about HIV/AIDS for a long time, and wonder if portrayals such as this one contributed to that. It would have been nice to see Reesie taking her medication and maintaining a normal life rather than dying abruptly shortly after her initial appearance.

Another episode I found unsettling was the one in which Lynn’s white sister through adoption, Tanya, arrives in Los Angeles to celebrate the date of Lynn’s adoption. The entire episode was a poor attempt at addressing racism and cultural appropriation, only for there to be no resolution in the end. Viewers watch as Tanya dons a blaccent, plays around with head wraps and African inspired clothing, and confidently throws around the N-word. Although she’s eventually called out for her wrongdoings, Tanya justifies herself by explaining her fetishism of Black culture and men, which is good enough for the girls. It’s an unsatisfactory ending to an infuriating episode.

Aside from those specific matters, there’s a tendency to deliberately use Black male characters to antagonize the girlfriends, especially through William. Although I appreciate his comedic presence most of the time, it’s difficult to overlook his dismissal of his sister, Linda’s sexuality, his projection of dating issues on the main characters, and his assertions rooted in misogynoir. Take for instance the Season 2 episode “Can’t Stan Ya!” in which William attempts to recover after being left at the altar by his fiancée, Yvonne. In his frustration, he comments that Black women cause many issues for men romantically and proceeds to chastise Toni for her sexual history, Maya for her extramarital affair, and Lynn for moving her Jamaican boyfriend to LA.

William is an “All Lives Matter” man who says things like, “Here’s the thing about you women,” then proceeds to tell the girls what men need and how Black women aren’t good enough to meet those needs, but we as the audience are expected to accept his ugly behavior as comedy. I confess I stare off into my imaginary camera time William makes an appearance.

There’s also the perplexing portrayal of dark-skinned women, specifically that of Toni Childs. One could argue that of the four women, Toni is set up as the show’s villain from the beginning. She is selfish, only taking interest in her own needs, even if it negatively impacts those around her. More importantly, she is used as a vessel to discuss colorism and abortion in ways that are never properly addressed and are brushed aside with unsatisfactory conclusions.

Toni refuses to date dark-skinned men, and that is pretty much the end of it. Nowhere does she come to terms with her internalized prejudice and overcome it. Instead, she is given love interests that are light-skinned or white. There’s also a brief pro-life conversation attempt in the fourth season, as Toni expresses her wish to have an abortion early on in her pregnancy after her marriage unravels. She’s berated by her girlfriends, who project their personal maternal issues — Joan’s childless lifestyle, Maya’s single motherhood, and Lynn’s past with adoption — onto Toni, who one could argue was actually being responsible in recognizing that she was having a child for the wrong reasons and therefore made a decision that would be best for her. What follows is a weak setup for future seasons that seem untrue to Toni’s character. Here, creators once again missed the opportunity to address something of importance to Black women.

Returning to Girlfriends with an adult lens forced me to reevaluate how I view Black representation in the media. I would be lying if I said I didn’t enjoy watching Joan, Toni, Maya, and Lynn constantly fall apart only to put themselves back together again, and I would be lying if I said their relationship didn’t leave me with a lifelong perception of the tenderness of platonic love. But the depiction of certain characters leaves me wondering if it was worth having them included at all if they were going to be the objects of insensitive jokes.