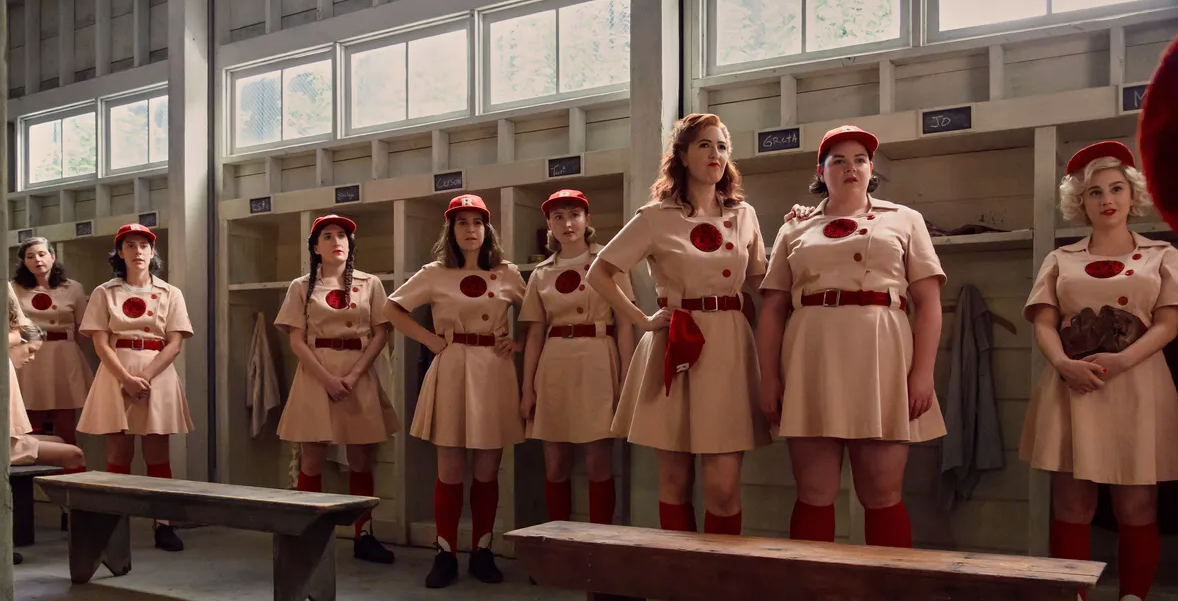 It takes trust, craft, and a lot of courage to make people laugh while slipping the truth into the narrative. Structurally, the dramedy A League of Their Own is just about as close to perfect as you can get. Kudos to the writing team, their work is simply outstanding.

From the first moment of the pilot, I felt instantly compelled to root for Carson (Abbi Jacobson, Broad City) as she decides to try out for a slot in the new Women’s Baseball League being put together to entertain baseball fans in 1943 as all the young men are being drafted into WWII. When the story moves on to Max (Chanté Adams, A Journal for Jordan), the co-lead of the series, I was completely hooked. The entire ensemble cast is exceptional.

Watching A League of Their Own was a connective experience. Microaggressions that Max, her best friend Clance (Gbemisola Ikumelo, Sex Education), and Max’s mother Toni (Saidah Arrika Ekulona, Bob Hearts Abishola) endure in 1943 still happen to Black women today in abundance. When the series uncovered those moments, I could feel them in my bones. But guess what? As cisgendered heterosexual Black folks were experiencing the full impact of living in a white supremacist society, they still believed in and worked hard to achieve the American dream. In striving to attain resources and high social status, these same Black folks excluded their queer and trans siblings.

I clicked play on my screener with the expectation of a continuation of the film I enjoyed back in 1993, wondering why A League of Their Own had to be made into a TV series. I felt slightly annoyed. Why can’t these streaming services be open to original ideas? Once I was halfway through the pilot, it became clear. As a straight, cisgendered Black woman who isn’t interested in sports, I never noticed the lesbian subtext that exists in the original film. The lesbian storylines that could only be done tongue and cheek back in 1993 are now out and proudly centered in the narrative in A League of Their Own the series.

The writing is stellar. The impeccable set design, make-up, hair, and costumes transported me to 1943, witnessing inspiring women as they strived to reach their impossible dream. A League of Their Own proves how rich storytelling is when writers have the lived experience of the characters they are writing. Black, LGBTQIA+, and female representation in television enable the sharing of authentic stories and humanize groups who have been marginalized in American cinema for generations. LGBTQIA+ athletes have always been a vital part of American culture. Now more than ever before, we must learn and normalize their stories.

While America has centered whiteness, the rest of us have always been living here, loving, laughing, and experiencing our lives while enduring the impact of white dominance, misogyny, and homophobia. Through the perspective of Max and Carson, two queer women, one Black and one white, we are exposed to the rich complexity of relationships that human beings have as we live together in real life. Every single actor in A League of Their Own is authentic. I believed every moment I saw on screen, and I was totally invested in everyone’s journey. Even if we have queer and trans members of our families, we in the cisgendered heterosexual world easily ignore the lived experience of queer and trans folk. A League of Their Own does a fantastic job showing rather than telling the complexity of how human beings are in relationship with one another.

I loved seeing how, not by choice but by necessity, Max and Carson become co-conspirators in the struggle to get their needs met. I also got a nuanced sense of the struggle that LGBTQIA+ folks endure from a new perspective. A League of Their Own allows the audience eight episodes to get to know Max, Carson, and their families and friends, allowing deeper insight into the impact of the “why” behind each person’s actions.

The relationship between Max and her mother Toni not only deals with Max’s sexual orientation, but it 100% gets the relationship of a Black mother wanting to protect and raise her Black daughter with dignity and the ability to care for herself independently in a racist system that was built by using Black women as resources and telling us that we aren’t worthy. The scenes between Max and Toni are stunningly authentic. In Toni, we witness the ingenuity Black folks used as they worked within the system to get the Black American dream.

I love that we are living in times where writers of color are sharing the stories of our elders who used their brilliance to become homeowners and business owners and provide the resources that their children need to thrive. Max’s best friend Clance is one of the many standouts in the series. She’s nothing you expect, and I love her so much. If we all had friends like Clance, the world would be a better place. Not only is Ikumelo a spectacular actor, but she is also a staff writer on the show and wrote on six episodes this season.

Not only is race and sexual orientation centered in A League of Their Own, but the series also highlights how women of this generation leveraged relationships to survive and the toll that all that navigating took on this generation. The series also showcases how women channel their rage in a vast array of positive ways to live their lives and have fun even though we live in a sexist society. So much had to be said with nuance for anyone living outside the facade of “All American Values” it must have been exhausting. (And it still is today.)

A League of Their Own premiered at the 2022 Tribeca Film Festival. One of the series consultants was an original member of the All-American Girls Professional Baseball League players, 95-year-old Maybelle “All the Way” Blair. She was a part of the panel discussion after the screening of the first episode.

Blair spoke about what it was like being a part of the League. “I hid for 75–85 years, and this is basically the first time I’ve ever come out,” she shared emotionally as the audience supported her with cheers and applause.

In a time where misinformation about the LGBTQI+ communities is specifically used in media to dehumanize and oppress American citizens, A League of Their Own tells the truth, allowing space for empathy and compassion by utilizing the power of comedy, compassion, joy, and good old-fashioned great storytelling and I am here for all of it.

All eight episodes of A League of Their Own stream on Prime Video Friday, August 12, 2022.