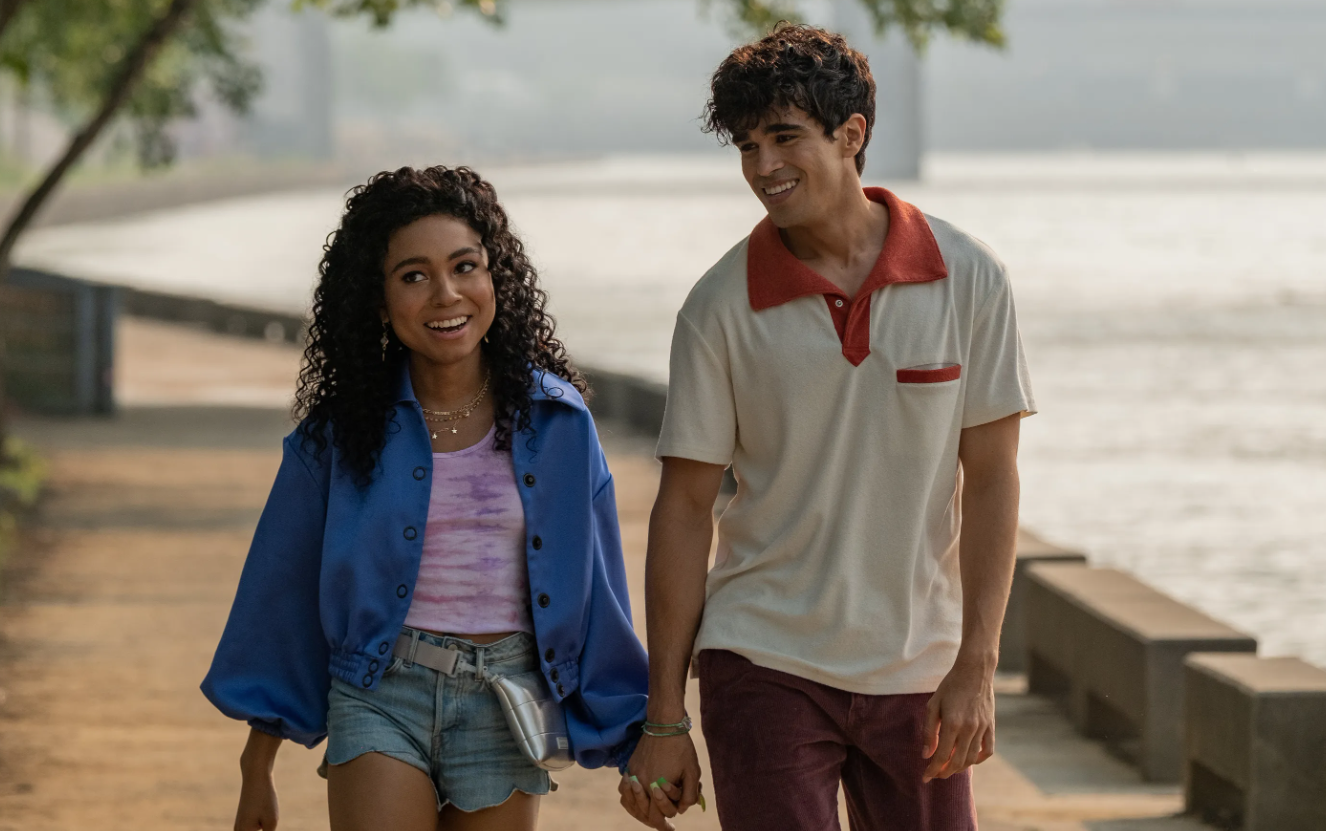 It’s a classic rom-com, and that’s one of the things that makes Anything’s Possible so extraordinary. You get all the greatest hits: boy meets girl, miscommunication trope, sappy romantic gestures, the innocence of a first kiss, the awkwardness of chaotic hormones, basically everything you could want from a YA love story. What’s special about the film is the girl in the story, Kelsa, is a girl of trans identity and is played by Eva Reign, a trans woman actor. It shouldn’t be revolutionary, but it is. Hopefully, it’s just the beginning of more.

Anything’s Possible is the directorial debut by the always iconic Billy Porter, actor, singer and whatever’s next. We at Black Girl Nerds have loved Porter for years, especially in Pose. I had the pleasure of speaking with him on the red carpet for Anything’s Possible, and he mentioned that he didn’t find the script, but instead the script found him. He’s known his purpose for a while and was delighted someone else could see the potential in him. The result is a love letter to Pittsburgh where a mural of Porter resides. We see the city and its bridges in all their splendor, and we’re treated to the lovely botanical gardens.

We open with Kelsa, a young girl who has a secret YouTube channel, a doting mother, and two best friends. She also soon develops a crush on Khal (Abubakr Ali) , a young guy in her art class. Some have taken to calling him Coll, because his best friend is Otis aka “Oats” (Grant Reynolds); however, it’s not his real name. He’s been unassuming, preferring to keep the peace and only really express himself in art and answering relationship questions on Reddit. That is until Khal is paired with Kelsa, a girl he’s been developing a crush on for a while.

Naturally, if things went smoothly it wouldn’t be a rom-com, so when Khal tries to declare his intentions, through miscommunications, her best friend Em Vaughn (Courtnee Carter) believes they’re for her. Despite Khal blowing up the school as Kelsa’s other bestie Chris (Kelly Lamor Wilson) claims, the two are still attracted together like magnets and soon sparks fly.

Em Vaughn isn’t done yet. She makes it her mission to destroy what Khal and Kelsa have built. Will the two lovebirds, with the help of their friends and family, be able to survive their unconventional relationship? You’ll have to watch when Anything’s Possible comes to Amazon Prime on July 22nd.

And you should go see it. It’s been a long held desire of mine to have more LGBTQ coming of age films. When I spoke with Porter on the carpet, he specified, “Coming of age, not coming out.” While tragic tales of rejection and woes from coming out are necessary stories, they’re not the only story. The more we explore the different sides of being trans, being Black, being a woman, etc. etc., the more we normalize these experiences. It’s a theme throughout the movie, and it’s handled with great care.

Written by Ximena Garcia Cuona, a trans woman herself, the script reflects an authenticity that could only be achieved by living that experience. I also got to speak to Cuona on the carpet and she mentioned she’d started writing the script when she began her own transitioning journey. It’s so sweet and so personal and has a way of breaking down barriers with peace. The team that put the movie together is compromised almost entirely of queer people, women, and people of color.

The cast has gushed about working with Porter, and you can tell that his directing approach abides by the saying, “You don’t have to get ready, if you stay ready.” Porter doesn’t employ any flashy dutch angles or try to be the next anyone but himself. His style is still distinctive in how lovingly and intimately the scenes are staged and shot. The scenes in the botanical gardens in particular are stunning and brimming with emotion.

Porter’s connection to art is one of a mother and child, and he’s making Mama proud. It’s easy to forget that while acting is a huge part of the final product, it’s the directing and editing that can take the film over the edge. For a first effort, Porter is to be applauded. Is it a perfect film? Not always; there are some cuts that are a bit confusing or slightly out of place. But overall, the skill is there. I can’t wait to see Porter hone it in future productions.

Most of the young cast are newcomers and handle the challenge well. Abubakr Ali is a true character, and he understands innately how to make Khal strong yet vulnerable. He does a lot of heavy lifting. and he does it well. Reign is herself through and through, and it’s that openness that makes her videos so fun and relatable. She has a way of teaching through being. The thoughts and experiences of trans youth are so unfamiliar to so many that it’s lovely to get this kind of insight. The desire to just be is strong, yet Kelsa is more than aware of the social ramifications that being trans, being herself has.

It’s interesting to see the ways teenage rebelliousness impacts the decisions she makes and the way she moves through life. Her mother is played lovingly by Renee Elise Goldsberry. She’s a fierce protector and loves and supports her daughter. She has her eyes on the road 10 miles ahead, which can sometimes make it seem stifling for Kelsa, but ultimately she wants what’s best for her daughter and nothing less. Sometimes in these movies the parent can turn into a “bestie” trope where anything goes and they let the kid run wild. Goldsberry is still very much a parent who wants to shield her daughter from the pressures of life. It’s a refreshing and endearing take.

Another thing worth noting is the amazing soundtrack. The lead song Impossible Is Possible was co-written by Porter and Shea Diamond, and the whole soundtrack was produced by Justin Tranter. The songs are beautiful and fit the the movie in a really fun way. They are modern but still hold that timeless Billy Porter charm.

Overall, Anything’s Possible is a cute and endearing film that is well worth your watch. And by watching, I hope more LGBTQ BIPOC artists will share their vision and voices on the big and small screens. Life is always better with a little bit of color.

Time To Get Bossy with the Cast of ‘Like A Boss’!

Billy Porter Playing the Fairy Godmother in ‘Cinderella’ is Perfect