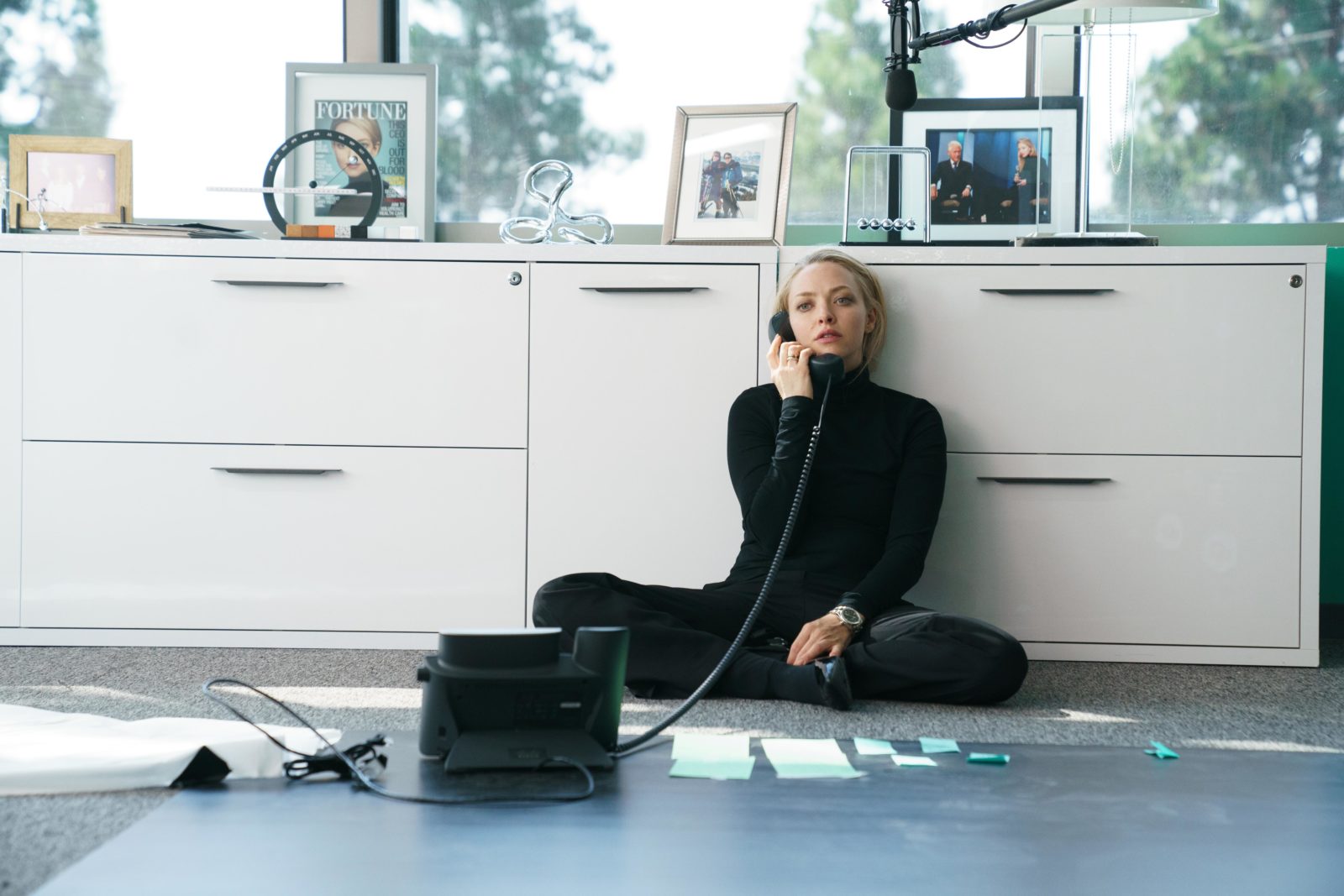 Based on ABC’s hit podcast of the same name, Hulu’s newest limited series The Dropout chronicles the evolution of Elizabeth Holmes and Theranos. The former biotech billionaire started out as a young girl wanting to change the world but ended as one of the biggest fraudsters in Silicon Valley history. Writers/producers Rebecca Jarvis and Taylor Dunn, and showrunner Elizabeth Meriwether (New Girl), take the wealth of information documented in the podcast and bring it to life on screen with dramatizations that make Elizabeth appear more human than we’ve seen before.

The series begins with recreated depositions of Elizabeth Holmes (Amanda Seyfried) answering damning questions about the operations at Theranos, intercut with scenes of her as a teenager, then college student, to young adult. It also explores her toxic relationship with Sunny Balwani (Naveen Andrews). It’s talked about in the podcast, documentaries, and articles, but here we see it from its inception. As she builds the business and gets attention from others (and gives attention to others), Sunny’s temper worsens, and he gets more controlling.

The eight episodes are broken up by the notable milestones in her life, from going to Stanford, to leasing her first office space in Palo Alto. I’ll admit that I don’t find her early life isn’t anywhere near as fascinating as her college dropout to CEO trajectory. However, it’s always intriguing to see the beginnings of fraud, isn’t it? Fans of the podcast will appreciate the details incorporated into the series, like her love of Yoda, the letter of ambition she wrote to her dad as a kid, and her Steve Jobs obsession.

Seyfried has a difficult job embodying a famously robotic person who seldom blinks and likely uses a fake voice. The actress captures the essence of Holmes as an adult but has to use that to form a younger version based on impressions of others who were in her life then. This “Elizabeth” is more expressive and probably more honest. It’s odd to see her get upset, have sex, doubt herself, and be vulnerable. She’s still a bit off-putting and too serious, but we’re able to see her as someone relatable.

The entire cast of The Dropout is outstanding. Holmes’ disgruntled old neighbor who applies for a rival patent, Richard Fuisz (William H. Macy), shares hilarious scenes with attorney David Boies (Kurtwood Smith) and the two actors play so well off each other. Laurie Metcalf does an eerily accurate portrayal of Dr. Phyllis Gardner, medical doctor, and professor at Stanford, who told 19-year-old Elizabeth that her idea was impossible.

Like Inventing Anna, The Dropout examines sexism and ageism in the business world, dominated by older white men. Elizabeth is constantly reminded that she’s young. At one point, she’s literally told that she needs adult supervision. But she’s not the only one. Recent college grads who work in the lab, Tyler Schultz (Dylan Minnette) and Erika Cheung (Camryn Mi-young Kim), are dismissed and discredited based on their age and their assumed lack of world science and business experience. This is funny because these men trust Elizabeth but not these slightly younger people who studied science.

Episode four is titled “Old White Men,” which, if you know anything about the company, you’ll remember that her Board of Directors was high-profile government men, who know business and politics but not science or medicine. And yes, they were all old white men. Elizabeth figures out how to manipulate them, observing, learning their personalities and what they need from her, whether it’s a surrogate daughter, or a visionary who uses technical language (who is sure to make them money), or just a pretty young girl to admire them. The media and investors saying that she’s the next Steve Jobs and Elizabeth comparing herself to Mark Zuckerberg definitely helps, too.

In that same episode, Holmes and Balwani try to land a partnership with Walgreens. The four men — Dr. Jay Rosen (Alan Ruck), Wade (Josh Pais), Roland (Andrew Leeds), and David ( Rich Sommer) — have some of the best comedic chemistry I’ve ever seen. While defrauding people out of millions or billions of dollars and endangering the lives of actual patients isn’t inherently funny, the sheer absurdity that she reached this level without ever having a working product is incredible. However, the series also explores the emotional impact of the 15-year fraud and how it took a toll on everyone from employees to investors to family members, showing just how much some people lost.

In a way, the tone of The Dropout reminds me of The People vs O.J. Simpson: American Crime Story because it shows all of the wacky things that happened in the case, all of the outrageous behavior, the media’s response, and how powerful, persuasive people can talk their way in and out of things.

There are a lot of different elements to consider in the story of Theranos and its founder Elizabeth Holmes — her relationship with Sunny, her family and upbringing, her college years, the early days in the lab, developing her new CEO persona, etc. It could’ve easily overloaded, but the series gives everything the attention it needs to make an impact. I wasn’t left feeling like I didn’t see enough of the story, but of course, it’s one of those unbelievable true stories from which we can’t look away.

The Dropout premieres March 3 on Hulu.