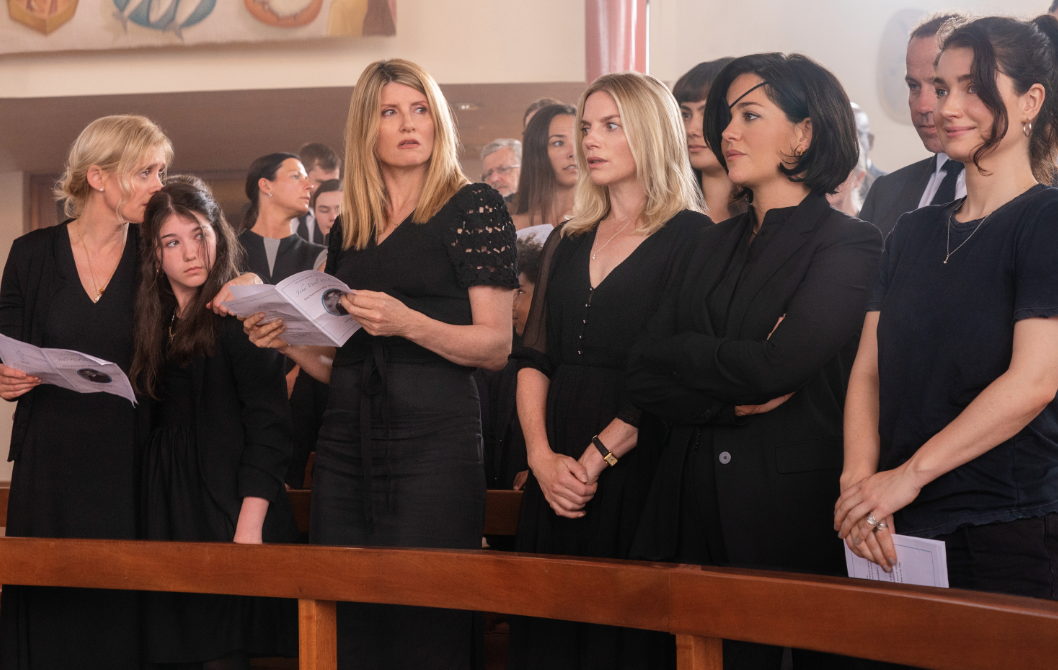 The Garvey sisters are up to something wicked, and their devious antics are a joy to behold. Based on the Flemish TV show Clan, Bad Sisters is a hilariously clever revenge murder mystery/thriller that leaves you guessing.

I’ve seen seven out of ten episodes, and have no idea who did it or how it was done. The writing is fantastic.

After the unexpected death of their parents, Eva (Sharon Horgan, The Unbearable Weight of Massive Talent), the eldest of five sisters, is left with the responsibility of raising her siblings, Gracie (Anne-Marie Duff, Suffragette), Ursula (Eva Birthistle, Brooklyn), Bibi (Sarah Greene, Penny Dreadful), and Becka (Eve Hewson, Behind Her Eyes). The sisters vow to take care of one another and their vow is put to the test by the most sensitive sister Grace’s tall, dark and sadistic husband, John Paul aka “J.P.” (Claes Bang, The Northman).

The Garvey sisters watch Grace’s spirit wither away slowly under the weight of J.P. ‘s callous ego. J.P. would prefer his wife not have a relationship with any of her sisters, and he systematically works to create chaos to weaken the sisters’ relationships. But for the Garvey sisters, blood truly is thicker than water. The ladies decide to save their sister by any means necessary.

In the pilot episode, the authorities believe J.P. was killed by accident, but the insurance agents/brothers, Matthew (Daryl McCormack, Good Luck to You, Leo Grande) and Thomas (Brian Gleeson, Peaky Blinders), don’t want to pay out the humongous insurance claim to Grace. They start investigating J.P.’s death on their own.

Set in Dublin, Bad Sisters is an incredibly entertaining dark comedy. Watching women unapologetically stand up for one another was inspiring. In real life, when a woman is stuck in an abusive marriage, most people want to avoid conflict. Even family members are afraid to say or do anything to step in. Bad Sisters hooked me with the “what if/and then” factor. What if women banded together to protect a sister from a dangerous man, and then had to deal with the aftermath of the stand?

The series works because of the strong ensemble cast, excellent writing, and direction. The pacing moves, the jokes hit, and the stakes are super high immediately. I instantly cared for everyone I saw on screen, and, as J.P., Claes Bang is so good at being bad it’s scary. The writers layer comedy in with the moral dilemma each of the sisters experience in each episode. Just when the Garvey sisters want to stop with their nefarious plans, J.P. does somebody dirty and the sisters feel compelled to take action.

Bad Sisters is a form of catharsis for women who are sick of power-hungry straight cis-gendered heterosexual white men dominating everyone and not having to deal with any consequences. J.P. is a racist, sexist, homophobic, transphobic, fatphobic, mysogonist hypocrite, the ultimate example of white supremicist toxic Christianity. This character easily could have been a cliche if acted so expertly by Bang.

J.P. is politely evil while being a gleefully vile hypocrite. He thinks he’s slick and has the overconfidence of a mediocre middle-aged white guy who benefits from being tall and fit, having a full head of hair, and being attractive enough to seem like he’s competent. But he’s basic. Down deep he knows that he’s basic, and that feeds his insecurity. His festering anger has made him power hungry and evil.

On top of all of this, the dude is kinda sexy darn it. If Satan had a brother, J.P. would be the human embodiment. He’s such an as*, he makes the audience root for the sisters to succeed with their truly terrible plan. At the same time, in all his evilness, this character made me laugh. J.P. seems to delight in his evil like a cute little boy at moments that come off as simultaneously funny, scary, sarcastic, and cruel. This character is so much fun he steals every scene he’s in. It’s not easy to play this kind of character without being a cliche, but Bang brings new levels of sinister to this role. J.P. never is physically violent with Grace, but the psychological abuse is brutal.

Ironically, J.P. would be nothing without his wife Grace. She loves this man with all her heart and defends him as a provider and as the father of their child. There’s a scene where Grace is happily ironing J.P’s socks, which struck me as a clever and sad detail to reflect the level of control this man has over his wife.

In Anne-Marie Duff’s hands, Grace has texture and variation. Each time I saw her grow small after J.P. belittled her, I’d want her to just speak up, to just get out of there. She broke my heart. But the writers are able to show the reasons why it’s so difficult for women who are in abusive relationships like these to get out.

This isn’t just about J.P. and Grace. Every single character in Bad Sisters has ulterior motives. Matthew and Thomas are half brothers who own the insurance agency and their characters raise the stakes, which drives the action. The chemistry between these two half-brothers is rough but it works for the characters. The subplots bring complexity that weave in an affair, two budding romances, and workplace drama that fill out the world nicely.