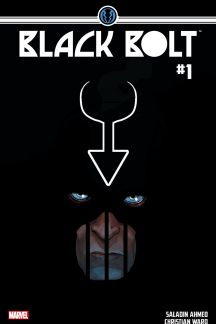 It’s time for another round of new Marvel series and Black Bolt is stepping to the forefront with his own title. A lot has been going on with Inhuman kind and most of it started when Black Bolt set off a Terrigen bomb that created a whole new group of Inhumans and supposedly killed him.

As the story opens we see Black Bolt, chained and gagged, with a voice screaming at him to repent his crimes. With no warning, he is blasted, either into death or unconsciousness, before waking up to the same chains and booming voice. He seems to be stuck in a never-ending loop.

When Bolt manages to break free, he learns he is not alone. He faces a group led by the Absorbing Man who Bolt must battle without his powers before confronting the ruler of his strange prison.

This issue is gorgeously illustrated and an interesting place to be with a character that is so well known in the Marvel universe. It has a bit of a twist reveal that leaves the reader with even more questions, and thus leaving the audience in suspense and looking forward to issue #2. This has the makings of being a very interesting arc for Black Bolt similar to the deeper themes explored in the Vision series.