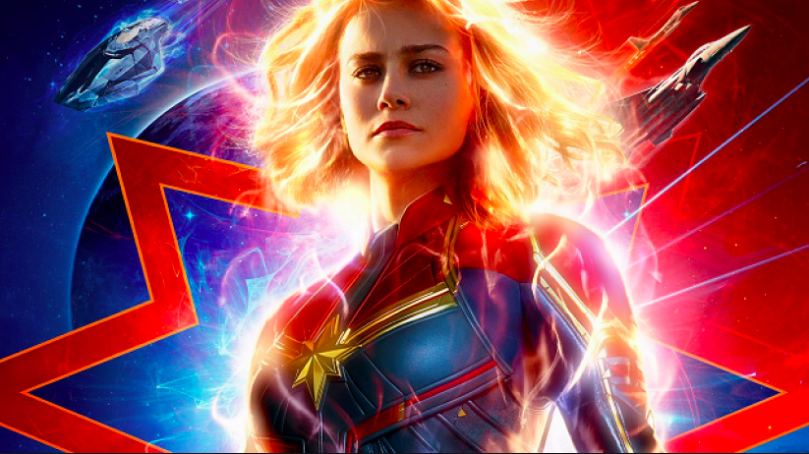 Another step in the right direction, Marvel studios presents Captain Marvel. This film gives us the very definition of girl power with a female-led superhero story that encourages and celebrates women empowerment, independence, and confidence. Co-written and directed by Anna Boden and Ryan Fleck, the duo behind Half Nelson and It’s Kind of a Funny Story, Captain Marvel ushers in a new era of stand-alone Marvel female heroes with relatable relationships.

When Carol Danvers (Brie Larson) lands on earth, she is left with questions about her past and the people in it. As a significant member of Starforce, an elite Kree military team, Carol finds herself in the middle of a galactic war between Kree and Skrull. While on earth, Carol must work with Shield Agents Nick Fury (Samuel L. Jackson) and Agent Coulson (Clark Gregg) to protect the earth and its inhabitants. 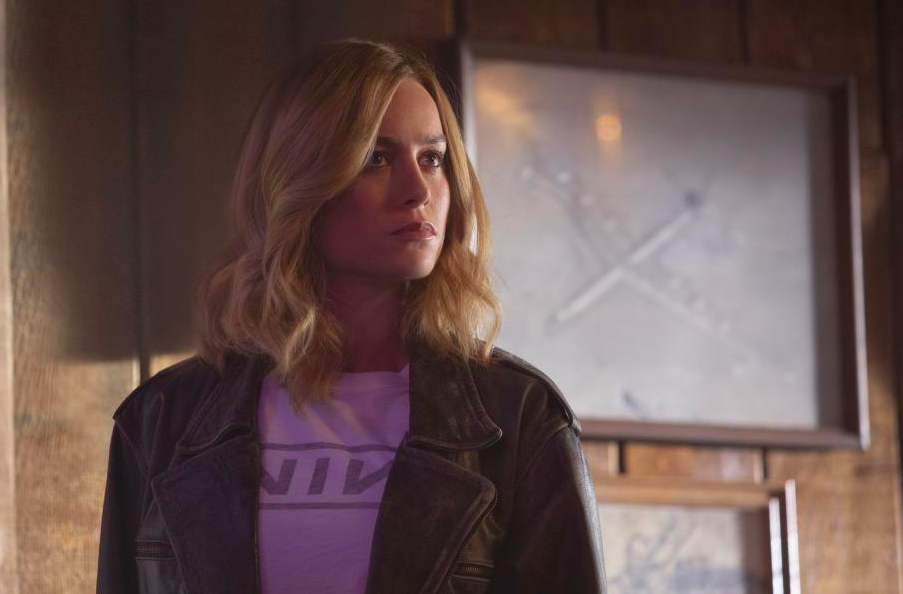 Early on we see that Carol already has her powers. During a fighting exercise between Carol and her squad commander Yon-Rogg (Jude Law), she is being taught to control and separate her powers from her emotions. During these scenes, we see the close friendship Carol and Yon-Rogg have. When a mission to save a member of Starforce goes awry, Carol is captured by a Skrull faction led by Talos (Ben Mendelsohn) and forced to face her nightmares and understand what they really mean.

What really jumps out at you during this debacle, is that Carol isn’t the damsel in distress when she’s taken. She is caught and gets herself out. It’s a great change in dynamics. What’s also compelling is that she doesn’t use sex or her looks to get out of a bad situation. She uses her smarts, ingenuity, and training, along with her kick-butt mentality to get free.

The first act of Captain Marvel is a bit lackluster. But, I get it, it’s building the world and setting up the plot. We are introduced to the Supreme Intelligence (Annette Bening) who takes the form of the person you admire the most. We are learning who Carol is, along with Carol herself. We are trying to fill in some of the same gaps that she has. The second act starts and it’s a bit more satisfying. I do wish there was more of a “wow” factor throughout. There just wasn’t enough at stake. 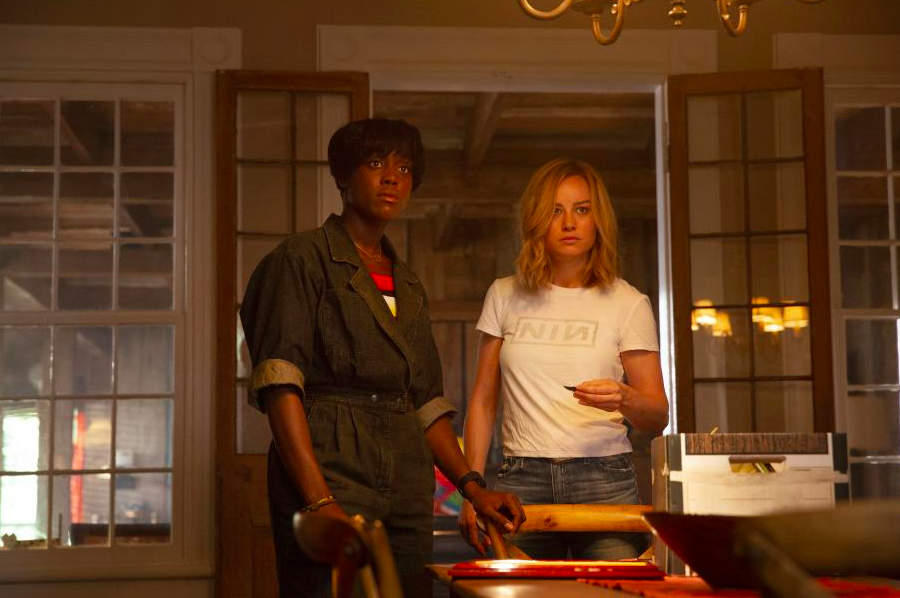 What does hold this movie together is the relationship between Carol and Maria Rambeau (Lashana Lynch). It’s the team up we want more of. It’s the type of female relationship we don’t get to see regularly on screen. Maria is a single parent who flies jets for a living. Her friendship with Carol blossomed as they became the only two females in a male-dominated pilot program. They are both prime yet different examples of strong females. It’s fantastic that we get different versions of powerful women.

Maria’s daughter Monica (Akira Akbar) is brilliant, adventurous, and already living up to her potential. If you follow the comics and understand who Monica Rambeau grows up to be (cough cough Captain Marvel aka Photon aka Pulsar aka Spectrum) you won’t be shocked by her can-do attitude and Black girl magic words of wisdom. It’s an introduction to another female protagonist who could rock the Marvel Cinematic Universe. 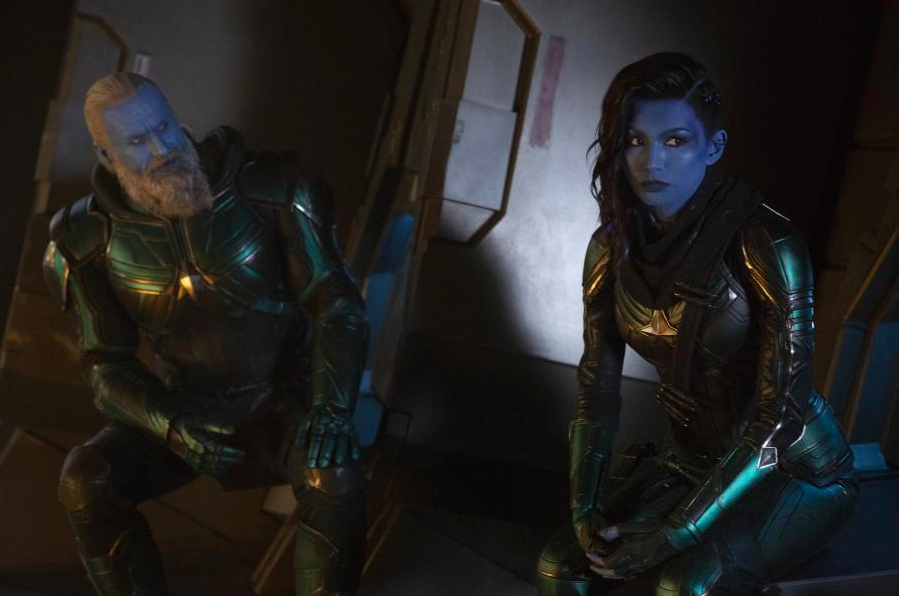 What also keeps this film light is the amazing score and soundtrack. The film takes place in 1995 and there is no shortage of amazing 90s songs that will keep you in the moment. The 90s nostalgia is real and in full force in Captain Marvel. If you thought being in the 90s would be weird, just think about the awesomeness that is also a young(er) Nick Fury. A Nick Fury that has two eyes and isn’t jaded by years and years of alien scum messing up Earth. It’s pretty awesome.

All in all, it’s refreshing to see strong females of all races and colors on screen together. At no point are they reduced to sex symbols. Both Boden and Nelson worked hard to make sure the positive message they were sending out didn’t get lost in translation. When the hero to save the day is female, we are all here for it. Captain Marvel is ushering in a new era of stand-alone Marvel female superheroes that prove being human is cool but being a girl is even better.

This film’s message is all about empowering women. It’s almost as if every single scene is a conduit for positive female thinking. While the visual effects are heavy, the story is still there. At no point are we made to ever think less of her or her female counterparts. Captain Marvel may not be the strongest but she will continue to get back up to fight for what’s right.

Captain Marvel hits theaters March 8, 2019. You can also see Captain Marvel presumably save the day in the upcoming Avengers: Endgame.