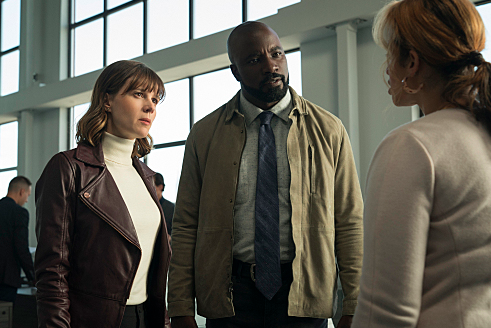 From veteran show creators who have created the shows The Good Wife and The Good Fight, Robert and Michelle King’s Evil provides a unique perspective on the miraculous, the scientific, and the religious. The series masterfully weaves together topics that are usually presented in juxtaposition to one another. There’s something in the storyline for everyone: the skeptics, the believers, and those who rely on science as opposed to any belief system. Evil is a psychological mystery that examines the origins of evil along the dividing line between science and religion.

Evil stars Mike Colter (Luke Cage, Breakthrough) as David Acosta, a Catholic priest-in-training who teams up with a skeptical psychologist Kristen Bouchard, played by Katja Herbers (Divorce, Westworld), to investigate unexplained mysteries surrounding the Catholic church. In the pilot episode, Kristen is not necessarily interested in the paranormal, nor does she believe in the supernatural; yet she takes on the assignment to assist David to help pay off some of her student loans.

David has a zeal for investigating the supernatural, and the former thrill-seeking journalist is now studying to become a priest. He genuinely believes in the power of God’s word, Biblical teachings, scripture, and the supernatural. Rounding out the trio is the grounded Ben Shakir, played by Aasif Mandvi (Blue Bloods, Human Capital), who is a realist with carpentry skills, yet has a knack for decoding the rational meanings behind hauntings.

As a forensic psychologist, Kristen relies heavily on science and documented evidence to explain every strange encounter that is experienced. She even relies on science and research to try and explain the horrific night terrors and visitations from an ancient evil demon, Incubus, that she begins to experience. In this episode, Kristen feels secure in the natural, scientific knowledge that she is relying upon. That is, until a psychopath who is either demonically possessed or mentally instable delivers information to her that no one else knows, showcasing that demons may have access to natural and supernatural information.

A prisoner who has just committed some serious crimes including of rape and murder begins to shows signs of demonic possession. The manifestations come forth as speaking in ancient tongues and Latin, unusual personality shifts, and even drastic changes in vocal tonality. The demons even give their names. In this episode, the man under possible possession has a demon in him by the name of Roy. In one scene, Kristen recites the Lord’s Prayer from the Christian Bible to a subject of a possible demoniac. Kristen seals the prayer with the mark of the Cross. At the sound of the Lord’s Prayer, the inmate jumps across the table and attacks her. Is this mere coincidence, or do demons truly tremble at the name of Jesus and the Lord’s Prayer (Bible, Matthew 6:9–13, Luke 11:2–4)? The beauty of the series is that it provides the space for viewers to make their own decisions.

While his revelations and even a threat against her four daughters leaves her undeterred, at least on the surface, Kristen sets out with David and Ben to assess events that science can’t quite explain. They are on a mission to see if there’s a logical explanation for the manifestation of evil in people and in the world or if there is truly a supernatural realm from whence these occurrences come from.

What makes the storyline effective is that belief systems, or the lack thereof, are not pitted against one another. On the contrary, having characters with differing and even opposing beliefs adds to the narrative and shows the benefits of engaging with and learning from others who may not necessarily think or believe the same way.

This series is definitely a genre-bending in the sense that it includes elements of faith and the miraculous, science and pragmatism, as well as horror and suspense. It is to be noted that this series does not make a mockery of faith and belief in the supernatural, but rather provides a probing introspection from both a scientific perspective and a faith-filled perspective. This series will lead to conversations about the supernatural and psychological studies on the mind. Demons, angels, and scientific evidence converge in this series with questions like, “Are you referring to demons metaphorically or clinically?” “Does evil have an origin?” “Can a human become demonically possessed?”

Whether you are a believer in the supernatural or not, CBS’s Evil will provide plenty of opportunity to discuss the supernatural from a Bible-based perspective, a scientific perspective, and any other viewpoint. Christian and conservative audiences need to know that many of the episodes will include Bible-based evidence and content. There is murder, bloodshed, and even some horrific scenes of torment, but all is presented in the episodes as metaphors for the real-life evil that is truly happening in the world today regardless of what one believes.

I have to say that the title of the series, “Evil,” was misleading for me. I was relieved to learn that the show will definitely not just magnify evil, but it will highlight the miraculous and angelic as well.

The show creators are the husband and wife duo Robert and Michelle King.