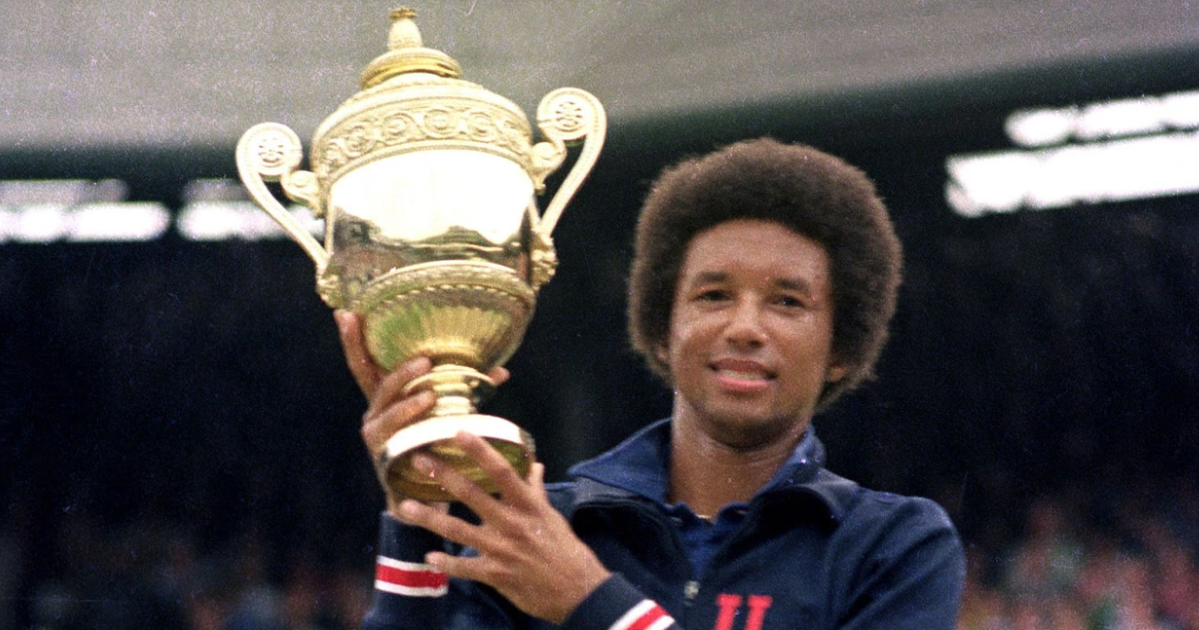 CNN’s documentary Citizen Ashe fleshes out the groundbreaking tennis player, civil rights activist, and philanthropist, Arthur Ashe. The film explores the testing of his legacy and his journey from young tennis neophyte to decorated pro-athlete, coach, and known activist.

To be as candid as possible: I don’t like tennis. I can never see the ball. I don’t understand the scoring, and I’m terrible at playing it. So I’ll be the first to tell you that there wasn’t much to initially draw me to this film. Sadly, while I was growing up, Arthur Ashe was no more than a Black History Month trivia question. I knew he played tennis, which Black men rarely then (and now) participated in. I knew he was a winner, and I knew he was a coach for the irascible John McEnroe.

What I thought I knew was that he was a reluctant activist — that it took a while for him to become invested in civil rights and that he wasn’t interested in speaking out until it affected him directly. There’s just as much truth to these statements as there is hyperbole. Citizen Ashe manages to show the many sides of Arthur Ashe, both celebrating him and holding him accountable.

Growing up in Richmond, Virginia, Ashe was the eldest of two boys born to Arthur Ashe Sr. and Mattie Cordell Cunningham Ashe. Ashe Sr. was a strict but loving man who encouraged both boys to excel. This included school (Ashe Sr. was illiterate) and sports. Mattie passed away when Ashe was young, and her failing health led Ashe Sr. to insist on no-impact sports. Ashe doesn’t speak a lot about his mother, though her absence definitely took an emotional toll on the family. Ashe recounts that he would have liked to have known her and often thinks of her when pondering the difficult decisions in his life.

After finding tennis, Ashe showed promise and received coaching from Virginia Black tennis legend Ronnie Charity. During high school, he started to gain attention and was soon awarded a tennis scholarship to UCLA in 1963. It was a great time of growth for Ashe and a perilous time for the country as America prepared for the trouble just beyond the horizon. While Ashe was in Richmond, the city was still largely segregated. Ashe practiced at a “Black only” park and was not allowed to participate in certain matches against white players.

The Vietnam war was looming and the civil rights movement was building momentum. After Ashe went pro, he founded the Association of Tennis Professionals and accomplished a lot for the sport. But what was he doing about the race crisis?

Citizen Ashe does a good job of exploring Ashe’s approach to the civil rights movement. While others were loud and brash, Ashe seems almost reclusive on the issue. Instead of raising hell in the streets (which is not a bad strategy sometimes), he preferred to mentor young boys and attempt to get more Black men into the sport.

Harry Edwards explains not only the Black public opinion of Ashe during this time but also his own. It was not favorable — at first, anyway. But once Ashe began to show resistance through his actions, the effect was almost instant, especially in those who held Ashe as a hero in their minds.

If there’s a flaw in Citizen Ashe, it has to do with that section. I’ve read copy that says “he refused to be bullied,” and while this would be an admirable statement toward someone trying to strip you of your rights, it seemed to be directed at the Black leaders who criticized Ashe’s lack of action. There was the tried-and-true “I didn’t need to be attacked; I needed to learn” assertion, which serves as a shockingly resurfaced cop-out for bad or ignorant behavior.

Ashe’s interest in civil rights peaked when he was denied entry to South Africa for being Black. He became aware of Nelson Mandela, who spent years in jail fighting apartheid before later becoming president of the country. Mandela was an inspiration to Ashe, who then became more open and vocal about the poor treatment of Black citizens. Later, this extended to women, Native Americans, and even those suffering from AIDS, a virus he succumbed to after receiving it via blood transplant.

In this vein, the criticisms were correct — there was a certain amount of hubris that Ashe needed to overcome. He had a fascination with white America and a reliance on it to give him the opportunity to succeed. The decision to threaten that connection could not have come lightly. I’m not sure it was possible, but I would have liked to have heard more about the aftermath of when he finally did get involved. Did it justify the years that he was silent?

Citizen Ashe is well-paced and a lovely documentary that uses found footage to get to the heart of Arthur Ashe. There are loads of archival footage and personal testimonies from his family and loved ones that help flesh out this man that several only know from a book. His wife and daughter continue to strengthen his legacy by endowing the charities and causes that were dear to Ashe, even in his final days.