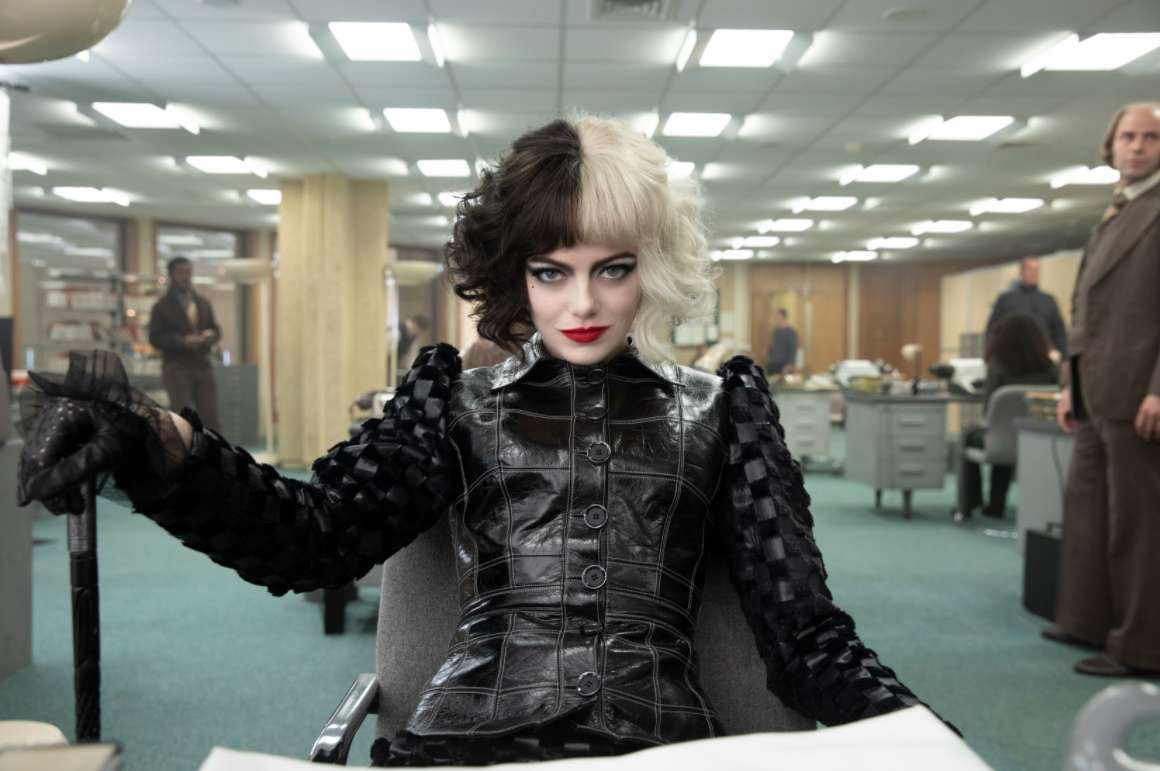 And we’re back! I can’t tell you how amazing it was to sit in an actual movie theater to screen Cruella. Not just any movie theater either, but the El Capitan theater in Los Angeles. There is no other way to dive back into Disney films and the world than a socially distanced screening at El Capitan. Oh captain, my captain. The chills, the excitement, sent my heart aflutter. I was home, and it was a perfect experience.

What a film, indeed, to welcome the senses back to the theater. The sights, the sounds, the emotions were felt up and down and all through this film. No time in my childhood did I say 101 Dalmatians was my favorite movie. At no time did I suggest to my family or friends that we watch 101 Dalmatians over any other Disney movie. After seeing Cruella, the first thing I wanted to do was watch it again and tell all my family and friends to watch it too. I was pleasantly surprised by how much I enjoyed this film.

Cruella explores the infamous villain’s backstory. We meet Cruella at a young age when she still goes by Estella. Estella’s ambitions and dreams lie in design. She would give anything to work in fashion in the best department store for the best designer. Of course, things don’t go to plan, and from the shenanigans, betrayal, deceit, and beyond killer fashion outfits, Estella becomes the iconic Cruella De Vil. Directed by Craig Gillespie (I, Tonya), Cruella was co-written by Dana Fox (How to be Single) and Tony McNamara (The Great). The film stars Emma Stone (La La Land) as Cruella, Emma Thompson (Saving Mr. Banks) as the Baroness, Joel Fry (Game of Thrones) as Jasper, and Paul Walter Hauser (I, Tonya) as Horace. The film also includes Kayvan Novak (What We Do in the Shadows) as Roger and Kirby Howell-Baptiste (The Good Place) as Anita Darling.

The first thing that stands out about Cruella is the homage it pays to the films that have come before. From silly but memorable lines referencing dogs looking like their owners to Cruella’s signature, mad driving skills. The attention to detail and care to not reinvent the wheel were apparent. The character of Cruella took on a whole new version that I am such a fan of. Getting to see Cruella from a new stage of her life was refreshing and fun. As a prequel, we still get to see the original players with Anita, Roger, Horace, and Jasper. It is pleasantly weird to be able to say there is a method to Cruella’s madness. I will never look at 101 Dalmatians the same.

You can’t see Cruella and not talk about the costume design. It is strikingly gorgeous. If fashionistas of the world unite and see this film for the clothing alone, they will leave the theater happy and amazed by the work Jenny Beavan did as the costume designer. Each outfit was better than the last. I saw influences from films like The Devil Wears Prada, The Hunger Games, and Mad Max: Fury Road. I would have never coupled those films together before seeing Cruella. The colors are vibrant. The design themes are meticulous and perfectly matched for the scene. Everyone looks amazing. The costumes, coupled with the hair and makeup, make for exquisite looks. Hair and makeup designer Nadia Stacey helped Thompson and Stone complete looks that were stunning. A legit feast for the eyes. I can already see the cosplays at the next Comic-Con.

The production design was perfect. From the spacious aisles of the dress workshops to the immaculate party sequences with ornate decorations in a 360-degree view, production designer Fiona Crombie did her thing for this film. The overall aesthetic of the story had me hooked from the beginning. Each look made me want to jump into the film. We can all recall iconic decor from our favorite shows or movies. I think Cruella will be one to add to the list. A Cruella-themed dinner party is certainly on my to-do list; Black and white wigs for all.

“Cruella de Vil. Cruella de Vil. If she doesn’t scare you, no evil thing will…” and “Kanine Krunchies,” are the songs I remember from the original animated Disney film with Cruella. This is not my childhood soundtrack, but it could easily be my parents’. The original animated feature was made in 1961. It is an interesting call out to who this film is made for, with its dark themes and menacing scenes. The OGs or the newbies? Cruella easily encapsulates the ’70s in two-plus hours. The soundtrack for Cruella is a diverse clash of rock and soul. From Florence and the Machine to Nina Simone, from Queen to Ike and Tina Turner, from the Bee Gees to the Ohio Players, the music adds everything it should to an already skillfully crafted film. The music is done with intention and adds to the period and the action. Sound and visual play well together in Cruella.

The acting was great. I am such a fan of Emma Thompson in this film. Her character is a lot darker than what we are used to seeing her portray, and it looks good on her. Emma Stone pulls off a stylish, punk-rocker version of Cruella de Vil that looks like she had a blast playing. The dialogue was fun and witty. There was a nice pace and rhythm to the whole film. The word choices, whether penned or improvised, flowed nicely throughout. There were some sound editing issues where dialogue was muffled, but nothing that took away from the story.

Cruella has easily become one of my favorite villains. The entire cast was great. While these villain backstory films can be hit or miss, I am here for this one. The fashion, the story, the acting all had me hooked. I enjoyed this film a lot. The visuals were stunning, the dialogue was on point, and the costume design was ridiculously charming and edgy. This film and these characters were made for this cast.