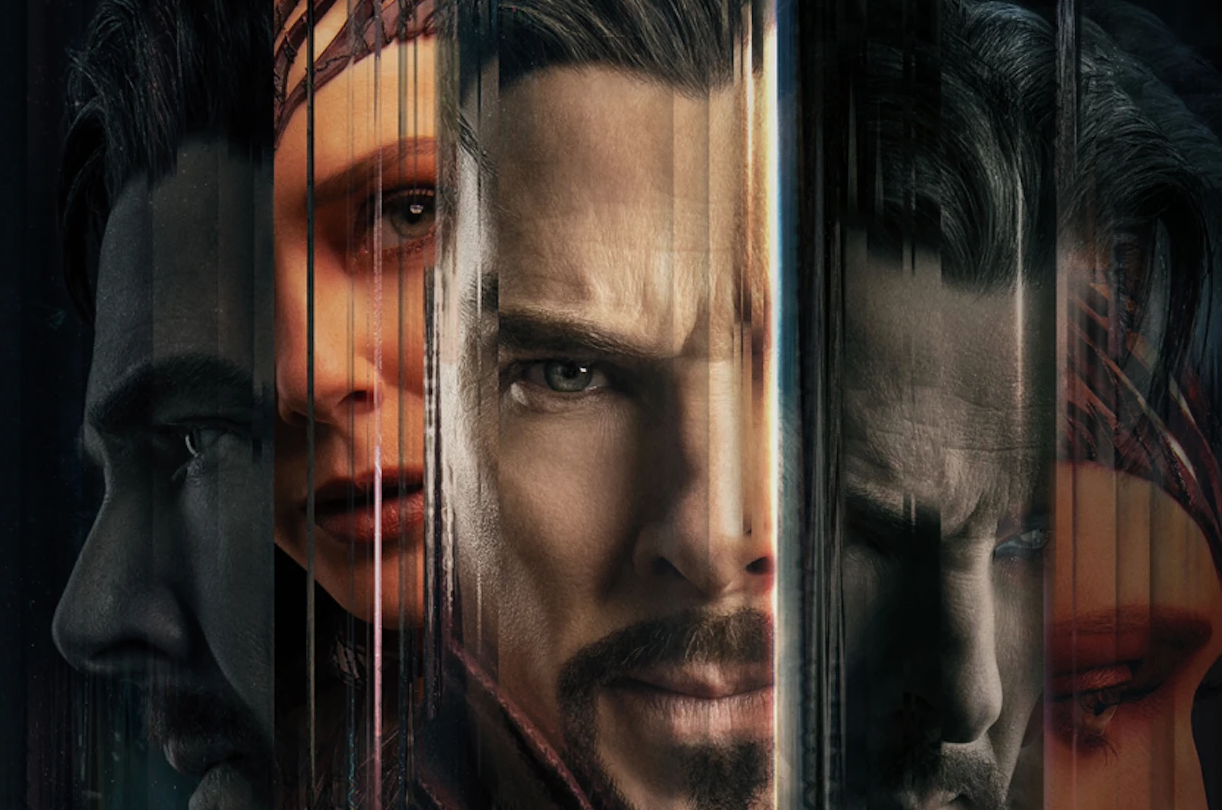 As with other Disney Marvel films, in Doctor Strange in the Multiverse of Madness, loyalties are tested, betrayal yields harsh consequences and nothing as audiences know it will ever be the same. Doctor Strange 2 gave Spider-Man trilogy director, Sam Raimi, the opportunity to return to the MCU, but this time with a darker Marvel film. The movie was written by Michael Waldron (Loki) and for the first time in a Marvel film, labeled “A Kevin Feige Production,” in recognition of Marvel president, Kevin Feige.

This is a spoiler-free review.

Welcome to the Darkhold, the book of evil spells, which as the name suggests, unleashes a deadly inner-darkness from the one who reads it. It’s been mentioned throughout the MCU projects and during discussions of chaos magic. Chaos magic, which can warp and manipulate reality, doesn’t bring out the best in people when it’s combined with the Darkhold. Thus, the prime antagonist of this film: uncontrollable darkness.

Doctor Strange in The Multiverse of Madness explores the ways in which loss can fester and eat away at reason to unleash chaos within the most powerful beings. It tugs at issues of performative happiness and both concealed and rampant grief. So, in this way, it’s very relatable to the human experience. People can deal with their inner demons in a multitude of destructive ways. There are also glimpses into possibilities, as a multiverse suggests, there’s the idea of changing one’s reality to fit their needs, which can ultimately mean disregarding the needs of others. While the main elements of this film connect, this multiversal film has wormholes.

For comic book fans, it’s fulfilling to see the film’s take on Scarlet Witch and Doctor Strange, especially the madness part. They both have comic book history that isn’t afraid to show that they’re two of the most powerful, albeit unstable, characters in the MCU. For many of the movies so far, Scarlet Witch’s powers were on a smaller scale than her comic book self, but in this film, her true potential is recognized and allowed to break free.

In short, the movie makes it clear that she’s a complex anti-hero known for some questionable behavior throughout the comics. It also allows for the good and evil dichotomy to rest for a spell and make way for debate and division. Doctor Strange 2 is a thoughtfully discursive arena without rules.

It introduces the Illuminati, which was confirmed after trailers hinted at their appearance. However, this version of the secret organization is a little different than the classic members some may know. This, in part, is likely due to the film’s take on alternate realities. All the same, this is arguably the most exciting component of the film—but short lived. There are immense possibilities set up within their inclusion in the film. It’s refreshing to know that the Marvel Cinematic Universe and multiverse have a lot left to explore.

It was also endearing to see a newer comic book favorite, America Chavez, come into the mix. She has a rich set of capabilities, and this film only scratches the surface. Undoubtedly, her story has only begun in the MCU, but will also likely be at the center of more alternate reality storylines. She adds a sense of innocence to contrast the more emotional tones of the story.

Horror fans are in luck, because this film gets as close to the genre as any MCU film has, despite adding a younger hero to the roster. It’s more graphic than other Marvel films and there are more “jumpy-ish” moments, but nothing that should give anyone nightmares. It’s still under its PG-13 rating, but with some extra gore that may make for some excitement. There are also some very cool moments of pure insanity that will take many by surprise. This film takes a few steps forward into grotesque imagery as it explores monsters and monstrosities.

The graphics were visually stunning and immersive. While “traversing the multiverse,” viewers are treated to distinct worlds with their own colors and tones. The world-building is interesting and inspires questions about each dimension’s history, creation, and rules.

The Bad: The Plot Is Subdued and Character Development Stifled

While this is a Doctor Strange sequel, the movie is very much Scarlet Witch’s — more than it is Doctor’s Stange’s. In the case of films like Captain: America Civil War, giving multiple characters important story arcs in one hero’s film isn’t rare for the MCU. However, unlike that film, Doctor Strange 2 feels lopsided. Audiences get a continuation of WandaVision on steroids, while Stephen’s own journey feels stunted. Where he begins the movie doesn’t quite line up with where he ends. Scarlet Witch had a show to develop her character’s grief, but Stephen had one solo film and shorter appearances in others. This is his movie, but it’s nabbed from him.

Yet, it’s hard to say that Scarlet Witch “steals the show” in the best way. Olsen is phenomenal at betraying her, but the way she’s written in this film is worthy of pause. She’s known for losing her mind many times in the comics and killing other heroes, so Scarlet Witch’s actions in the film are up to par. However, like Stephen, the way she begins the movie doesn’t quite line up with where she ends. Her motives are fixed during the duration of most of the film only to melt away in minutes. There’s a level of discontent there.

As exciting as it is to see America Chavez make her debut in the MCU, her character is mostly a plot device and void of personality. This seems to be a writing decision that opts to delve into her past only slightly. This makes sense with how much is already going on in the film, but it also makes her character seem boring—when she’s not. She’s more of her powers than an actual person in the movie.

The Verdict: A Solid Marvel Film, But There’s Room For Growth

Is this the best Marvel film or sequel? No. It’s not going to be that big in the MCU memory bank, but it’s important. At best, it’s good and achieves what many fans have been hoping for: It launches into the multiverse and rewards everything that the franchise has been setting up for years—and then promises more to come. There’s excitement and some unexpected turns, but also some watered-down story and blandness. With 2 hours and 6 minutes of film, it could have been balanced better. Yet, with so much to cover, it did the characters enough justice. Best of all, Doctor Strange in the Multiverse of Madness sets up countless possibilities, and some highly anticipated story arcs in the MCU going forward.

Doctor Strange 2 will be in theaters on May 6.