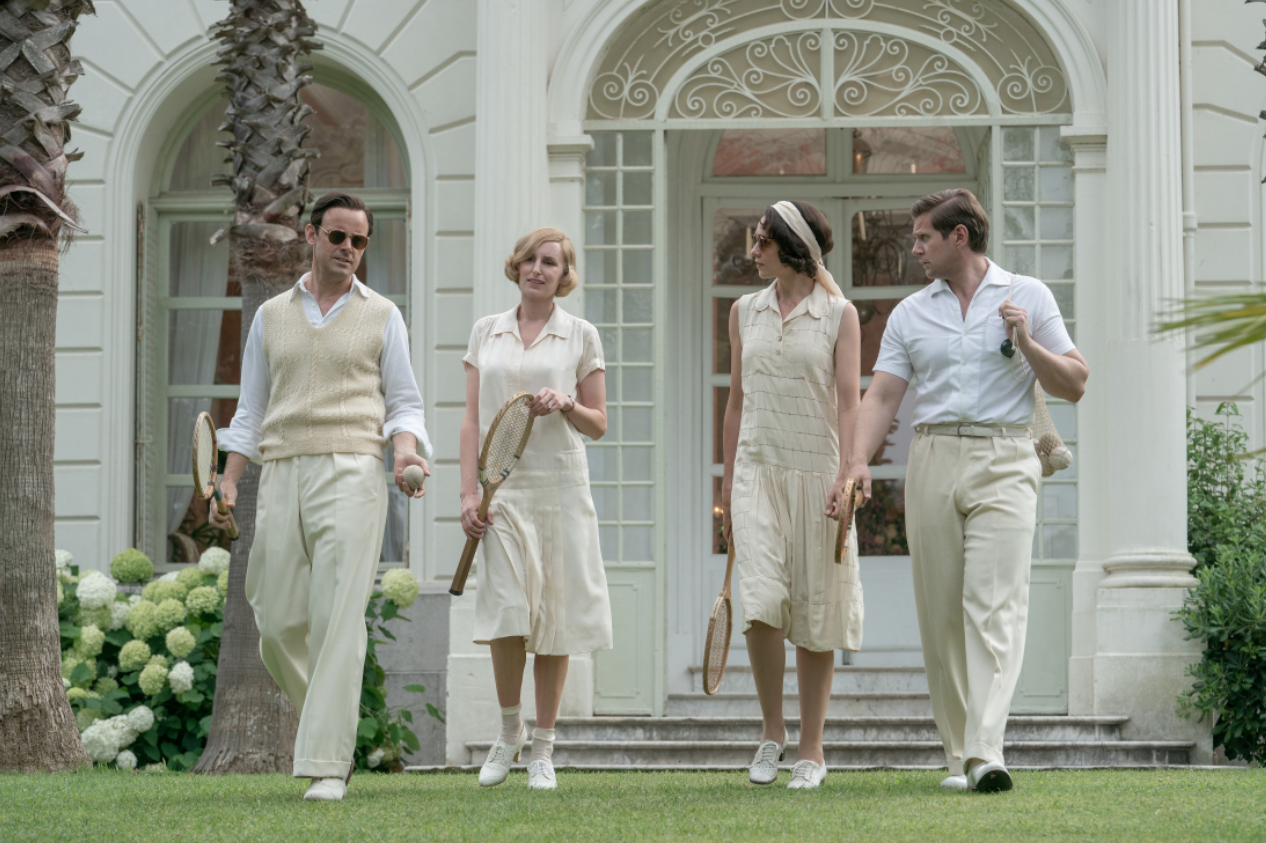 Those nine golden notes of the Downton Abbey theme song are iconic and will hold a special place in my daydreams of traveling around English estates and countrysides. These daydreams only intensify with every viewing party hosted of the Downton Abbey series and the 2019 film, Downton Abbey. Downton Abbey: A New Era is an addition to that list. After laughing, smiling, and crying my way through the film, I walked away feeling like a voyeur of the Crawleys, forever changed by their family-first mentality and grasp of the importance of generational wealth. This family is simply a pleasure to watch on screen (on television or in theaters). It truly is a nice break from the real world.

Downton Abbey: A New Era is brought to you by Focus Features and Carnival Films and written by Julian Fellowes, who created and wrote the series and first film. Directed by Simone Curtis (My Week with Marilyn), Downton Abbey: A New Era catches up with the cast from the first Downton Abbey film. Set in the late 1920s, Lord Grantham (Hugh Bonneville, Paddington) and Lady Grantham (Elizabeth McGovern, Clash of the Titans, 2010) take half of the Crawley family to the South of France to uncover the secrets behind a gorgeous villa that was inherited by the Dowager Countess (Maggie Smith, Harry Potter franchise). The other half of the Downton crew are home with Lady Mary (Michelle Dockery, Anatomy of a Scandal) while a film crew takes over the estate to make a movie with director Jack Barber (Hugh Dancy, Confessions of a Shopaholic) and famous actors Myrna Dalgleish (Laura Haddock, Guardians of the Galaxy Vol: 2) and Guy Dexter (Dominic West, The Crown). The film also stars continued favorites Allen Leech, Joanne Froggatt, Penelope Wilton, Laura Carmichael, Sophie McShera, Phyllis Logan, Raquel Cassidy, Robert James-Collier, Brendan Coyle, Jim Carter, Lesley Nicol, Kevin Doyle, and Michael Fox. Imelda Staunton and Tuppence Middleton take on larger roles as Maud Bagshaw and Lucy Smith.

As the world changes, Downton tries to keep up. From the sinking of the Titanic to the Spanish flu to the golden age of talkies, Downton has seen it all. The formidable force behind the estate’s success and its continued growth is, and will always be, the Crawleys and their servants. This franchise is absolutely character-driven.

Downton Abbey: A New Era showcases the inner transformations and the relationships between characters we’ve seen since the start of the television series back in 2010. We have seen their choices and journeys to self-discovery. We have seen them make mistakes and grow into the people they are now. It helps to have seen, at least, the first film because it enhances the way you will experience the story. It’s easy to walk away from this film feeling like you deeply know and understand these characters. They have clear points of view. They have integrity. Tom Branson (Allen Leech, Bohemian Rhapsody) said it best: “They are foolish and silly at times, but I’ve grown to love them.”

One of the things that stands out about writer Julian Fellowes is the attention and love he shows his characters. It is clear he is a fan of them just as much as the audience. I was surprised and thrilled by the care and attention each character received to move their individual story along while also keeping the film’s entire plot intact. I was most impressed with how Violet Crawley, also known as the Dowager Countess, was handled in the story. We found out in the first film that she was dying. A woman of her fortitude and status deserves the best, and that’s what she got from this story. Maggie Smith really can play the grandmother we all want. Tell me you wouldn’t want Minerva McGonagall from Harry Potter, Gunilla Goldberg from The First Wives Club, Granny Wendy from Hook, Mother Superior from Sister Act, and now Dowager Countess of Grantham as your guide to the world. From young Lady Edith (Laura Carmichael, The Spanish Princess) to Granny Crawley, Fellowes can deliver beautiful stories regardless of the character’s age or status.

The most entertaining parts of Downton Abbey: A New Era are the scenes of Downton with a film crew. It’s almost meta in nature as the Crawleys and some of the staff show their disapproval of filming a movie in their beloved home. The real fun of it all comes from scenes that can happen on an actual set. From random walkers in front of the camera to the breaking of non-prop items in the house and the star-struck lookers trying to get a glimpse of the actors, the reactions and interactions only highlight how great the actors, writer, and director are at making these characters come to life. Mr. Molesley has the greatest character arc from these scenes as his clumsiness and pure joy, highlighted in the first film when he speaks out of turn to the King and Queen, clear the way for him to showcase his hidden talents and finally make a move on his long-time crush. I’m not the only one that clapped during that scene.

Everything about this movie is fantastic. Even what isn’t there is fantastic. The audience gets what it needs from this glimpse into the lives and goings-on at Downton Abbey. It almost feels like you’re watching a documentary where you know the characters’ lives will continue long after the credits have rolled. I would be delighted to have more or be content with where things are at the end.

Focus Features will release Downton Abbey: A New Era in theaters on May 20, 2022.

The Cast of ‘Downton Abbey: A New Era’ is Ready to Take us on a New Journey