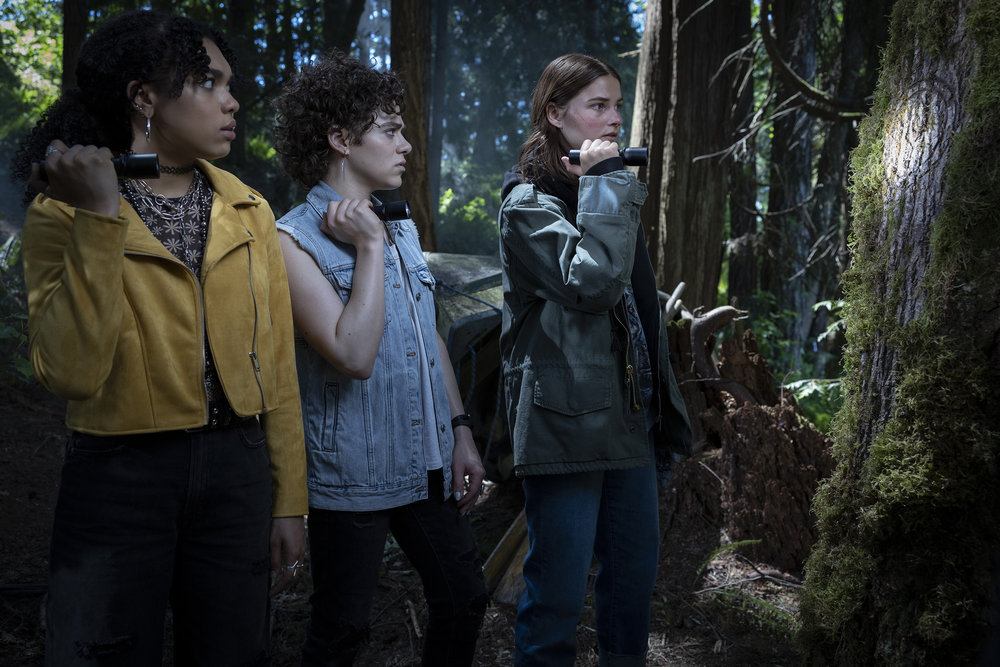 Peacock’s latest original series, The Girl in the Woods, is a supernatural horror drama with monsters, mayhem, and young, complex characters. Krysten Ritter (Jessica Jones), who directed the first four episodes (Jacob Chase of Come Play directed the last four), brings her creative energy to the project, making it dark yet fun. The series was written by an all-female writing team with Jane Casey Modderno (The Birch) as head writer.

The series stars Stefanie Scott (Insidious: The Last Key) as Carrie, Misha Osherovich (Freaky) as Nolan, Sofia Bryant (I Am Not Okay with This) as Tasha, Will Yun Lee (The Good Doctor) as Arthur Deane, Kylie Liya Page (Social Distance) as Sara, Reed Diamond (The Purge) as Hosea, and Leonard Roberts (American Crime Story) as Khalil. It’s produced by Ritter, Modderno, and Chase, along with Jack Davis and Darren Brandl for Crypt TV, Jeremy Elliott, Jasmine Johnson, Joey Greene, and Cameron Fuller.

The Girl in the Woods follows Carrie Ecker, a teenage monster killer who grew up in a cult-like colony. The Disciples of Dawn’s mission is to protect mankind from the horrors of Gehenna, the limbo-like hellscape that lies behind a mysterious door in the forest. Carrie is tasked with guarding this door, keeping these monsters from terrorizing the outside world. The series opens with a bloodied and panicked Carrie fleeing her guardian duties, with a man in a similar beige cult outfit hot on her trail.

Carrie finds herself in the nearby small mining town of West Pine, Oregon. Here, she connects with two misfits — Tasha Gibson and Nolan Frisk. She first meets Tasha, who steps in to help her evade capture and then provides her with shelter and a place to lay low. The two bond fairly quickly, but it takes Tasha’s best friend Nolan longer to warm up to Carrie. Granted, they’re introduced shortly after Nolan’s little cousin Lumi goes missing.

Though Nolan doesn’t trust her, Carrie decides to stay and help find the girl. She believes Lumi’s disappearance is monster-related and knows that she is the only one who can take the monster down. The rest of the series has Carrie teaming up with these two outcasts to rid the town of evil and save their loved ones.

Tasha was immediately my favorite character. She’s the typical teenager who says she hates her small town and can’t wait to get out, but deep down she just wants to get away from the place where her mother died. Bryant brings vibrancy and depth to the character, making her more than just an angsty teen. Her close friendship with Nolan feels authentic, even though their dialogue gets a bit cringe with overused slang and teenspeak, not to mention their obnoxious TikToks.

Nolan’s struggle with identity plays a big role in the series. It’s assumed that an affinity for makeup and nail polish means that they’re gay, but Nolan identifies as non-binary. It’s a heavy discussion that the show handles well, depicting the reality of questioning one’s identity. The series in general largely avoids cliches and presents queerness as more of the norm than an oddity. In an interview with BGN, Sophia Bryant perfectly summed up the series saying, “We’re trying to normalize it and really have the show be about this band of kids coming together, figuring their shit out, and fighting monsters.”

We get to know Carrie through flashbacks of her life in the cult. The brutal training is a rite of passage and everyone’s goal is to sacrifice more than the next person, essentially fighting for the notoriety and status of becoming a guardian. We’re told that the colony doesn’t believe in technology, but Carrie quickly assimilates into modern society, which I found unusual. I expected her fish-out-of-water experience to be longer, but within a day, it’s like she’s all caught up and no longer confused or amazed by everything. However, there’s only eight episodes, so there is not enough time to have Carrie distracted by naïveté.

The Girl in the Woods seems like it could be based on a YA novel, but what’s even more intriguing is that it’s based on two short horror films — Crypt TV’s 2018 short film The Door in the Woods, and its 2020 sequel The Girl in the Woods. The series stays true to some aspects of the films, like a couple of character names and the door’s mythology. Ritter and her team expanded the ideas and built out an entire world, or really, two worlds.

The special effects aren’t the best, but there is some nightmarish imagery. I would’ve liked to see more of the monsters. However, I realize the story isn’t really about them. This series focuses on the characters, and the monsters play a smaller role than you’d expect. It’s more about the idea of keeping demons (personal and/or literal) suppressed and hidden from others.

The Girl in the Woods is a character-driven story with the bleak uneasiness of Channel Zero (particularly seasons “Candle Cove” and “Butcher’s Block”) and a surreal Pacific Northwest town vibe like Twin Peaks. It was less enthralling than I expected, but I was still engaged and invested in the characters’ journeys. I’m interested to see what a second season could bring.

The Girl in the Woods premiered October 21, 2021 on Peacock. All eight episodes are now streaming.