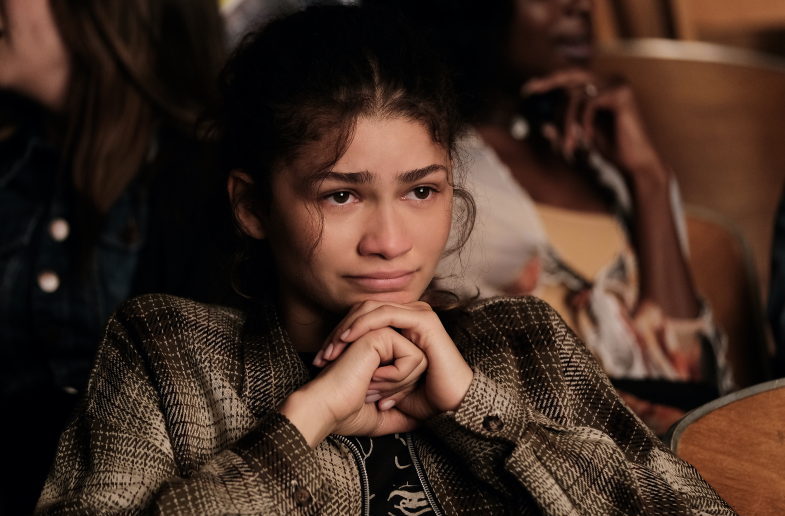 It might have been almost two years since Sam Levinson’s first season of high-school drama Euphoria, but the second season wastes no time picking up just days after the show left off with an explosive New Year’s Eve party that changes everything. Rue Bennett’s (Zendaya) relapse is ongoing, and this time she’s hiding her drug use more efficiently. Jules (Hunter Schafer) struggles with her feelings for Rue as well as redefining her sexuality and gender identity. Maddy (Alexa Demie) and Nate’s (Jacob Elordi) abusive partnership seems officially over, especially since Maddy has found Nate’s father Cal’s (Eric Dane) non-consensual sex tape with Jules. So, of course, Nate would hook up with Maddy’s best friend Cassie (Sydney Sweeney) to keep their toxic dance spinning out of control. Maddy Perez is to Cassie Howard in Euphoria as Crystal Connors is to Nomi Malone in Showgirls, the doomed energy of an inevitable push down the stairs.

Kat Hernandez (Barbie Ferreira) and Ethan (Austin Abrams) at first seem to be the only two of the group on an even keel. A surprising romance begins brewing between drug-dealer-with-a-heart-of-gold Fezco (Angus Cloud) and Cassie’s sister Lexi (Maude Apatow). This is Euphoria High, so the season two opener wouldn’t be complete without the added drama of Fez beating Nate within an inch of his life as payback for Nate getting Fez’s house raided. Euphoria 2’s pure chaos energy spirals outward from there with the addition of fresh characters Elliot (Dominic Fike), Rue’s new drug buddy, and Laurie (Martha Kelly), Fez’s new drug supplier. Laurie takes Euphoria into potential horror show territory with her deadpan sadism, made worse by the fact that Rue now owes her 10 grand. There’s too much going on now for the show to maintain its signature one-character-per-episode narrative structure, and this isn’t a bad thing. Season two is a separate creature from the first, even though it’s the same school year.

On her Instagram, Zendaya warned viewers that while Euphoria might be set amid a high school, this is a show for mature audiences—this season might be particularly triggering. She was not lying. This second season hasn’t only explored the dark side of drug addiction, also began investigating the dark side of sobriety and the difficulties of trying to get sober when you’re actively suicidal like Rue. Rue quietly telling her sponsor Ali (Colman Domingo), “I don’t expect to be around much longer,” is an absolute gut-punch, especially if you’ve been there yourself. I’m 3+ decades older than Rue, and I only stopped having these same internal narratives in late 2021, thanks to a year of intensive trauma therapy. Rue needs trauma therapy too to help process her root and fundamental traumas, but the siren song of addiction is still stronger than the work-intensive call of healing.

Euphoria has been doing some important work around the many layers of addiction and attempting to destigmatize discussions about mental illness and trauma for young and older folks alike. It’s also been providing another important service: Season 2 of Euphoria continues working overtime to normalize male full-frontal on screen. This might not seem like a big deal, but it’s a paradigm reset in visual media to feature exponentially more male full-frontal than the go-to female. For years I was working on an article about how the lack of male full-frontal on screen promotes a myth of male invulnerability, while the proliferation of female full-frontal promotes the sexual objectification of women. But when Euphoria’s infamous locker room scene from season one hit the screens, male full-frontal began appearing more frequently to the point where my thesis no longer held the same kind of water. What’s fascinating is the fact that this particular almost over-representation of on-screen penis is a result of the fact that so many of Euphoria’s women actually asked director Sam Levinson to cut down their nude scenes, and he complied. The result is a weirdly refreshing imbalance in male nudity for once that ends up doing a lot to humanize an entire spectrum of male characters, some of whom aren’t even on screen for long.

But even in editing down the female nudity, Euphoria continues its troubling sexualization, fetishization, and objectification of girls who are supposed to be in high school. This peedo-adjacent gaze is only getting more disturbing with each season. It’s the only part of the show that serves no good social or cultural function and significantly brings down the quality of what might otherwise be considered art.

Between its difficult observations about sobriety’s dark side and an overflow of male full-frontal, Euphoria 2 also dives headfirst into the more meta aspects of the show that involve using art as a vehicle to process and heal trauma. Tired of her sidekick status, Lexi goes self-referential and creates an autobiographical play about everything her circle of friends and family have been through these past few difficult years. The wallflower becomes an active agent in the story, as Lexi creates a moving media collage of fiction, and nonfiction, past, present, and new futures for all the characters after being exposed by Lexi’s play, some for better and many for worse. Sam Levinson uses Lexi’s play as an artful and thoughtful callout/call-in that becomes a powerful catalyst for any number of possibilities for the story going forward.

With the entrance of Lexi’s metatextual play, it becomes clear that this isn’t a show about real-life for today’s high schoolers at all. Euphoria is actually adult wish fulfillment like Dawson’s Creek, One Tree Hill, and so many other narratives where teens are hyperaware, hyperliterate, worldly observationists with brains developed enough to already be retrospective about things that haven’t even happened yet. It’s a do-over of these fraught teenage years where we can make different decisions, advocate for ourselves differently, and maybe even beat the ever-loving crap out of a violent bully like we never did in person, but always wanted to. Thanks to its 90s-inspired looks, Euphoria heightens nostalgia for a certain segment of middle-aged viewers. I was in high school myself in the 90s and have totally seen visions of my own outfits, makeup, and style traipsing across the screen. Like Lexi, I even wrote songs and lyrics for an original play my IB/AP theater class created and performed, which, surprise surprise, was also about a group of friends growing up and growing apart. Stand By Me was one of our inspirations back then, too. There’s an aspect of time travel in Euphoria we can only achieve through a fictionalized version of the past, and Lexi’s play becomes a trauma therapy processing tool by the end. To create something that reflects your own experiences, a thing of uncomfortable beauty, and then find the courage to share it with others. After all, Euphoria is also Sam Levinson’s imaginary memoir.

Euphoria’s sophomore season ends in an entirely different burst of chaos than it began with, and the fates of several main characters hang in a dark balance until we see them again. But not Rue, who seems to have finally found some emotional grounding through sobriety and also, ironically, seeing herself reflected through Lexi’s loving gaze in a play that was devastating for so many others. With so many loose threads still hanging, hopefully, we won’t have to wait another two years for Euphoria’s glitter-laden tapestry to weave all those dangling plots into the bigger narrative.