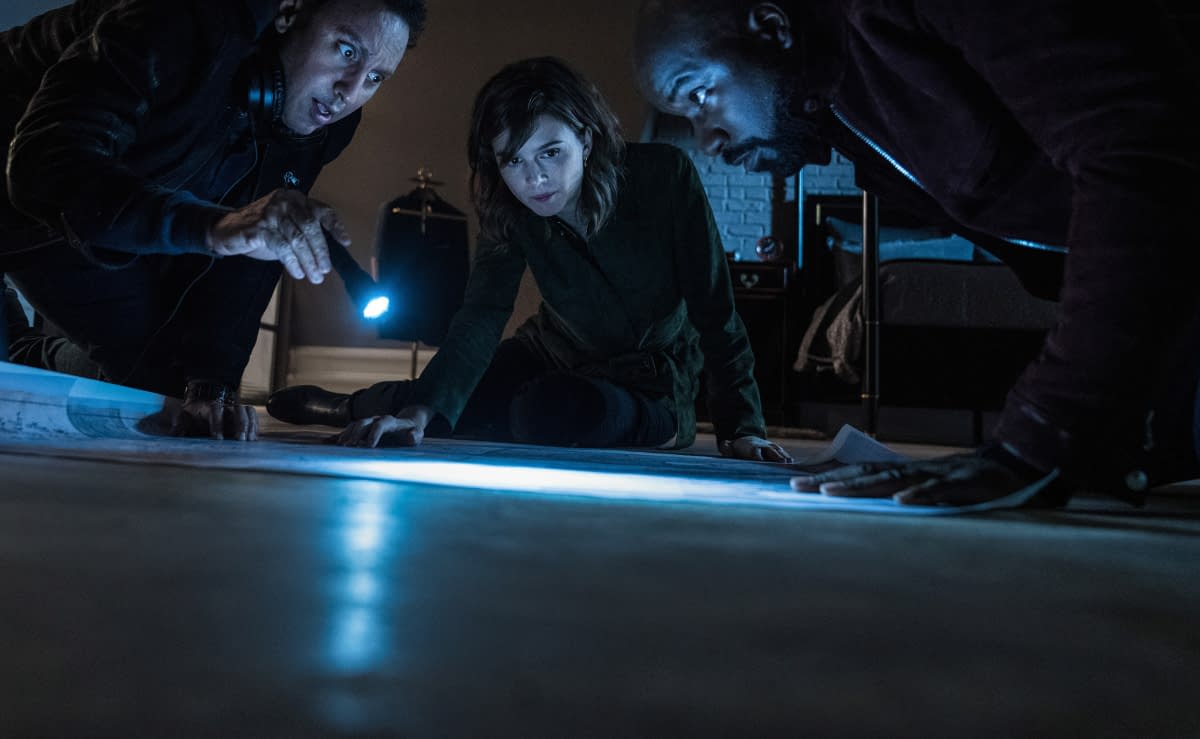 Warning: Spoilers for seasons 1 and 2 of Evil.

Writer-producer duo Robert and Michelle King (The Good Wife, The Good Fight) are back with the third season of their horror crime drama Evil. Its new home at Paramount Plus gives the series the freedom it needs to get even weirder and more daring. Robert told Entertainment Weekly, “The show works best for us when it plays the game of the supernatural, but it also shows how the supernatural can be a psychological condition.” Evil creatively touches on social issues like racial bias, body image, white privilege, and mental health, while maintaining its “out there” quality — keeping it weird but valuing intelligence.

Season one introduces us to forensic psychologist Kristen Bouchard (Katja Herbers). She’s recruited to work as an assessor for the Catholic church with priest-in-training David Acosta (Mike Colter) and tech expert Ben Shakir (Aasif Mandvi). Together they investigate supernatural phenomena, but it’s not just Latin-speaking demons and theatrical exorcisms. They also look into unexplained miracles, prophecies, and other weird things like teenagers who compulsively hum the same song until they puncture their eardrums.

David, Ben, and Kristen meet while working on the same case of Orson LeRoux (Darren Pettie), a man arrested for serial murder. His wife believes he’s possessed by a demon, and she’s right. LeRoux had been communicating with Leland Townsend (Michael Emerson), a man, or maybe a demon, who causes all kinds of trouble. He has it out for the do-gooders, particularly Kristen. He dates her mother, Sheryl (Christine Lahti), tries to befriend her four daughters, and generally just tries to screw up her life personally and professionally. Leland’s also appeared to David, taunting him for his doubts in faith and past indiscretions.

The first season follows a case-of-the-week structure, sending the assessors to evaluate child psychopaths, alleged prophets of God, and a myriad of possessed individuals. Kristen and David try to establish whether something has a scientific explanation or a spiritual one — while Ben checks for gas leaks and hacked electronic devices. Their three different areas of expertise make for interesting episodes. Instead of constantly arguing, they find a way to work together without disrespecting each other’s beliefs or non-beliefs.

Season two picks up right after Kristen kills LeRoux for harassing her and threatening the lives of her daughters. Her skin burns when it comes into contact with crosses, implying that killing him made her evil. The season has the trio encountering new supernatural situations like a fire jinn, Satanists, ghosts, angels, and cannibals. There are also some new characters such as Sister Andrea (Andrea Martin), a nun with uncompromising faith who becomes a spiritual advisor for David, and a spiritual rival for Leland.

Season three begins where two ended – Kristen confessed to the newly ordained David that she killed LeRoux to protect her daughters, an intense moment between the friends/colleagues. After two seasons of unwavering sexual tension, the Kings ended the “will they or won’t they” with David and Kristen. They’ve finally kissed, and now it’s just a matter of how it affects their relationship. Their forbidden love was intriguing for a while. A married woman lusting after a sexy priest-in-training and vice versa – scandalous! However, David is an official priest now, and Kristen is still very much married to Andy — who pops in and out, trying to sell the climbing business so he can be at home.

Aside from romance and sex, the third season throws new challenges at the characters. David, or Father Acosta, struggles with his life as a priest, the boredom and monotony of daily mass, confessions, and hanging out with men much older than him slurping soup. He reluctantly gets involved with an espionage group within the Catholic church ominously known as “the Entity.”

Leland is still up to no good, raising hell. In the last season, Leland approaches the church for an exorcism which David, Ben, and Kristen know is just him challenging them. But his act paid off as he’s now employed by the church — that is when he’s not juggling his various schemes. Sheryl still mingles with Leland and the cannibalistic Satanists. She’s up to something with the creepy Eddie dolls and her new job, but her motivations and state of mind aren’t quite clear.

Evil has an incredible ensemble cast with great chemistry, many of whom haven’t delved into the horror genre before. This season, some supporting characters get more screen time like Sister Andrea, Kristen’s growing daughters Kristen’s four daughters – Lynn Bouchard (Brooklyn Shuck), Lila Bouchard (Skylar Gray), Lexis Bouchard (Maddy Crocco), and Laura Bouchard (Dalya Knapp), and her psychiatrist Dr. Kurt Boggs (Kurt Fuller). Ben’s sister Karima (Sohina Sidhu) also gets more involved and starts helping her brother with some unanswered questions. You’d be surprised how many hackers and clout chasers there are who like to play with people’s fear, or maybe, it’s not that surprising.

There are several themes in Evil — temptation, faith, and of course, the nature of good and evil. But one that really stands out is the relationship between evil and technology. So far, all seasons have explored how the internet heavily influences the behavior of children and adults alike. From deepfakes to incel culture, Evil delves into all the ways technology provides unique tools for spreading terror and hopelessness while encouraging others to do the same. Kristen literally has to tell her girls, “No doomscrolling before breakfast.”

The trailer shows the return of George, Kristen’s nightmare demon from season one, who moved into the role of fourth-wall-breaking narrator in season two. The show’s demons and monsters vary in their fright levels. It seems like, the more they talk, the less frightening they usually are.

Moving the show from network to streaming was the best decision for a few reasons, mainly the creative freedom it allows the Kings. It does creepy very well, but now they can venture farther into the horror. Thankfully, they don’t throw in a bunch of cursing and nudity just because they can. It feels more grounded in reality — because, as Katja Herbers said in an interview with TV Guide, “I think Kristen should be allowed to say f**k after the things that she goes through.” I’d have to agree.

Evil is surprisingly funny, but considering the bonkers situations the characters get in, sometimes all you can do is laugh. “We’re not just creating absurdity. It’s about the psychological states of these characters who have to deal with the absurdity around them,” Robert told The Hollywood Reporter. It’s been likened to The X-Files and Twin Peaks due to its overall surreal tone and imagery and ability to be disturbing, insightful, and ridiculous all at once.

Evil continues to explore the connection between the real and the supernatural without telling us which is right and which is wrong. Robert and Michelle King are known for their drama series, but they’ve proven that they know what horror fans want while appealing to other audiences at the same time. While the third season may not be quite as exciting as the previous seasons, or at least the first half I was able to screen, I don’t doubt that it’ll get there by the end.

The third season of Evil will premiere Sunday, June 12, 2022, with later episodes dropping weekly on Sundays on Paramount+.