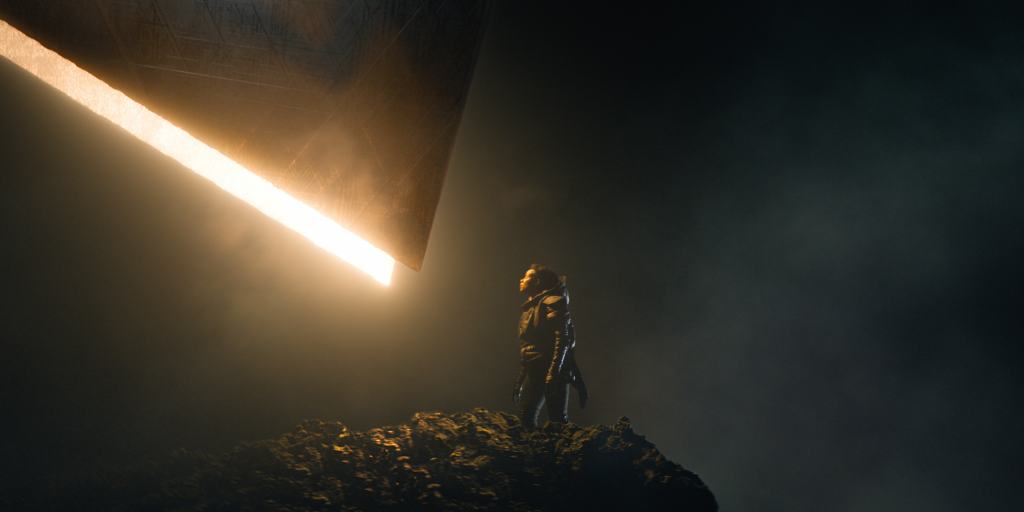 Foundation has been a long time coming for David S. Goyer (The Dark Knight) and Josh Friedman (Terminator: The Sarah Connor Chronicles). It’s wildly ambitious to adapt Isaac Asimov’s Foundation book series for the screen since the books have been deemed unfilmable for decades. But these creators finally did it. The result is visually stunning but daunting in plot and dialogue.

Foundation is a collection of plotlines that spans centuries across galaxies. Emperor Cleon, who is actually three clones, is the almighty ruler who lives on Trantor, referred to as the “machine world” by one of the outer planets’ inhabitants. Their genetic dynasty is criticized by many and becomes a major factor in the overall plot. When Dr. Hari Seldon, an eccentric mathematician, predicts the fall of the Galactic Empire, he’s exiled to another world with his assistant Raych and young math genius Gaal. As Hari says, “Change is frightening, especially to those in power.”

The book series doesn’t focus too much on characterization as it does science and mathematics. If Goyer and Friedman followed that model faithfully, it wouldn’t make for much of a series. It’s easier to connect with characters than ideas. In an interview with Polygon, Goyer said, “I think any reasonable person could read the books and know that it would be impossible to do a one-for-one, line-for-line adaptation of it.”

The TV series has an exceptional cast of both veteran and emerging actors. Lou Llobell and Leah Harvey deliver breakout performances. Llobell’s Gaal is an isolated mathematical genius shunned by her home world. Underneath the know-it-all exterior, she’s a caring person who wants to make a difference. Harvey’s Salvor is a total badass who’s focused on protecting her world as the warden of Terminus. Both characters are curious, rebellious, and headstrong.

Jared Harris is perfect as the revolutionary Hari Seldon, giving an interesting balance of egotistical academic and genuine mentor. Lee Pace plays the central Emperor clone, Day, with a stoic fury and bluntness that occasionally explodes into frustrated outbursts. Their interaction with each other is less engaging than expected. Honestly, there’s more tension between the three Cleons most of the time.

The time spent with Hari and Gaal is more interesting than anything with the Empire. Things move faster with them in contrast to the uneventfulness of the clones and their robotic aide Demerzel. But Salvor Hardin carries most of the action. Hardin and the future inhabitants of Terminus are the main physical fighters of the series, while the other characters are preoccupied with verbal battles.

There are a few romantic relationships among characters that create emotional moments but fail to leave a lasting impression. The constant jump through time includes quickly switching between love stories, so as soon as we’re invested, we might not see that particular relationship again for an episode or two. That goes for any of the characters’ journeys as well. Watching episodes week-to-week versus bingeing all 10 at once might make it even more difficult to stay engaged.

Avid science fiction fans, especially those who don’t like the necessary changes involved with adapting a book series into a TV series, may not love Foundation. I’d be lying if I said this show isn’t confusing. The timeline jumps around a lot just in the first two episodes, though it becomes less jarring further into the series. The majority of the show is about math, obviously. So, if that’s not something that interests you then you probably won’t enjoy it. However, the interpersonal relationships and brilliant production design kept me watching, despite not fully understanding the show’s intricacies.

The work of production designer Rory Cheyne (Locke & Key) on the series is phenomenal. Rich, galactic settings and breathtaking landscapes are something this show does incredibly well. It has a similar palette as The Mandalorian, but with bouts of more colorful sequences. The opening credits are worthy of avoiding the skip option.

Foundation is reminiscent of many epic science fiction works, the most obvious being Star Wars. However, the show does set itself apart from others, as well as from its source material. It’s not super exciting, but its visuals and acting make for a captivating space drama.