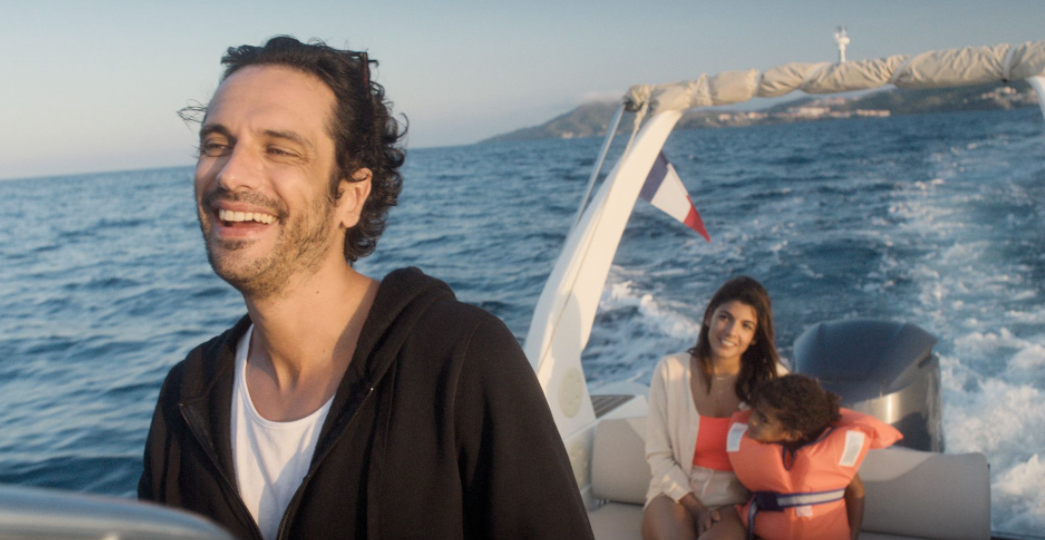 The French know how to take a vacation. But for hard-working devoted husband and loving father Fred (Oumar Diaw), the challenge is money.

In the film Holidays at All Cost, Fred has meticulously calculated his overtime pay to be able to cover a beach resort vacation for his wife Aurélie (Audrey Le Bihan) and young son to her hometown in the south of France. His boss Toussaint (Antoine Schoumsky) has promised to pay Fred under the table in cash but when Fred comes to collect, Toussaint plays the “I’m a small businessman with no money” card and Fred walks away empty-handed.

Determined to go on vacation, Fred steals his rent check back from the mailman, thinking he can enjoy a vacation with his family and worry about rent when he returns, but his wife inadvertently mails the check right before they head off to the beach. It’s a good thing the resort that Fred has chosen is owned by Jean-Luc (Benjamin Garnier), an old friend of the couple. Fred tells Jean-Luc his financial dilemma and Jean-Luc says it’s not a problem — just come and enjoy a vacation and do some odd jobs around the resort in exchange. Fred is grateful for the opportunity to enjoy the beautiful facilities, but Jean-Luc, who has always been in love with Aurélie, has a plan to break up the marriage and win her over.

Oumar Diaw is a lovely actor whose portrayal of Fred gives this character a gentle beauty.  Fred is a man in love with his family, and he just wants to give his hard-working wife a break in a beautiful location. Diaw’s portrayal of Fred is the best thing about this film, and it literally ticked me off to have to witness such a beautiful person enduring the downright abuse of all of the other adults in the film. The best moments of Holidays at All Cost happen between Fred and his son. Witnessing the moments of unconditional love between this father and son made me happy.

The rest of this film is an unfunny hot mess. The script is predictable, and none of the characters have any redeeming qualities. There’s no chemistry between Fred and Aurélie. Jean-Luc, the old friend who puts Fred through the wringer to steal his wife, is this weird combination of mean and creepy that doesn’t work. There is absolutely nothing likable about Jean-Luc. It’s also not believable that Fred would just meekly do all of the tasks these horrible French people who work for the resort tell him to do. Particularly infuriating is the first task Fred is given — cleaning up one of the guest rooms. Watching this section of the film really pissed me off: the entitlement, the filth, the downright disrespect. It made me angry that the writer and director would have the gall in this day and age to make an actor play a role like this.

From Fred and Aurélie’s first moments on screen, the couple has no chemistry. The writing gives no space or opportunity for viewers to see the love. The film dives headfirst into the farce without building the relationships so that we actually care for this marriage to work. As an audience member, I felt no emotional stakes in order to invest in this couple.

Every person Fred encounters other than his son is a jerk. The film seems like it lasts for a lifetime and towards the end, I started even getting angry at Fred. Why is he so gullible? Why is he letting these white people mess with him like this? Can’t he stand up for himself?

It’s really hard to watch the scene where Fred is tased and arrested for picking up roadkill, which turns out to be a protected species, without a permit. In the police station, he tells the officer that he’s working for his friend, but when the officer calls the resort, they pretend that they don’t know Fred, making him spend the evening in jail. There happens to be a trans person in the cell with him. Of course, the obvious low-brow unfunny jokes are made about identity, and Fred is released unrealistically.

Holidays at All Cost is one of those films where the audience should laugh and, in the end, have the good feeling one feels after going on a journey with characters they care about. But for this viewer, it’s one of those movies that I resent because I will never get the time I spent watching this mess back. These kinds of films should make us lose ourselves in the beauty of the locations. These kinds of films should actually be funny. Time literally slowed down as I was watching this movie and I just wanted it to be over. In the end, Holidays at All Cost is the kind of flick that I imagine, the actors wish they hadn’t done.

Holidays at All Cost screened at Urbanworld.