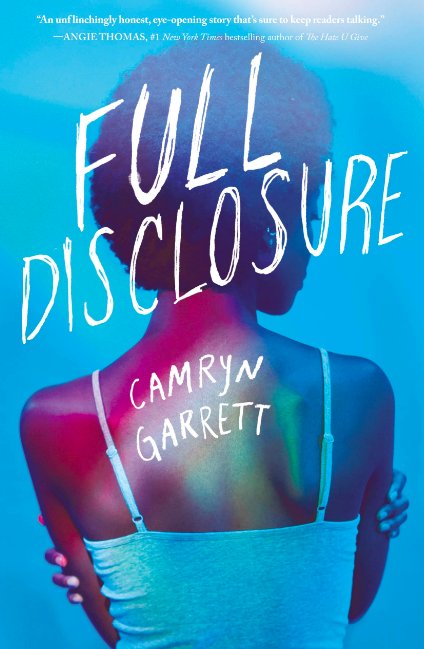 We’re a few weeks out from the New Year now, so I’m just gonna go ahead and call Full Disclosure by Camryn Garrett the wokest YA novel of 2019.

Racially diverse, LGBTQ friendly, sex-positive, and endlessly thought-provoking, Full Disclosure feels like a representation of what the world is and has been for a while. There’s no spoon-feeding or hand-holding when it comes to introducing the various backgrounds, family dynamics, and identities of the characters. We learn about who everyone is in a casual tone that says: “It’s 2019 and this is incredibly normal.”

Simone Garcia-Hampton is a budding theater prodigy with a mental encyclopedia of musicals. She’s directing her high school’s production of Rent (to the joy of some and the irritation of others), and she’s got an eye for the role of director. Only one thing seems to be able to take her mind away from the stage: cute, somewhat musically inept stage boy Miles. Yet just as her crush begins to manifest into something more, shall we say, touchable, an anonymous stalker is threatening to expose her if she doesn’t start putting some distance between MIles and herself.

Simone is HIV-positive. And while she certainly knows that her status is far from a death sentence or a threat to anyone, popular ignorance puts her at risk. After facing wide-spread rejection and isolation at her old school, Simone just wants a fresh start to enjoy the rest of her high school career without people getting nosy and cruel about her medical history. It’s hard enough trying to figure out how to talk about her status with friends, much less a could-be boyfriend. But given how well things are going with Miles, it seems like the past might have to repeat itself.

I don’t have any personal connection with HIV or the AIDs crisis (as far as I know). This book shined a light on my own ignorance towards the topic, and for that I am immensely grateful. I don’t think it’s a stretch to say that for most of us who came out of the American public education system, we were done a disservice on a lot of topics that fell under the umbrella of “health class” and/or “sex ed.” HIV and AIDS were definitely among those taught-but-not-really subjects. I found that I was just flat-out wrong about many things regarding how HIV is contracted, protecting against the virus, and how those who are positive learn to live with and manage it.

On the flip side, so much of Simone’s story was incredibly easy to identify with. Her overprotective dads, well-intentioned and loving as they were, still managed to be a massive source of frustration for a sexually curious teenager. Her struggles to feel “queer enough” among her friends and not be seen as an experimental straight girl hit close to home for me. Trying to find security and acceptance in LGBTQ spaces as a bisexual person (especially one in a straight-passing relationship) can be tough. I appreciated Garrett’s exploration of these types of complex inter-community struggles. Full Disclosure does with ease what a lot of media wastes time wringing its hands over; it doesn’t just offer diverse representation, but it looks at how the intersections of different identities actually affect people on a regular day-to-day basis.

I loved Garrett’s writing in large part because it subverted so many tropes that I’ve come to expect in YA. It avoids a lot of the less sensible beats inherent to stories involving romance, blackmail, and secrecy. Instead, it offers a lot of teachable moments about the kind of communication that builds healthy partnerships. The characters were well-rounded, and I found myself siding with almost everyone at one point or another. I’m also not exaggerating when I say this has some of the most authentic teen dialogue I’ve ever read. Reading scenes of Simone with her best friends felt like reminiscing over conversations I had in high school. This is perhaps unsurprising given that Garret finished the novel when she was seventeen.

Simone’s story reminded me of the importance of practicing empathy and putting yourself in the shoes of someone whose experiences are leaps and bounds beyond your own. Even as a Black bisexual woman, lingering at the intersection of several different types of oppression, I found myself shocked at my own capacity for ignorance and bias. It’s sometimes easy to take one’s own understanding of marginalization for granted. There are always new communities, identities, and experiences worth learning about as an outsider.

Full Disclosure is a powerful pushback against stigma, an enlightening delve into an underrepresented topic in the genre, and a reminder to practice empathy no matter who you are.

Reexamine what you think you know.