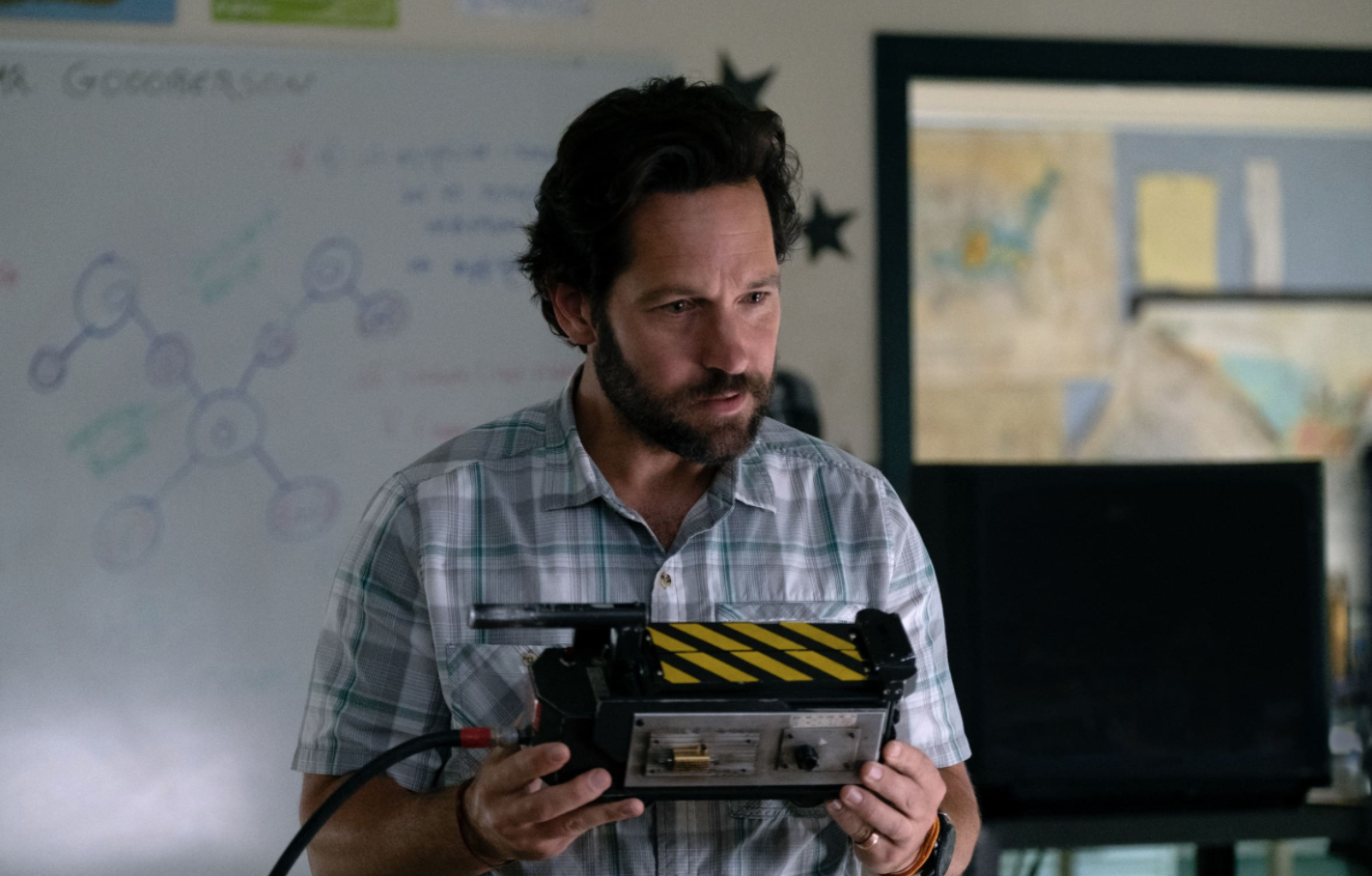 Ghostbusters. We have had summer blockbusters, animated tv shows, video games, toys, costumes, and even a franchise reboot (Ghostbusters, 2016). Following behind his father Ivan Reitman, director Jason Reitman now expands the Ghostbuster universe with a sequel to the 1984 and 1989 films (Ghostbusters and Ghostbusters II) with Ghostbusters Afterlife.

If there were one word to describe the movie beyond fun, it would be nostalgic. Nostalgia invades the senses as audiences see tons of easter eggs and reminders of iconic moments from the original. It’s a great film full of scares, laughter, and sentimental moments. The cast is the perfect combination to bring this story to life. This fall, we get to meet a new team of misfits.

Ghostbusters Afterlife is written and directed by Jason Reitman (Juno, Thank You for Smoking) and follows a single mom Callie, who moves her son and daughter Trevor and Phoebe, to Summerville, a small town in Oklahoma, hoping to get some cash from the property her estranged father left her when he died. Amidst the story of family and all the ups and downs that come attached, Summerville has unexplained earthquakes and strange events that no one seems to worry or care about. It’s up to this family to discover the secret and unearth the past that is connected to the infamous Ghostbusters. The film stars Carrie Coon (The Leftovers, Gone Girl), Paul Rudd (Ant-Man, I Love You, Man), Finn Wolfhard (IT, Stranger Things), Mckenna Grace (The Haunting of Hill House, Troop Zero), Celeste O’Connor (Selah and the Spades, Freaky), and introducing Logan Kim in his first feature film.

The song titled “The Bones” has a line that says, “When the bones are good, the rest don’t matter.” That’s how I feel about Ghostbusters Afterlife. The script is fantastic. The dialogue is perfect. The language doesn’t seem forced, nor does it feel like there’s talking for the sake of talking. The dialogue is there to enhance the film, not explain every detail. It’s funny, witty, and faithful to its origins, even having some aspects of Ghostbusters 1984 in there. Reitman directed this to perfection. Every scene is necessary and fun. It’s streamlined and paced without fault. At no time did I get bored or think, “When will this be over?” There’s a method to the reveal, and it is rewarding. Reitman also created a great style with this film. Ghostbusters Afterlife is visually pleasing and utilizes the small-town Midwest charm to its benefit. Good-bye skyscrapers, hello cornstalks.

While some of the material may be repetitive, the cast does a great job of making it their own. Humor is laced throughout the film as in the other Ghostbuster films. The standouts in the film are Paul Rudd, Mckenna Grace, and Logan Kim. Rudd plays summer teacher Gary Grooberson. Instead of teaching kids who could care less, he shows horror films. At his core, he is a seismologist who wants to get to the bottom of what’s making the town shake. Rudd’s comedic talents, as well as acting talents, shine in this role.

His character Gary easily finds a kindred spirit in Phoebe, played by Mckenna Grace. Phoebe is the young, super-smart — I’m talking genius level — daughter of Callie (Carrie Coon) who is destined to be a scientist of some kind. Technology, mysteries, and puzzles thrill her, but she also has no friends and finds it hard to talk to people. Jokes become her way of breaking the ice and communicating with people around her. Mckenna embodies the character. She is a gifted young actress. I am always excited to see what she will do next. It was fun to see her in a mega-franchise like Ghostbusters.

Login Kim plays Podcast, the nerdy sidekick who loves all things spooky. He is truly one of a kind and finds nothing weird about Phoebe. They quickly move from lab partners to best friends. Podcast has the best facial expressions and responses, from something as simple as a podcast to something as mind-blowing as a ghost.

The 1980s were a different time for special effects, so I was surprised that the special effects for Ghostbusters Afterlife weren’t blowing my mind. I felt like some of it was still stuck in the ’80s or a really bad TV series. Either way, some of the visual effects were not up to par. With the subpar CGI, some scenes came off a bit cheesy.

Fans of the original 1984 Ghostbusters will have fun with Ghostbusters Afterlife. You will laugh; you will be thrilled. It truly is a love letter to the original and the fans. You can tell everyone involved is a fan of the franchise. But if you haven’t seen 1984 Ghostbusters, have no fear, you will still have a good time. There are twists, turns, and surprises for all.