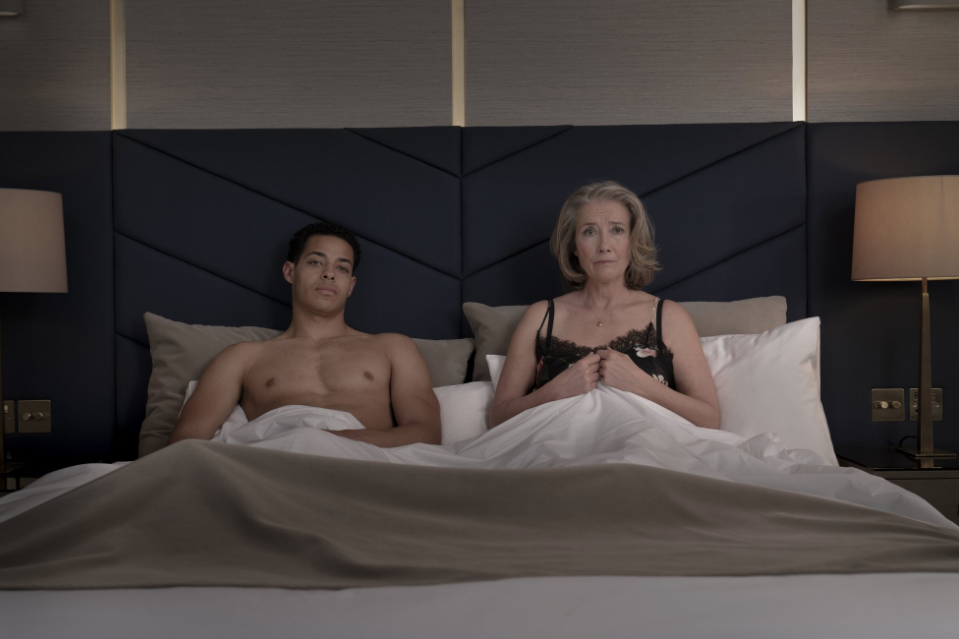 Good Luck to You, Leo Grande is deliciously sexy and overflows with middle-aged white female body positivity, but I just couldn’t get past the glaring colonist overtones.

Nancy Stokes (Emma Thompson, Sense and Sensibility) has been a widow for 2 years after 30 years of marriage. She has never had an orgasm and is now ready to rumble. Nancy chooses a handsome young Black biracial sex worker, Leo Grande (Daryl McCormack, Peaky Blinders) to cross some sexual experiences off her bucket list. She books the time at a fancy hotel, puts on her sexiest retired school teacher lingerie, and approaches the task like any proper British schoolmarm would — with pained, proficient, guilt-ridden gusto.

As Leo Grande, Daryl McCormack is just lovely to watch. Combined with an unexpected Irish accent, he’s perfect for this role. And, to be clear, I love Emma Thompson. Emma Thompson as this mother/teacher/widow who has never experienced sexual pleasure is funny, fearless, and fantastic. From the very first beat in this film, the audience feels Nancy’s profound anxiety, excitement, and a million other feelings that a woman must have when meeting a sex worker for the first time.  But writer Sophie Hyde (52 Tuesdays, Animals) misses the opportunity to write a sophisticated, nuanced story that includes the sexualized racial dynamic in this situation.

In the age of performative white liberal wokeness, “colorblind” casting seems to be all the rage. However, most white writers avoid building the reality of racial dynamics into their stories. If you’re going to cast a biracial Black man in a role where his purpose is to be in sexual service to a white woman, why don’t you incorporate the impact race has on the relationship?

Good Luck to You, Leo Grande only has two main characters and the run time of this film is ninety-seven minutes, which is more than enough time to acknowledge the racial dynamic. Why is it that dominant culture is so quick to not name the reality of our power structure where white women are simultaneously victims and victimizers? You can’t just throw people of color on screen and ignore the fact that we live in a world where being a person of color impacts every relationship, particularly when the story deals with sex and, at the end of the day, power.

While Good Luck to You, Leo Grande is unapologetically brave when it comes to the issues of middle-aged white women who want to be seen beyond motherhood and be accepted with wrinkles and belly fat, writer Katy Brand basically treats Leo as Miss Nancy’s human sex toy, glossing over her position of power as she exoticizes Leo. Why is it that the entertainment industry has completely normalized exoticizing men of color as an object of sexual pleasure for white women of all ages?

In shows like Bridgerton, race is ignored, which is unfortunate. We all know the long, deep history England has with colonization. We’ve always had white folks sexually dominating people of color in Western culture, and that power dynamic bleeds through in romantic interracial couplings in real life, but the majority of white writers don’t ever allow themselves to reveal that in their work. This film was really good, but I just couldn’t stop thinking about how I was getting emotionally attached to a story about a white woman finding her sexual liberation by purchasing a Black man’s body for the evening to service her.

As Leo would comfort Nancy’s lamentations about not being seen as a sexual being, I’d notice Leo’s Irish accent and wonder what must it have been like for Leo to have grown up in Ireland as a biracial Black kid who I’m sure was the only child of color in his area. The film does go into Leo’s relationship with his mother, but doesn’t reveal if his mother was Black or white. Adding the small detail of his mother’s racial identity would have layered in complex conflict to the story arc of these two characters, which would have made the ending feel earned. I wish the writer had done the work to go beyond her own personal experience and acknowledge Leo’s racial identity. But I don’t know if she has what is required to provide the racially nuanced storytelling the audience could really chew on.

Overall Good Luck to You, Leo Grande is a great film. It’s super sexy, it lightens the heart, and the main subjects are body image and ageism. But if you want to center body image and ageism without dealing with the racial aspect, you’re going to have to cast a young white male actor in Leo’s role or cast a middle-aged Black woman as Nancy. It’s like Chekov says — if there’s a gun on stage in Act 1, someone’s gotta be firing it by the end of the play. It’s there for a reason.

Back in the 1760s, white folks created “race” as a social construct to dominate everyone else and maintain power. When it comes to “race” as the descendants of its creators, white people are actually the experts. So, why aren’t modern-day white folks able to incorporate their creation, “race,” into their storytelling?

There is no such thing as “colorblind casting.” We see color. Casting people of color and ignoring their color in your story is performative allyship, and it isn’t enough.

Here’s What We Know About Disney’s Upcoming Film, ‘Cruella’