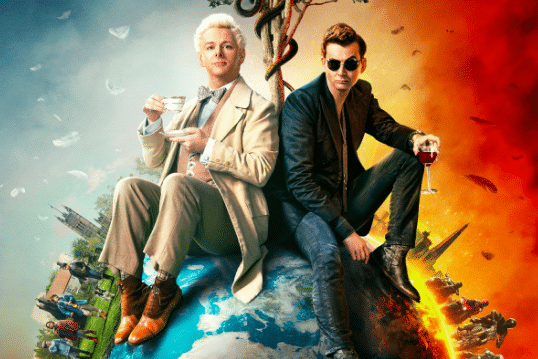 The is the one fans of Neil Gaiman have been waiting for — those who are American Gods fans and those who simply love anything he does.

This is Amazon Studio’s adaptation of Good Omens, and it’s taken years to finally get it to production. Since filming wrapped, the show has been teased by the author and by Amazon for the last six months or so. 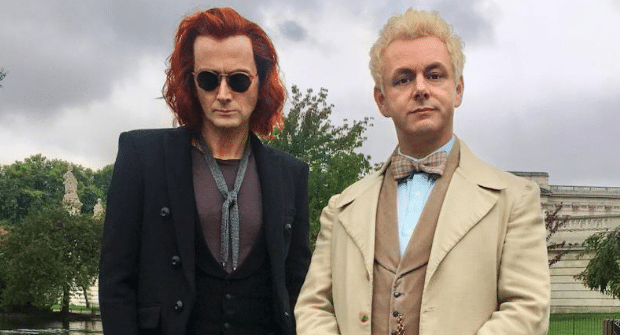 Tennant and Sheen play a demon (Crowley) and an angel (Aziraphale), respectively, with a love of the good things life on Earth has to offer. Everything is good until word comes that the Antichrist is about to be born, which is the beginning of the end of the world. The angel and the demon aren’t ready for that. They make a plan to watch over, aka influence, the child so he never becomes too evil. Before this can be done, a baby switch causes chaos.

Depending on how fans think of Sheen and Tennant in other roles, they may be curious to see what each actor does with characters that are supposed to be (wink) all good or all bad. Tennant plays demon Crowley with relish, as if he just ate the best meal in the world.

But it’s really the chemistry between Tennant and Sheen that seems to work best. These two play friends in serious bro-love. Sheen’s prim and proper angel and Tennant’s bad-boy devil are besties, no doubt about it — and the actors nail that.

However, bringing everything to life that is in the book takes some doing. This is a comic fable; a magical imagining of the end of the world based on the book Good Omens: The Nice and Accurate Prophecies of Agnes Nutter, Witch, written by late fantasy novelist Terry Pratchett and Gaiman. There are a lot of characters, a lot of subplots, and a lot of connecting the dots needed. 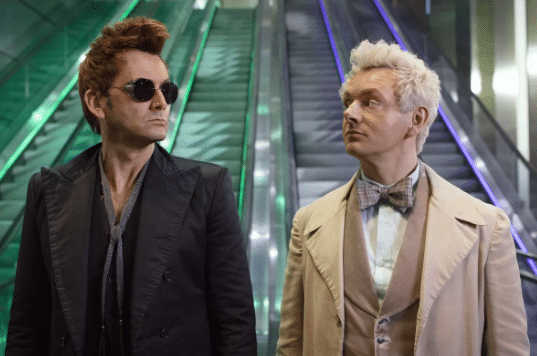 Kudos to Gaiman for getting so much on screen that was in the book. However, it can be a lot to follow and some scenes to go on a little too long. Some actors appear on screen for only a few minutes while others playing minor characters stay around like a too-long running joke.

Sometimes the inside jokes are clever such as the line, “As if Armageddon was a cinematographic show you wished to sell in as many countries.” Others would be only understood by Anglophiles (such as witty but insulting references to controversial former British parliament member and novelist Jeffrey Archer or Brit historical figure Dick Turpin). Since Good Omens is a international production, it might have been better to leave out lesser-known Brit-centric details. Look for the nod to American Gods though.

Young Sam Taylor Buck plays the Antichrist with nonchalance but in some scenes is really chilling, which, as the Antichrist, he probably should be. (Can anyone say The Omen?)

Meanwhile, Hanna’s Mireille Enos does a brief star-turn as one of the Four Horsemen of the Apocalypse. It’s a stand out moment for a gifted actress who rarely goes for over-the-top roles (ABC’s short-lived The Catch being one of them).

Similar to American Gods, the Four Horsemen of the Apocalypse each represent one of society’s ills. Instead of the God of Technology in Gods, Omens has the God of Pollution and the God of Famine.

British actress Miranda Richardson isn’t seen until far into the series, but her role is significant, requiring a lot of physical acting. She does it well.

Jack Whitehall is a bumbling, would-be accountant and witch hunter who meets the alluring witch (Adria Arjona, Emerald City, True Detective), a descendant of Agnes Nutter. There is far less chemistry here than with Sheen and Tenant. Despite their crucialness to the plot, the scenes between Whitehall and Arjona seem drawn out and out of place compared to the action elsewhere.

Jon Hamm is Tennant’s only acting rival in the way he appears to enjoy his role. Hamm’s cocky archangel Gabriel is both funny and menacing. He plays him as if he’s the guy in the boardroom that knows everything but really doesn’t. The story’s narrrator, God (Frances McDormand) is the knower of all, and She is never seen. McDormand’s God tells the tale and merely observes.

Good Omens can be offensive, but that’s part of the appeal. In this fantasy world, everything deemed good and bad is turned on its head. The story is told in a fantastical way that would be similar to a good children’s book, were it not for some moments of dark humor and light horror.

The show doesn’t really present an argument about religion or whether there is an afterlife. The last days are played for laughs, and those who could never really be heroes become heroes. The message is that people are complex but inherently good.