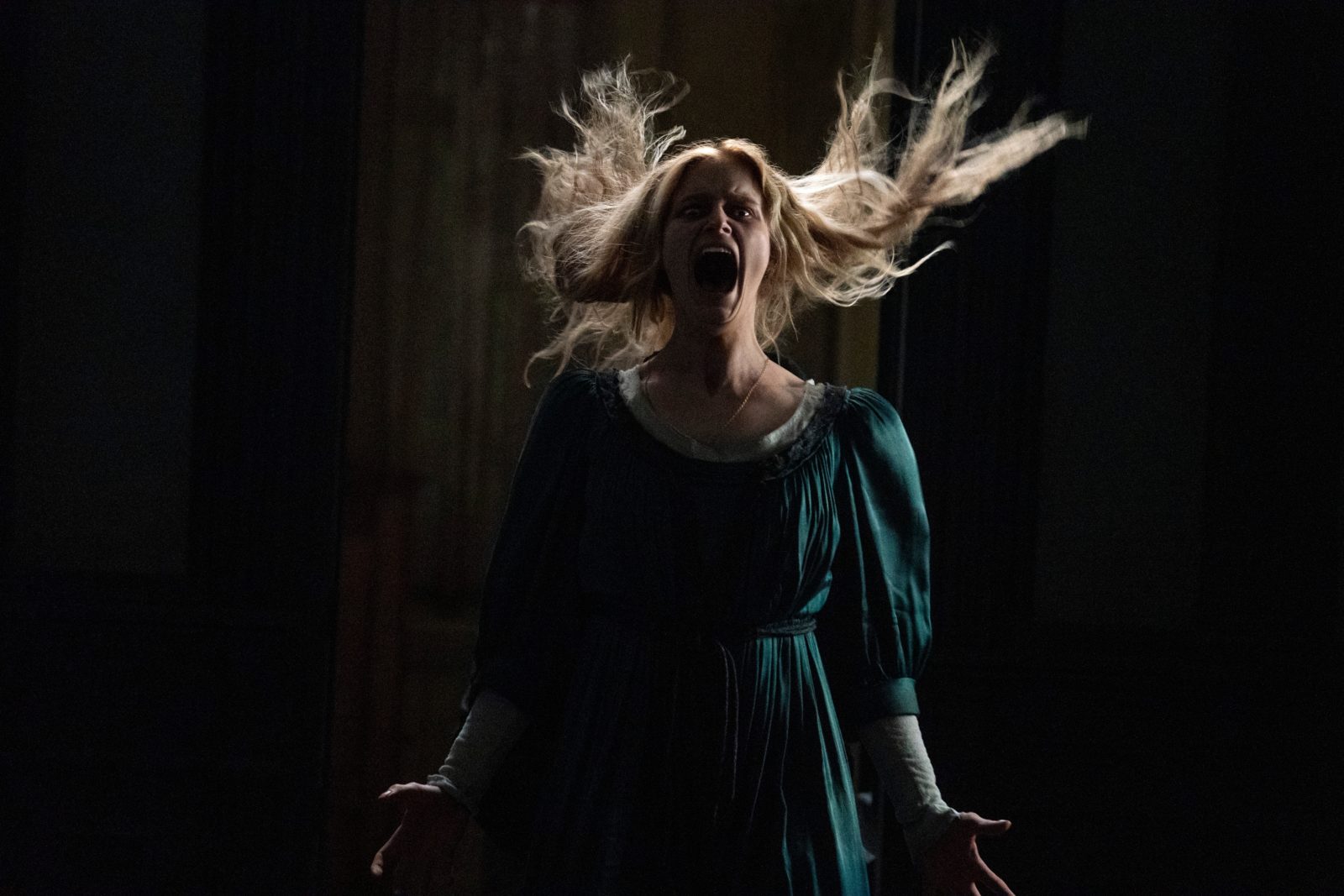 This month horror legend Guillermo del Toro (The Shape of Water) brings his curated anthology horror series to Netflix for a 4-night event with a different theme each night. Ghosts, demons, and Lovecraftian tales of witches — Guillermo del Toro’s Cabinet of Curiosities has got it all and then some.

The first episode is an original story from del Toro himself written for the screen by Regina Corrado (The Strain) and directed by Guillermo Navarro (Hannibal). It follows Nick (Tim Blake Nelson), a cynical bigot who buys storage units and sells what’s inside. His newest buy is filled with a bunch of antiques that are worth quite a bit. However, the previous owner kept a demonic secret deep within the unit. “Lot 36” is one of those stories that introduce you to a character you have every reason to dislike with no redeeming qualities, who you can’t wait to get his comeuppance, which Nick definitely gets.

Written and directed by Vincenzo Natali (In the Tall Grass), “Graveyard Rats,” based on Henry Kuttner’s short story of the same name, is about cemetery caretaker Masson (David Hewlett) and his grave-robbing side hustle. Like Nick (see above summary), he’s drowning in debt, and, with his life on the line, he seems to care even less than usual about the graves he’s stealing from. Masson’s already been dealing with unusually vicious rats but that doesn’t stop him from digging up the grave of a wealthy, recently deceased man, though. As expected, the rats prove to be an obstacle, but Masson finds himself crawling in the tightest of spaces trying to satisfy his greed. Hewlett does a good job portraying the fluctuating terror and determination of Masson as he goes on this claustrophobic, panic-inducing journey underground.

Director David Prior (The Empty Man) and Dark Knight Trilogy writer David S. Goyer bring Michael Shea’s short story to life (ha) in “The Autopsy.” Nate (Glynn Turman), a sheriff in a town with several missing people and a group of miners recently killed in an accident, brings in his medical examiner friend Carl (F. Murray Abraham) to perform the many autopsies. It begins with a scene in the sheriff’s office on a rainy night, with Turman and Abraham delivering captivating performances. This episode ended up going in an unexpected, pretty shocking direction with some serious body horror. (Do not eat while watching this.) It’s a visceral, supernatural mystery with a similar tone as “The Outside.”

This surreal horror comedy, written by Haley Z. Boston (Brand New Cherry Flavor) and directed by Ana Lily Amirpour (A Girl Walks Home Alone at Night), was based on comic book author Emily Carroll’s short story “Some Other Animal’s Meat.” Stacey (Kate Micucci) is a socially awkward bank teller surrounded by giggling ladies gossiping and gushing over each others’ good looks. Even though her husband Keith (Martin Starr) praises her various attributes, she still feels the societal pressure of being a woman. Dan Stevens plays a bizarre late-night infomercial salesman for Alo Glo lotion, which, like all products, promises impossible results. He lures Stacey in, and soon she’s also preaching about the vague power of retinol and peptides.

Director of Photography Colin Hoult (Chucky) puts the camera super up close, making the viewer just as anxious, insecure, and overwhelmed as Stacey. This world is popping with color and is definitely the brightest in the collection in terms of lighting. Daniele Luppi (Mona Lisa and the Blood Moon) creates a strange mix of enchanting yet suspenseful music that perfectly fits this grotesque fantasy world of amateur taxidermy and goopy, transformative lotion. It really gets into the horror of consumerism and the beauty industry, reminding me a lot of the twisted fairy tales in Roar.

“Pickman’s Model” is the first of a pair of H.P. Lovecraft stories, written by Lee Patterson (The Colony) and directed by Keith Thomas (The Vigil). Set in 1909, Boston artist Thurber (Ben Barnes) takes an interest in Richard Upton Pickman (Crispin Glover), a new painter, and his grisly artwork. Thurber has a strange reaction after seeing more of Pickman’s paintings, which all include a witch or other nightmarish images. Barnes and Glover are each perfectly cast in their roles and have excellent chemistry.

“Dreams in the Witch House”

Like the previous Lovecraftian episode, “Dreams in the Witch House” is about obsession and madness. Written by Mika Watkins (Black Mirror) and directed by Catherine Hardwicke (Thirteen; Twilight), this take on the story revolves around Walter (Rupert Grint) and his frantic search for his twin sister Epperly (Daphne Hoskins), who he watched die and get pulled into a forest realm when they were children. Fueled by grief, his search for a way to find her leads him to stay in the supposedly cursed Witch House. Rupert Grint has picked many interesting roles since his Potter days. It’s funny that he’s in this gothic tragedy about witches and rats.

“The Viewing” by writer-director Panos Cosmatos, along with co-writer Aaron Stewart-Ahn (Mandy), has to be the most sci-fi episode in the anthology. A group of professionals (Eric André, Charlyne Yi, Steve Agee, Michael Therriault), each highly regarded in their various occupations, attend a gathering hosted by the wealthy, reclusive collector Lionel Lassiter (Peter Weller). The whole event is cloaked in mystery, but everyone gets distracted by free drugs from Lassiter’s personal doctor (Sofia Boutella) and talks of existential dread. By the time the guests finally get to see the secret creature, everyone is nice and disoriented.

A good amount of the story takes place in a spherical, Legion-esque room that kind of looks like a spaceship. The combination of Michael Ragen’s (Dual) stylish cinematography and ominous synth music by Daniel Lopatin (Good Time) create this trippy, cinematic atmosphere that’s oddly sexy and kind of unsettling at the same time. The lighting is all reds, yellows, and oranges, seen through anamorphic flares that beautifully fit the 1979 setting.

The anthology ends as it began with another story by Guillermo del Toro, written and directed by Jennifer Kent (The Babadook). Set in the 1950s, ornithologists and married couple Nancy (Essie Davis) and Edgar Bradley (Andrew Lincoln) visit a gorgeous, serene island in Nova Scotia to study dunlins. A past tragedy has their marriage already on shaking ground, so when Nancy starts hearing, seeing, and feeling strange things in this obviously haunted house, her husband does the “man in a horror movie” thing and tells her she’s losing it.

Davis and Lincoln are both so nuanced in their portrayal of a married couple in crisis, who both have to document the flight pattern dunlins while dealing with their trauma. “The Murmuring” is a satisfying slow burn focused more on building tension than jump scares. It’s one of the most chilling ghost stories I’ve seen in a while.

Guillermo del Toro’s Cabinet of Curiosities is an immersive viewing experience crafted by some of the most inventive creators working in the horror genre. Though it’s a TV series, the production value is on par with a feature film, including delightfully scary creatures and an incredible cast of actors for each episode. Every story will leave you wanting more and thinking about it long after you finish watching.

The first two episodes of Guillermo del Toro’s Cabinet of Curiosities will drop on October 25, 2022, on Netflix, followed by two new episodes debuting each night through October 28.