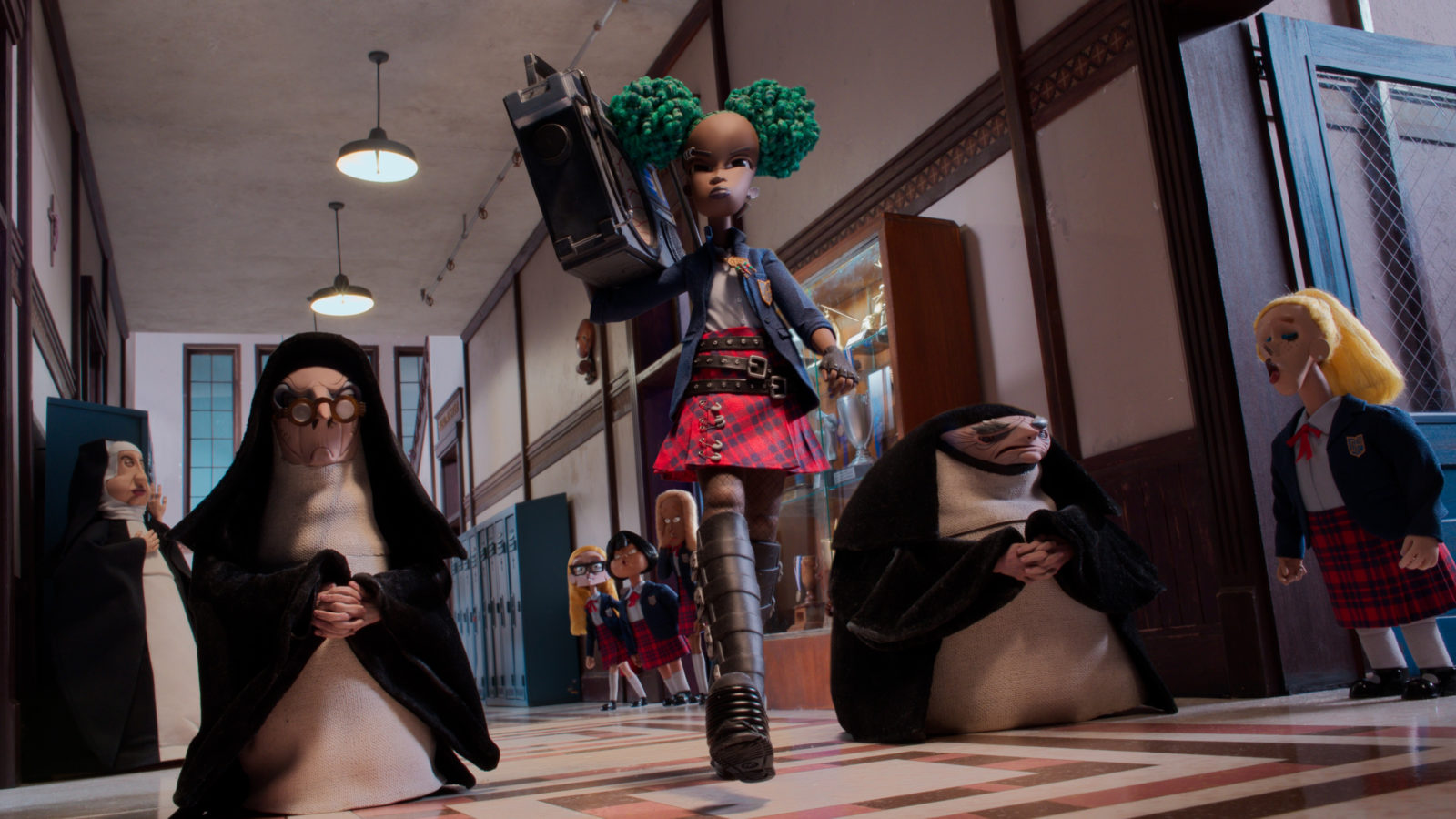 Legendary animator-writer-director Henry Selick (Coraline) makes his long-awaited return to the screen with a dark and edgy stop-motion feature just in time for Halloween.

Co-written by horror auteur Jordan Peele (Nope) and based on an unpublished book by Selick and Clay McLeod Chapman, Wendell & Wild is about second chances, self-discovery, and the afterlife and somehow manages to shine a light on the grim reality of the prison industrial complex and juvenile correctional system while remaining a fun, spooky story with plenty of bug guts.

Thirteen-year-old Kat Elliot (Lyric Ross) lost her parents in a tragic accident when she was eight. She harbors a lot of guilt that has hardened her against the world. She’s angry and has no interest in friends or any kind of affection. “I figured I’d just hate myself for the rest of my life,” she says.

But there are moments when her vulnerability shows. After years of bouncing around foster homes and a stint in juvie, she’s brought back to her hometown to attend Rust Bank Catholic School for Girls via a program called Break the Cycle. Rust Bank has seen better days, and it’s pretty much gone downhill since her parents died and their brewery burned down.

Throughout the film, Kat encounters RBC’s various oddball characters, like shifty headmaster Father Bests (James Hong) and the demon-obsessed janitor Manberg (Igal Naor). She also meets the fiercely protective Sister Helley (Angela Bassett), who knows more about the supernatural than one would expect. Kat’s ushered around the school by irritable, penguin-shaped nuns, but before she makes her way down the halls of RBC, she gives the school uniform a makeover to match her green-haired Afropunk style.

Meanwhile, the titular demon bros Wendell (Keegan-Michael Key) and Wild (Jordan Peele) are working for an Oogie Boogie-like villain named Buffalo Belzer (Ving Rhames) in the Underworld. Belzer runs the Scream Faire for the Souls of the Danged. The brothers have their own big amusement park dreams, fittingly called Dream Faire. But they need help from Kat, who happens to be their Hellmaiden. Yes, on top of everything else she’s dealing with, Kat discovers she can summon demons to the Land of the Living.

Selick, a big Key & Peele fan, reached out to the duo about this story of tricky hellions. He told Polygon, “It seemed like a Key & Peele skit, almost, that they could be these siblings who are demons but have very human weaknesses and desires.” That duality of humanity versus the otherworldly is a mainstay of the film, leading us to ask who the real bad guys are in this story. Are they the gleefully manipulative demons or the greedy humans?

The visual style of Wendell & Wild stands out from that of other stop-motion animations. It’ll definitely remind you of classics like The Nightmare Before Christmas, but the designs aren’t as smooth. Right away I noticed the seams between the characters’ faces. Selick said in an interview that they intentionally “left in bumps and imperfections.” I admit it’s sort of distracting. However, it gives the characters an oddly tangible look. There’s also a paper cutout aesthetic reminiscent of the eerie shadow puppetry in Candyman.

Each character is distinct, with some even resembling the voice actor portraying them. I knew Father Bests was Hong within two seconds of seeing the character’s face. With its multicultural cast of characters, you can tell that designs embrace Black and Brown features and hair texture, especially when it comes to Kat because we love a Black goth girl. I can’t wait to see all the amazing cosplay the film inspires. Plus, Bruno Coulais (Coraline) infuses his trademark ethereal choir music with Kat and her parents’ love of punk, featuring a few bangers from the likes of ​​Living Colour and TV on the Radio.

There’s a lot to love about Wendell & Wild, but it also has a lot going on in one film. Kat and her demons could’ve used more screen time with a little less focus on the corrupt prison storyline. Kat’s starting at a new school, finding out she has powers, facing her literal demons, raising the dead, and worrying about the fate of Rust Bank — all while carrying around unresolved trauma and a general dislike for everything and everyone — are a lot. Then there are multiple subplots involving RBC staff, students, and parents, not to mention what’s going on in the Underworld.

One of my favorite things about the film is just how subversive it is when it comes to kids’ movie tropes. For starters, the depressing town of Rust Bank might be the least likely kids’-movie setting ever. The wealthy girls at school are not bullies but rather super welcoming and optimistic, which Kat finds annoying. Adults aren’t stifling anyone’s childlike imagination or telling them to grow up (because they’re too focused on money). The cast and characters are incredibly diverse without their racial or sexual identity being the most talked-about aspect of their existence. RBC’s only trans student, Raúl (Sam Zelaya), has a supportive single mom and a school (a Catholic school at that) that recognizes his transition.

Wendell & Wild is a fun, twisted tale of tragedy, trauma, and second chances, beautifully wrapped in Halloween greens and mystic purples. Though the story feels overpacked at times, the balance of spooky fun and social commentary makes up for it. And with rich, diverse characters like Kat and Raúl, the film is a rare gem in the stop-motion animation genre. Selick never misses, and I hope this genius collaboration with Peele is the first of many.

Wendell & Wild had its world premiere at the 2022 Toronto International Film Festival. The film hits theaters October 21, 2022, and will stream October 28 on Netflix.