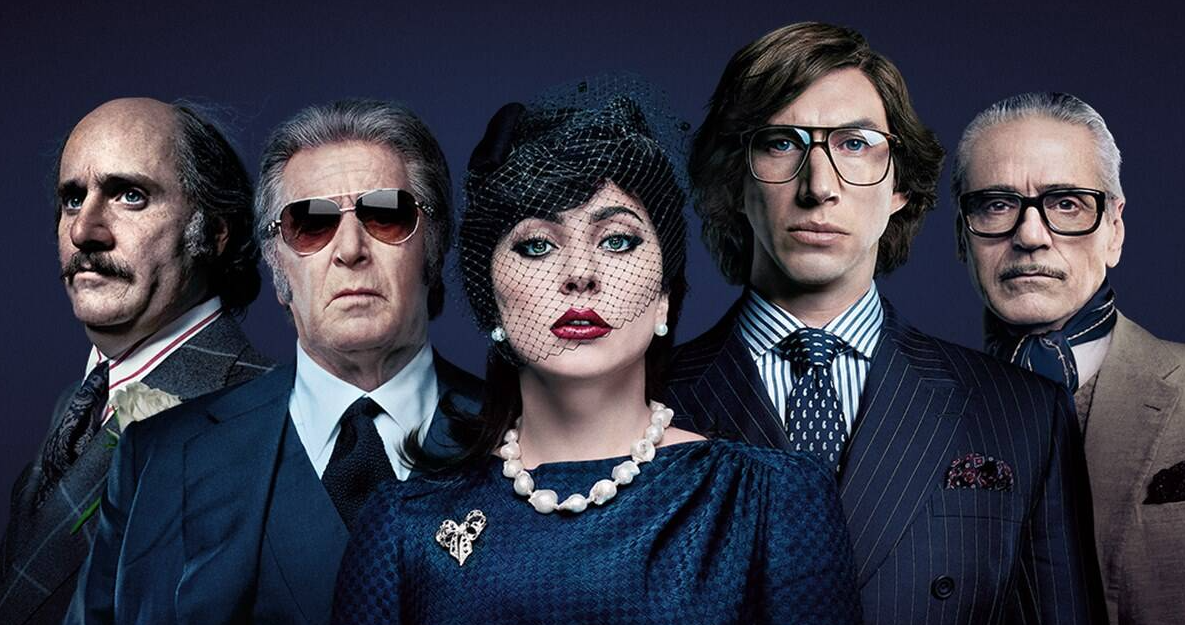 On March 27, 1995, Maurizio Gucci was murdered by a hitman hired by his ex-wife Patrizia Reggiani. Ridley Scott’s House of Gucci is a two hour and thirty-eight minute depiction of the rise and fall of Maurizio Gucci and Patrizia Reggiani’s relationship. If there was a big budget feature film of the 1980s original night time soap opera Dynasty with A-list actors, House of Gucci would be it. With its grandiose acting style, dialogue-driven action, and melodramatic music, this movie will be adored by Lady Gaga fans all over the globe. However, as a legitimate biographical film drama, House of Gucci falls short and is unintentional camp.

The film begins in 1978 with young Patrizia (Lady Gaga) an accountant at her father’s trucking company randomly meeting Maurizio Gucci (Adam Driver) at a party. It seems like love at first sight, for Patrizia. She engineers her way into a date with Maurizio after stalking him at the library. Their courtship is sweet, but when Maurizio introduces Patrizia to his father Rodolfo (Jeremy Irons), he disapproves of the relationship because he believes Patrizia is only after the financial and social status of the Gucci name.

Rodolfo threatens to disown Maurizio if he continues the relationship with Patrizia. Totally smitten, Maurizio chooses love and is disowned. Maurizio works for Patrizia’s father in the trucking business and the happy couple marry. In New York City, Maurizio’s uncle Aldo (Al Pacino) sees photos of the wedding in a magazine and high-tails it back to Italy to see his brother Rodolfo in order to get Maurizio back into the family business. Once Maurizio accepts his uncle’s offer, the story to his murder unfolds.

Screenwriters Becky Johnston and Roberto Bentivenga miss the mark entirely with this film. The film is inspired by the 2001 book House of Gucci : A True Story of Murder, Madness, Glamour and Greed by Sara Gay Forden but has very little substance. The script is as bad as a 1990s Lifetime made-for-TV movie. Every single character is a broadly written stereotype. Watching House of Gucci is like experiencing a really long Saturday Night Live sketch.

Ridley Scott does his film a huge disservice by allowing British and American actors to do really bad Italian accents throughout the film. The actors don’t sound Italian. As an audience member, I should have been engrossed in the story. Instead I kept thinking, “Why are they all talking like this?” Poor Adam Driver looks like he smelled something really bad during the entire movie. Jared Leto’s portrayal of Paolo Gucci was an over-the-top inauthentic impersonation.  Everyone was overacting. There was absolutely no subtlety anywhere in this entire film.

Lady Gaga has been on a press tour for months sharing her method acting process to playing Patrizia Reggiani. In her interview with British Vogue, Lady Gaga says that she stayed “in character” on and off set for the duration of the film using that accent and that she created the character from her imagination instead of meeting and interviewing Patrizia, who is still very much alive.

One of the many reasons Lady Gaga’s performance seems as if she’s working really hard is because she is working really hard to make the audience believe she’s not Lady Gaga. The best actors seem as if they aren’t acting; the best actors touch our hearts because they are telling the truth. But many of these scenes play like a bad method acting scene study class — lots of indicating, yelling, wild eyes, and big hand movements.

Patrizia Reggiani committed a crime, and she is a human being. When actors play people who do horrible things, it’s vital to find humanity in the person in order to honestly reflect the complexity of being human. If you’re playing someone who is still alive and you can meet with them to create your character, why spend months of your life “in character”? Will Smith doesn’t look anything like Richard Williams in the film King Richard, but his character study of the man is evident in his portrayal. Will Smith doesn’t disappear into Richard Williams, but the way the script was written and the way Smith is able to connect with the true essence of Richard Williams with humility and compassion, audiences are able to willingly suspend disbelief and enjoy the story.

The beauty of great storytelling allows the audience to put themselves in the place of the characters experienced on screen and to have a human connection to them. I had no human connection to any of the actors in House of Gucci. I was watching famous actors dressed up in pretty costumes in pretty places. If you are going to stay in character the whole time you’re shooting a film and audience members still don’t connect with your character, that means your artistry was about your ego not about telling the truth of the given circumstances in the present moment for the audience.

Don’t get me wrong; House of Gucci is entertaining. But it definitely did not have to be over two hours long. Lovers of camp and die-hard fans of Lady Gaga will adore this movie. Taking a trip back to the 1980s through costume and music is a blast. It seems like the actors had a good time overacting with one another while making this film. The locations are alluring and the costumes and sets are first rate.

Instead of this movie trying to be a serious film, with this style of acting it could have been a campy satire about glamor, intrigue, greed, and murder. House of Gucci is the perfect film to watch at a party as a drinking game, but the performances are far from being award-worthy. In fact, they’re just performances.

House of Gucci is in theaters now.