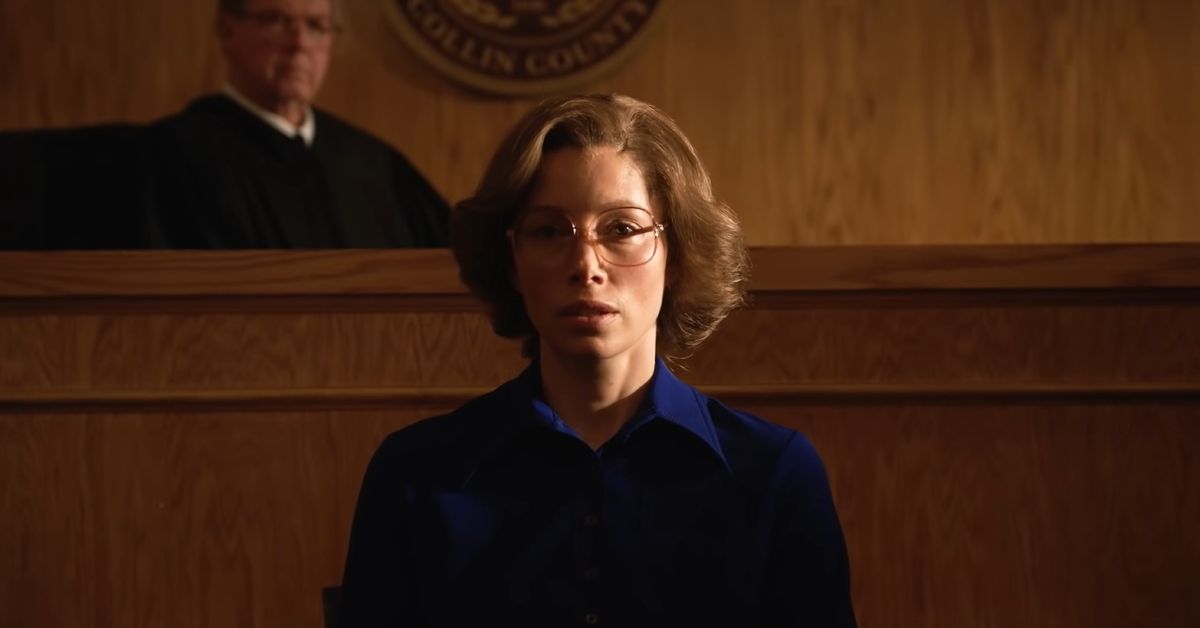 How does one go from Christian housewife to vicious ax murderer? Hulu’s latest five-part limited series Candy explores that very question. Showrunner/co-creator Robin Veith (The Expanse, The Act), and co-creator/writer Nick Antosca (Brand New Cherry Flavor, The Act) tell the true story of Candace “Candy” Montgomery, a woman who was accused of murdering her friend and neighbor Betty Gore in 1980. The murder weapon — an ax, of all things. It’s a fascinating crime with an unexpected victim and a surprising killer. The crime drama goes beyond the sensational headlines and examines the lives of the people involved.

Candy begins the morning of Friday, June 13, 1980, the day Betty Gore (Melanie Lynskey) is murdered. We get a good sense of her hectic life, going about her morning routine as a homemaker and caring for a perpetually crying baby while her husband Allan (Pablo Schreiber) heads off to work. Betty is understandably overwhelmed, and to be honest, I was, too.

The series then shifts to the titular protagonist (Jessica Biel) and her busy morning with three kids, two of her own and Betty’s daughter, which is all fun and laughs. Her loving husband Pat Montgomery (Timothy Simons), is attentive and playful with his kids and wife, much different than the heavy sighs of Allan and Betty’s exhausted tears.

The actors spoke to Entertainment Tonight about the show’s themes of isolation and expectations of women. “The women at that time and in that community, it was just a given that they would do all of that work,” Lynskey said. Biel added, “I think every mom and every dad in the entire world can relate to one day feeling, at least one day feeling, overwhelmed.”

Betty and Candy are very different women — Betty, an uptight, anxious former schoolteacher, and Candy, the lively social butterfly with a full schedule of errands, church activities, and family time. It’s clear that Betty isn’t a happy person and likely suffers from social anxiety. She’s insecure, especially about her marriage, and she’s antsy and lonely as a housewife. Melanie Lynskey brings a sympathetic aspect to Betty, who can come off abrasive at times. She’s not quite as strong-willed as Lynskey’s Yellowjackets character Sophie, but the actor imbues her with just as much vulnerability.

We don’t see Candy’s longing for something more until the second episode. Years of repressed feelings and striving to be the perfect wife, mother, and member of the community left Candy secretly unsatisfied. This desire for excitement led to her affair with Allan Gore. Star and executive producer Jessica Biel told EXTRA, “I feel the only way I can understand something like this is that there was a person locked up inside of that woman who so desperately was yelling for help and just didn’t know any way to ask for that.” Biel gives an incredible performance as Candy, making her a truly complex woman, who viewers can relate (except for the murder part).

The Gore’s and Montgomery’s live near each other and attend the Lucas Methodist Church, led by Jackie Ponder (Selena Anduze), a Black female pastor, which I admittedly did not expect. It was a pleasant surprise, to say the least. I don’t know if Wylie, Texas really had a Black woman as a pastor in the 1970s/80s, but I appreciate the series for making that choice. Anduze, known for her work in WandaVision and Doctor Sleep, has a supporting role but makes an impact in Candy’s life as her friend and pastor, as well as an audience that craves inclusion.

Candy’s production design is fantastic and sets the “not everything is as normal it seems” tone of the series. For people who weren’t alive in the 1970s/80s (like me), most, if not all, of their understanding of the eras is based on pop culture representations. Wylie isn’t the far-out, psychedelic 70s or totally tubular 80s. The aesthetic is small-town Texas. Ranch-style houses are carpeted and wood-paneled and covered in floral wallpaper. Primary colors are burnt orange, pea green, golden yellow, and every shade of brown.

The series features oddly whimsical music, the kind you’d hear at the beginning of an old Hollywood romance. It gives this small Texas town an idyllic atmosphere, playing with the old-fashioned notion of how lovely it is to be a wife, mother, and active member of the community, bringing happiness to others in the form of food, affection, and kindness.

Characters go about their mundane lives, mixing Kool-Aid, vacuuming, shuttling kids between activities, while sprinklers go off on the front lawn and their family eats mashed potatoes for dinner. But it’s the close-ups on these tasks, as well as the tight shots of the characters’ faces, that create an uneasiness. Something, or many things, is not okay.

Even though it’s based on true events, Candy manages to create a mystery. Nonlinear storytelling works perfectly for the series, showing us hints of what we (might) already know, then going back through the years and months leading up to Betty’s murder. Thanks to on-screen text denoting the date and time, it never gets messy or confusing.

Unlike some crime dramas, Candy doesn’t come off as a joke. Veith and Antosca aren’t making a series like the cartoonish The Thing About Pam. There’s genuine care for the characters, who are nuanced and not easily categorized as purely good or evil. It had me tense and fully engaged from the start, and delivered a cohesive narrative throughout its five-episode run. With so many shows, films, podcasts, and books, it can be a challenge to make one project stand out from the rest. Candy rose to the occasion as a thought-provoking character study, with brilliant actors, stunning visuals, and overall compelling storytelling.

Candy premieres its first episode on May 9 on Hulu, followed by one new episode daily until the finale on May 13.