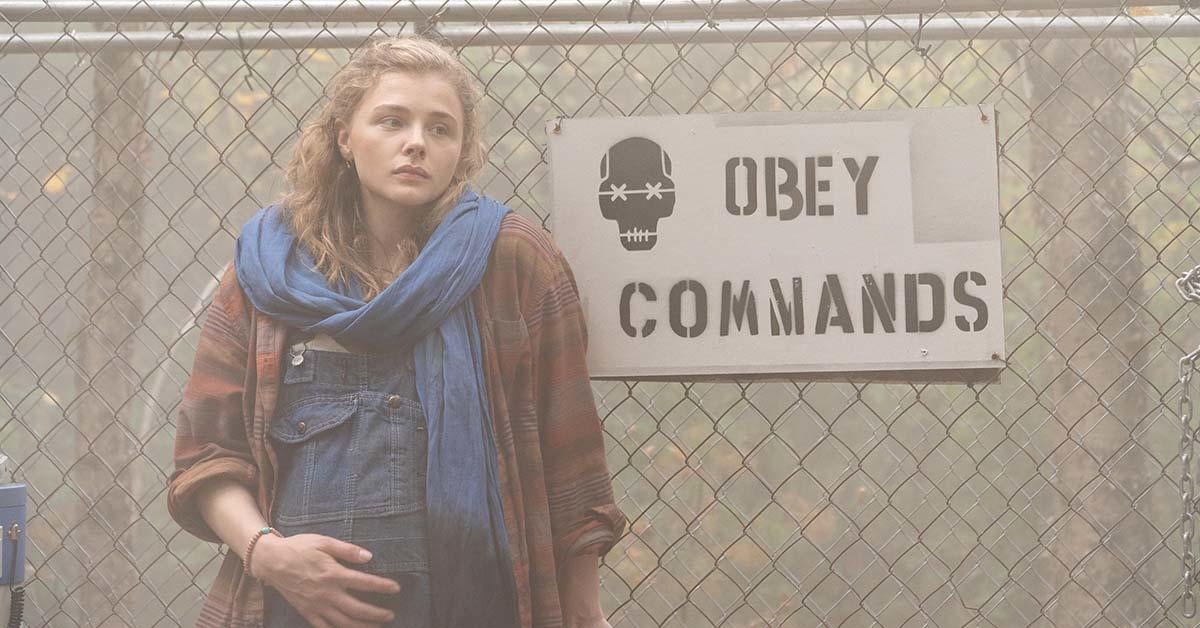 Mother/Android takes place in the near future during an android revolution. There’s a brief glimpse into life before the robopocalypse showing the androids as labor workers, particularly butlers for wealthy families. The fateful night of “the blitz,” 19-year-old Georgia (Chloë Grace Moretz) finds out that she’s pregnant. Her boyfriend Sam (Algee Smith) seems supportive, but it’s clear that the couple is already having issues in their relationship, with Georgia not even sure she wants to be with him.

Georgia and Sam’s lives change in an instant — both with the news of the pregnancy and the sudden outbreak of violence among the robots. Nine months later, the couple are in the forests of Boston fighting for survival. In hopes of finding a safe place to give birth, which could be any day now, the two venture into No Man’s Land — an area overrun by androids. Reminiscent of A Quiet Place, they have to be completely silent to avoid attracting attention to get through. (Thankfully, the film avoids the constant hushing between the characters that makes you roll your eyes and think, “Yeah, obviously.”)

Chloë Grace Moretz and Algee Smith deliver stellar performances as a young couple facing the harshest of conditions. Neither are strangers to highly emotional roles, but this film is unrelenting in its obstacles for the characters. Moretz in particular is very believable as a young pregnant mother, something not every actor can pull off. In an interview with BGN, Moretz said that she wore a 21-pound silicone belly while trekking the Boston mountains, which helped her embody the physicality and fatigue of someone with child.

Sam has a journey of his own as he’s trying to protect his girlfriend and unborn child. He can be reckless, and his well-intentioned actions sometimes have the opposite effect. However, Sam is determined to secure a better life for his family.

Mattson Tomlin drew from his personal life for this story, inspired by what little he knows about his birth parents, who were refugees during the Romanian Revolution in 1989. Georgia is a strong female character, but not in the Hollywood sense where she’s a tough-as-nails, emotionally distant gunslinger. During a heated exchange, Sam suggests Georgia is hormonal, a dangerous thing to say to a stressed-out pregnant woman. She counters, “I’m allowed to have emotions,” which is an understatement but something that needed to be said.

Tomlin told Vanity Fair, “There’s a lot of strength in being vulnerable too. And Chloë was such an amazing partner to me in making this movie, because we would have lots of conversations about what female strength is and when that vulnerability shows and when those insecurities show. To hurt, to feel pain, that’s not weakness. That’s just being human.”

Humanity is a significant theme in Mother/Android, as in other apocalyptic stories. The robots look exactly like humans but underneath their “flesh” is a metal endoskeleton exposed only when damaged. Androids are more like zombies in this film. They’re fast but not inhumanly so. The scariest aspects about them are those that are the most human-like.

While escaping an increasing number of androids in the wilderness, Georgia and Sam run into Arthur (Raúl Castillo). With the state of things, it’s hard to know who to trust. The man is helpful, but he’s ultimately a stranger in the woods. Castillo makes Arthur effectively unsettling and sympathetic, appearing as someone whose motivations are indiscernible.

The woods of Massachusetts make for a bleak yet beautiful setting. There’s very little sunlight, and the characters are often rain-soaked. However, some of the scenery is undeniably breathtaking, which is a small consolation in an otherwise hellish reality. Even when they’re indoors, the lighting is low, creating an intimate atmosphere.

In a time when every other film and TV series is set in a dystopian world, Mother/Android manages to stand out by not giving in to sci-fi genre tropes. The film’s approach to the apocalypse is understated and creates a chilling atmosphere that’s not at all outlandish. In fact, it’s eerily realistic. It’s one of the most thrilling, suspenseful, and heart-wrenching films I’ve seen all year.

The film stars Chloë Grace Moretz (Greta, Kick-Ass) as Georgia, Algee Smith (Judas and the Black Messiah, Euphoria) as Sam, and Raúl Castillo (We the Animals, Army of the Dead) as Arthur. It’s produced by Matt Reeves (The Batman), Adam Kassan, and Rafi Crohn for 6th & Idaho Productions, along with Miramax’s Bill Block and Andrew Golov, Tomlin, and Charles Miller.