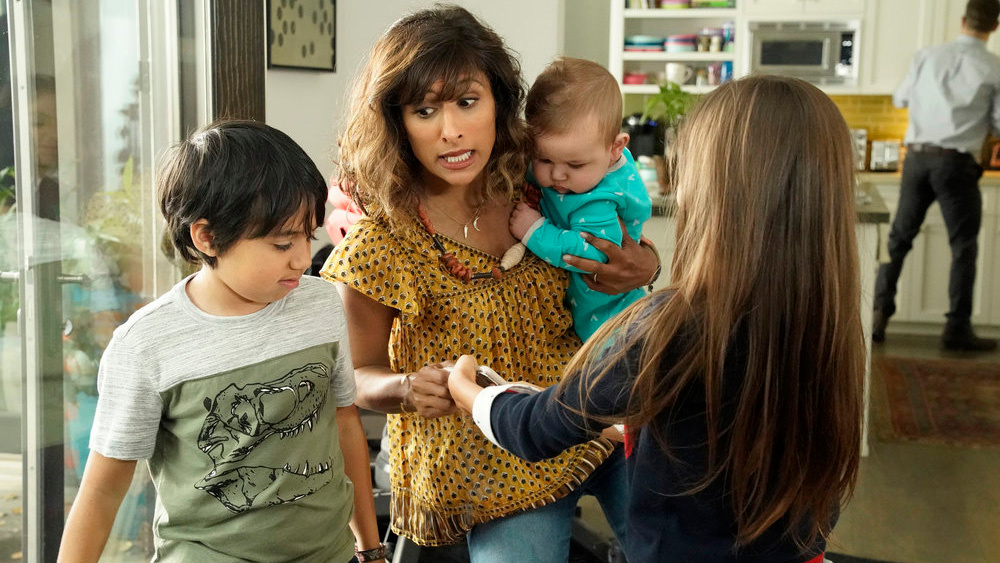 “Would you do me?” Emet Kamala-Sweetzer (Sarayu Blue) asks her much-younger, all-male team of video game developers after her dad groped her butt mistakenly thinking Emet was her mom. From there, the pilot’s discussion quickly devolves into an ageist muddle as Emet tries to boost her 40-something self-esteem through the 20-somethings who work for her. This is a strange (and unfunny) choice for an opening plot of Amy Poehler-produced sitcom I Feel Bad. And it sets the stage for increasingly dysfunctional scenarios as Emet tries to balance her family and career.

Based on the book I Feel Bad: All Day. Every Day. About Everything by Orli Auslander, this transcultural sitcom adaptation attempts to tackle a variety of social issues in the same vein as Fresh Off the Boat and Black-ish, but doesn’t fully succeed.

I Feel Bad is certainly aware of all the social justice vocabulary, sprinkling it in discussions without actually applying any of the noted principles. Just because you say the word feminism in each episode doesn’t automatically mean your show is feminist — and I Feel Bad’s feminism is mostly performative. Emet tries to be sex-positive while raising her kids, but even that message gets garbled in translation.

Worse, in Episode 5 “I’m Vain AF” Emet body shames, negs (a terrible kind of backhanded compliment used predominantly by “men’s rights activists”), and gaslights her husband David (Paul Adelstein) because he has supposedly put on a few pounds. Spoiler alert: He hasn’t. It was rather gruesome watching Emet’s children and parents all join in to “help” David lose weight through lies, manipulation, and deprivation. Adding insult to injury, Emet’s son Louis (Rahm Braslaw) is actually overweight. He internalizes some of Emet and her mom’s fatphobic behavior. Not cool.

Each episode offers a new problematic example of Emet’s self-admitted sociopathic behavior. From printing a fake honor roll sticker so she can have express pick-up privileges at her kids’ school to hiring a lookalike so she can pretend to be at her daughter’s dance rehearsals, Emet seems incapable of even a little honesty. And this aspect bothered me about the show a lot. These are not the mostly harmless white lies that parents need to tell their kids or partners (or parents) to ease something up. Emet’s are involved scenarios that always end in her family’s disappointed, and sometimes disgusted, faces. I’m not sure what’s funny about that.

I’ll admit that I’m not a huge fan of comedy, mainly because most of the time it seems to be based on ageism, fatphobia, homophobia, sexism, racism, and a whole host of other insulting behavior toward marginalized and vulnerable groups. While there are a few pure moments of comedy that rely on physicality or cultural reference, the low-brow is most often the kind of humor I Feel Bad relies on for its laughs.

Emet’s immigrant parents Maya and Sonny (played by iconic Desi actors Madhur Jaffrey and Brian George) are caricatures of Indian parents. Maya is verbally abusive and critical, taking open pleasure in her daughter’s screw ups. But at least she’s no longer physically abusive as she was when Emet was growing up. Sonny is a sweet pushover who has found ways to metabolize and shield himself from his wife’s constant harping. Every so often they have a kind and genuine moment, either with each other or their daughter, but as a whole it wasn’t enough to offset the negative qualities.

Emet’s husband David, on the other hand, has been given the role of (white) savior in the family dynamic. He is hands on with the kids even though he also works. He is seen holding their new baby Jake much more often than Emet. And it was he who sacrificed his music career so that Emet could pursue her art — a decision that has led to a great deal of professional and financial success for Emet’s game developer career. Now this is feminist AF.

In Episode 7 “I’m Not Sentimental,” David has doubts about their marriage and whether they are truly compatible. Emet’s pathological dishonesty plays a huge role in this. After lots more lies and more manipulation, one of Emet’s comments about their relationship is, “I need you to help pay the mortgage.” Like narcissists, it’s difficult if not impossible for sociopaths to feel emotions like love. Sociopaths see others as a means to get what they want. David realizes this but somehow the episode spins on its head and he decides not to leave her after all. This is one of many uncomfortable messages I Feel Bad sends, along with body shaming and normalizing abusive behavior and gaslighting.

After missing dance rehearsals and consistently letting down her daughter Lily (Lily Rose Silver), Lily has a big moment after taking care of herself. It’s supposed to be inspiring, that Lily saw her mom working so hard for what she wants and for Lily follows in her footsteps. But really the message is that 11-year-old Lily finally learned she cannot count on her mom to be there, so even though she is young her self-reliance has kicked into effect early. That’s not endearing. That’s heartbreaking.

I was also troubled by the fact that the showrunners have decided to lighten Sarayu Blue’s face. Every time she puts her hands to her mouth or eyes you can see her skin is several shades lighter, and the costumers even go so far as to cover up her upper arms most of the time to obscure her face-lightening. Colorism is a huge problem, not just in the South Asian community. Please stop this nonsense in future seasons.

To the show’s credit, it’s one of the few times I’ve seen South Asian characters on screen and didn’t relate with them except for some superficial qualities. Which is actually kind of cool as far as representation goes. Not every Desi thinks the same, and it’s great to have an opportunity to see ones with an experience totally different from mine. This is so rare, given general the lack of South Asian representation at all on American television. In many ways I Feel Bad blows the Desi model-minority stereotype right out of the water. And that is an important service.

I also appreciated that as the season went on, Emet’s family has more and more moments of unity rather than conflict. By the end of Episode 10 “My Children Don’t Know Their Culture” we see a beautiful blending of the Indian and Jewish sides of the family. I just wish it hadn’t begun as a “war between cultures” as if Indians and Jews are somehow incompatible. In fact, there is a long and fascinating history of Judaism in India that the episode doesn’t even mention. By Episode 13 “There’s Never Enough Time” I could finally start to see the potential in the group dynamic of this ensemble comedy. Still, this dynamic needed to gel much sooner.

However, the overwhelming message I received from I Feel Bad is that it isn’t possible to “have it all” as a career woman/wife/mother without sacrificing important things, like ethics and integrity. Emet always says she feels bad, but I don’t believe her. When something truly makes you feel badly you work to change it. Yet every episode circles around Emet’s newest lie. And she seems to enjoy the dishonesty, manipulating, and chaos-strewing that is her daily life. Maybe she gets an adrenaline rush from it, or maybe she’s even more sociopathic than she’s willing to admit.

In the end, I Feel Bad works better in small doses rather than a binge-watching session. Some of the less savory patterns of behavior are tempered with breathing room in between, making them less prominent. In so many ways I Feel Bad is still a win, in particular for South Asian representation. For everything else, it has a long way to go.