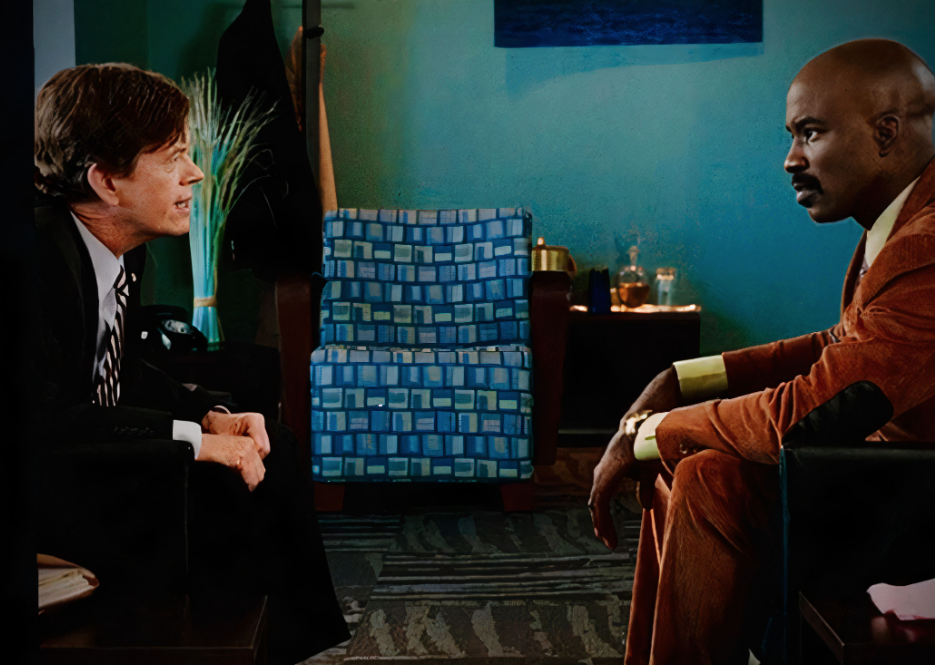 I wanted to review this film after watching the trailer. It depicted a Black businessman willing to play the game among white corporate men while white women mostly fawned over him. Would this be another film for white viewers to observe a Black historical figure palatable enough for them to learn from?

After watching the film and recognizing how much I wished the trailer focused on the film’s portrayal of Charlie Walker’s drive to support his family and how white people tend to be the ones who “make it about race,” the answer is yes, and no.

Narrated by his wife, Annette Walker (Safiya Fredericks), I’m Charlie Walker is based on the true story of Walker (Mike Colter). He is a Black trucker who leads the cleanup of an oil spill at Stinson Beach from the Standard Oil Spill at the Golden Gate Bridge in 1971. He navigates white male truckers who don’t take his leadership seriously because of his race, white hippie volunteers who fetishize and tokenize his leadership, and the white corporate oil company workers who try to frame him for the harm they caused.

I’m Charlie Walker does a great job of showing how the effects of climate change and other harms to the environment are used as tools of exploitation by corporations. How corporate institutions are often willing to throw Black people under the bus first for their own wrongdoings as well as exploit social justice workers for their willingness to help clean the oil off of animals on the shore.

In narration, Annette Walker states, “For a man like him, he was supposed to break the rules.” It made me happy to know that this wouldn’t be the type of film that promoted the need for Black people to be polite to get their needs met in or out of the workplace.

The film displays the deep power dynamics between white and Black people in leadership. For example, there is a scene in a bar not too long after Walker discussed his effectiveness in cleaning up the coastline in record time, where the corporate workers (Dylan Baker and Mark Ford) blatantly ask him to get them drinks from the bar as a way to show their superiority over women who come to flirt with them at their table (Monica Barbaro and Anna Moore).

There are plenty of scenes in which Walker wants to believe that white people don’t see color but instead see the work ethic of an individual or the need to protect their surroundings. He is a character who reflects many hardworking Black people who have perspectives like these and have hope in a country that continues to fail them and not prioritize them. It is intriguing to see Walker’s optimism, which seemed to last most of the movie, become challenged in the bar scene.

ALSO READ
Review: Watching How Much We Watch in HBO’s ‘The Princess’

Unfortunately, the film doesn’t provide intrigue until halfway through. The first half is filled with either cheesy or on-the-nose dialogue. The character other than Walker with the most nuance is a corporate guy who ends up defending and liking Walker, Dan Wallace (Steven Wiig). The movie’s dialogue is redolent of the type of movie you show to students at predominantly white schools or in introductory cultural competency courses. Of course, there are films and television shows that are actually well done in providing that necessary education, whether made specifically for that audience or not. I’m just not sure that this film hit the mark as hard as it could have.

The decision to overemphasize certain shots, such as when Walker exchanges various documents with any white men in charge, is quite jarring as well.

The actors have done an incredible job, even amidst awkward direction given to the white male actors whose characters were supposed to give Walker the hardest time (like Travis Johns, who played Red McNulty). Also, I’m sure the director, Patrick Gilles, and producer Bill O’Keefe were truly inspired by Charlie Walker’s story, even though their impact on the film upon viewing did not match the intention of empathy from the filmmaking process. Centering stories of historical Black entrepreneurship or success stories of Black capitalism is not the answer to solving climate change.

There were only two Black producers for the film, one of them being Walker himself. Sure, one could say that because of that, he may have wanted this film to be an educational one about his experience. I don’t think it’s fair to say that Black people are the only ones who ought to tell Black stories. That’s reductive and not true. I do think it’s fair to ask this: If more Black people had been involved in the production, would there have been more collaborative storytelling that could have presented the authenticity of Walker’s experience without reliance on white perspectives to share it?