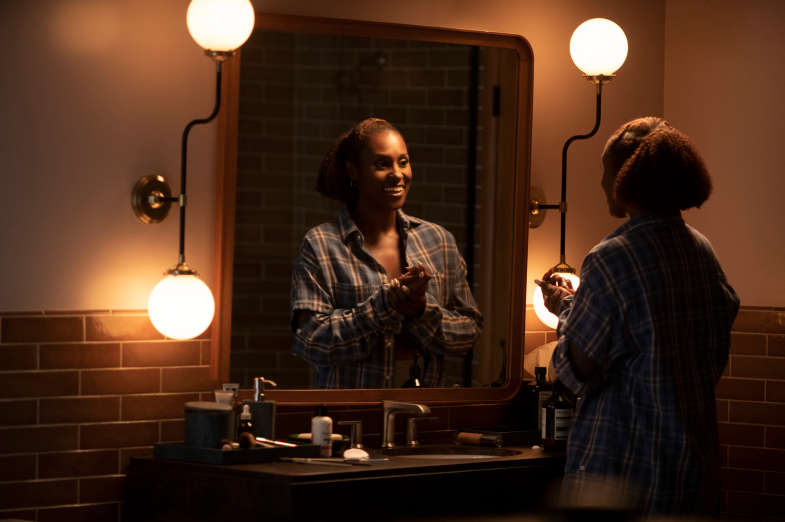 Written and created by Issa Rae (The Photograph) and Larry Wilmore (The Nightly Show with Larry Wilmore), Insecure returns for its fifth and final season. The hit HBO show gave us a cast of characters with messy lives and relatable personalities. There’s a lot of pressure for this season to deliver, wrapping up everyone’s storyline and leaving fans satisfied. More importantly, Issa Rae is ending her first network television show on her terms.

In the Season 4 finale, Molly, Issa, and Kelli help Derek track down Tiffany, who hasn’t been home or answering her phone for a day. After a series of false leads, they find her at a hotel. She’s safe but clearly has postpartum depression. Derek embraces Tiffany and the couple cries together, while Molly, Issa, and Kelli cry, too.

Molly and Andrew break up, partly due to their conflicting schedules, but also because of Molly being inconsiderate of Andrew’s feelings and her habit of being selfish. Issa and Lawrence are back together, but he accepts a job in San Francisco. They want to make it work, but he drops a bombshell — his ex-girlfriend (and Issa’s ex-friend) Condola is pregnant with his child. The episode ends with Issa and Molly meeting up at their favorite Ethiopian spot. Molly and Issa’s friendship shouldn’t be based on trauma bonding. That’s the definition of unhealthy.

The Season 5 premiere episode, titled “Reunited, Okay?!” follows Issa, Molly, Kelli, Tiffany, and Derek as they attend their 10-year reunion at Stanford University. Molly and Issa are still in a weird place, but they’re each working on it in their own ways. Issa is a guest speaker on a panel for alumni and entrepreneurship. She goes into this event confident but comes out feeling like she hasn’t accomplished enough. Issa’s cultural curating business is still in its early stages, but she’s finding her voice and her brand, with the help of her assistant Sequoia, who is a regular this season.

There’s a certain pressure that comes with turning 30, and Issa is feeling it. Though she still doubts herself, she has her friends there to let her know how far she’s come. Returning to Stanford brings up some comparisons between Issa’s mirror self, a.k.a. throwback Issa, and present-day Issa. If you imagine yourself 10 years ago, would that version of yourself be happy with where you are now? A lot happens in a decade — interests change, relationships begin and end, and you grow into your true self.

Issa told People that this season revolves around the question: Are we going to be okay? The episode titles all end in “okay?” as well. It’s fitting that the first episode takes them back to their alma mater, where they reminisce about their heavy partying days, as well as how hopeful they were about their futures.

Something that most characters have worked on is loving themselves outside of relationships. However, every time one of them is single, it’s not long before a new (or old) love interest comes into the picture. They’ve grown in their own ways but still fall into old habits. Honestly, I’d love for the series to end with more of them staying single and strengthening their relationships with their inner selves. They begin that journey but don’t seem to see it through, and they end up getting distracted by dating the wrong people.

Yes, it really is the end, and that’s okay. Issa told Extra, “From the beginning, this show has been about a girl trying to figure out who she is and where she’s going, and this season is about answering that question for her.” Fans are obviously sad to see the show come to a close.

The final season of Insecure feels like it might focus more on friendships rather than romantic relationships, which I think is best for all of the characters. The central love story is Molly and Issa. Whether they’re able to repair their friendship (and make it a healthy one), remains to be seen. The writers know what they’re doing, though. With her talent, dedication, and brilliant mind, Issa Rae will end this series her way, and I’m down with that.