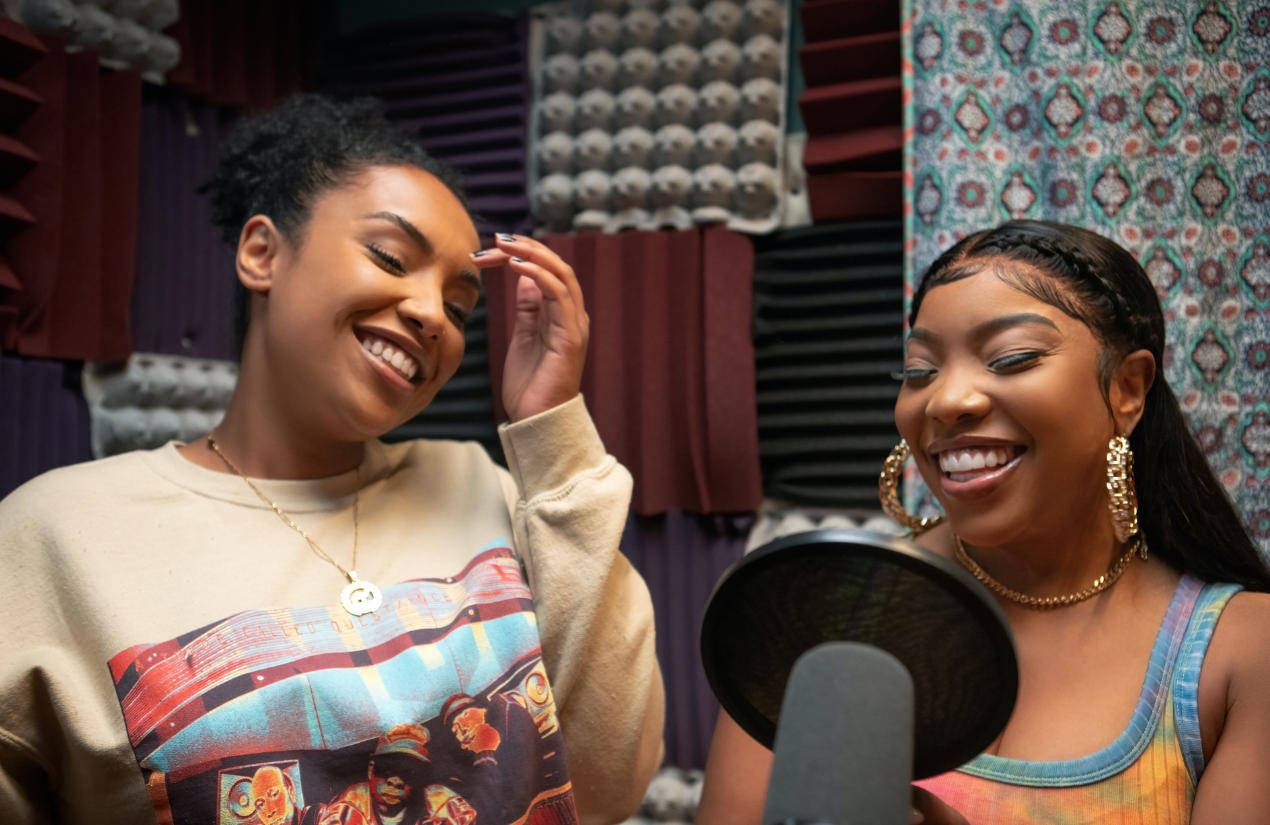 This time around, fans are introduced to two Miami-based rappers, Shawna (Aida Osman) and Mia (KaMillion), who join forces years after their high school days to form a rap group. Together, they begin slowly climbing the ladder to fame. As expected, their quest to fulfill their dreams isn’t an easy one.

The series was produced by Hoorae Productions and 3 Arts Entertainment with Syreeta Singleton, now stepping into her own as the series’ showrunner after writing for Insecure. Additionally, the show draws reference and authenticity from real-life rappers. This includes the show’s co-lead KaMillion, Cardi B, Megan Thee Stallion, Nicki Minaj, City Girls, and more.

The Good: Rap Sh!t Spits Its Own Distinct Rhymes

Rap Sh!it comedically immerses and juxtaposes Miami tourist culture with local culture. This makes it clear that similar to Insecure, the plot is driven by location. From the first episode, the creators convey plans to be very Miami-centric. They introduce audiences to both Miami, Florida, and the specific group of people they have living there.

While, in many ways the show, replicates the same formula as others, it brings a refreshing perspective through its depiction of social media. Although social media plays a vital role in American life, many series fail to reflect how much leverage an online presence has on social and professional success. This series makes viewers more mindful of their own behaviors (literally with selfies and IG lives). Audiences have a realization that most people use social media like currency — and that’s just what it is on Rap Sh!t.

Social media takes on a persona of its own, as it simultaneously conveys information, fuels conflict, bolsters careers, and cancels people as episodes go by. It plays with surveillance and what it means to constantly live in front of and behind a camera. Even intimate moments are observed by strangers and inundated with comments and likes. In that light, each episode presents a serious phenomenon amid lighthearted booty twerks and dropping beats.

The series also addresses the issues of selling out, cultural appropriation, and talent that goes overlooked. In the rap industry especially, Black women have always had the odds against them–even after making countless contributions to rap culture.

While it’s about the music industry, Shawna and Mia tell a bigger story about how Black women are discounted and devalued for their work. Instead of competing against each other, the Black women rappers in Rap Sh!t are (for the most part) a team. Many of Shawna’s raps are about the structural issues of racism, colonialism, student debt, and misogyny–which are ignored versus music about sex and partying. By contrast, Mia’s raps are more geared toward money, parties, sex, and fast cars. Together, the show pushes the message that rap should combine politics and party to inspire listeners. Thus, making this team the dream.

Finally, there are hilarious “Karen” moments and other pokes at entitled white women that hop on Black trends for the social media likes (but don’t actually value Black people). The show reflects the reality of Black women trying to break into a superficial industry without compromising who they are.

The Bad: The Characters Don’t Extend Further Than Their Social Media

Overall, there aren’t standout performances. However, Osman does create a compelling character that carries to the story. Shawna is the most developed character with clearly understood motives and struggles. Mia, on the other hand, works wonders comically — but presents a character that’s difficult to take seriously. While she endures considerable struggles, there’s an almost unbelievable (and aggravating) ignorance about her, which makes her friendship with Shawna perplexing.

While pairing characters with vastly different temperaments and moral codes may be engaging in some projects, in Rap Sh!t it’s awkward. The same goes for Osman and her longtime boyfriend Cliff Lewis (Devon Terrell). They both seem like they went on a few dates rather than being in a committed relationship for several years. Whether on purpose or due to lack of chemistry, the two don’t make any sense. They beg the question of why the relationship is introduced in the series at all. What it does (if anything) to build the story.

Following a similar path, the minor characters melt into the show without making a strong impact. They help move the plot forward, and not much more. While the social media aspect is engaging, it seems to often act in place of character building. The characters are reduced to their social media–and it feels like a lot of noise without substance.

The number of characters is also disorienting. So many names and faces are introduced within the first few episodes alone that it’s difficult to connect or relate with anyone beyond Mia and Shawna.

Rap Sh!t is no Insecure. It has charm — but the two don’t and shouldn’t be compared. While there’s nothing like Issa Dee mirror rapping to hype herself up (or not), this is a different rap vibe altogether. Few shows dive into storytelling through social media so boldly while making people evaluate their own lifestyles at the same time. For that, the show is notable. However, it lacks the substance-infused comedy Rae is known for bringing to her projects.

So far, the story of Shawna and Mia draws intrigue without adoration, making for an overall mildly fun show that (if given another season) could become the newest top-charting hit.