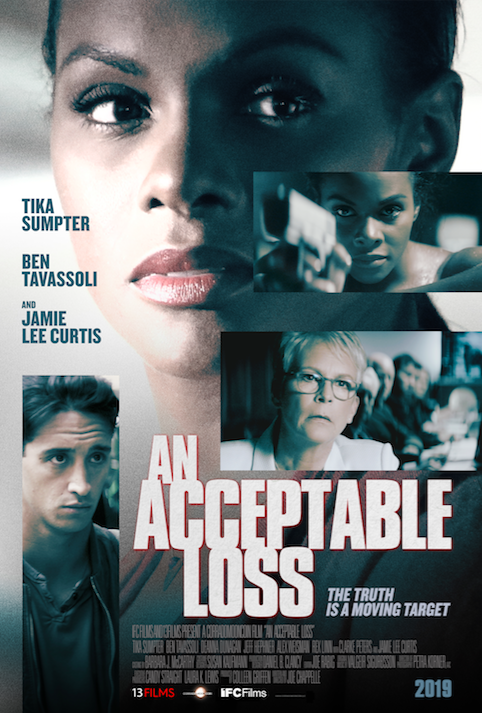 Actors Jamie Lee Curtis and Tika Sumpter have had an exceptional year in film last year. Jamie Lee Curtis starred in one of the highest grossing box office horror films in 2018 with Halloween and Tika Sumpter starred in one of the Tyler Perry’s non-Madea movies Nobody’s Fool along with the perpetually hilarious Tiffany Haddish.  She also starred in Robert Redford’s last film The Old Man and the Gun. These two talents work together in the IFC movie An Acceptable Loss, which made its debut last year at the Chicago Film Festival and Virginia Film Festival.

The political thriller An Acceptable Loss, tells the story of government official Libby Lamm (Tika Sumpter) — who is at the center of controversy when she takes on a teaching position at a local university in Chicago. Libby has a questionable past and it is that history that has led to a series of protests and vitriol directed at her. Libby harbors a dark secret, that she’s carried with her since her tenure as a top national security advisor under Vice President Rachel Burke (Jamie Lee Curtis).

Libby and the administration under the coercion of Burke — executed a military action targeted at a few terrorists which led to the deaths of thousands of innocent men, women, and children.  Libby is battling with this deadly secret and she decides as an act of reckoning, to write a manuscript sharing the details of the decision and what really happened. She’s willing to risk everything, including treason and her own life, in order to tell the truth.

Libby is paranoid and keeps a gun with her at all times, even while she’s bathing.  It’s clear she’s concerned about the threats on her life, not only from the public but she’s concerned about the intelligence agency keeping tabs on her.  As it turns out, there is someone keeping tabs on her, but not whom you would expect. A young graduate student from her class named Martin (Ben Tavassoli) is following her around campus and her private residence. He keeps images of her on his computer and has high-tech surveillance (as if he’s someone who’s actually worked for the bureau) with him as he scrutinizes her every move.

The story format begins with Libby and Rachel discussing the aftermath of their choice and the production of the Burke Doctrine which obviously has some facts missing from its record. As each scene progresses, we slowly learn Libby’s motives for leaving her position and her inevitably creating a memoir of the events. Due to the film’s pacing, which is not only slow, but it also doesn’t create enough momentum to keep us engaged in the plot — once we get clarity of what is happening here all interest is lost.

Written and directed by Joe Chappelle, who is notably known as a TV director in shows like Chicago Fire, Fringe and CSI: Miami — it’s understandable why the movie felt more like a binge watch of a new series in developing in its first season than an actual feature-length film. Chappelle has stated that An Acceptable Loss is inspired by two documentaries from Errol Morris: The Fog of War and The Unknown Known. In the latter, Donald Rumsfeld and George W. Bush were the inspiration of the characters of Libby and Rachel.

Rachel is rather defiant and is void of any sympathy when making a decision to kill terrorists at the expense of thousands of lives. Rachel is depicted as being aggressive and although the story doesn’t explicitly show why — it becomes evident when Rachel becomes President four years later, that she’ll stop at nothing to get what she wants.

As for Martin, the young student stalking her, once we learn his motives for doing so — his story arc takes on an odd twist that seems less plausible based on what we know about his character. In other words, his character wasn’t developed enough to explain his actions and it appears nonsensical more than anything else.  Not to mention the fact that this guy knows way more about espionage than most kids his age do.

The ending felt like the kind of ending you come up with when you’ve seen a bunch of political crime thrillers over the years, and assume this is how you should always wrap up a cover-up tale.

While the performances of Sumpter and Lee Curtis are stellar, it’s not enough to fix the plot holes and lackluster momentum of the story. Sumpter is an actor who has a knack for dramatic roles as evidenced by her role on the OWN TV series The Haves and the Have Nots. She deserves to have another shot as a lead in a political thriller with a more engaging story.

To round out the ensemble to the stellar cast are Jeff Hephner, Clarke Peters, Deanna Dunagan, and Rex Linn.

An Acceptable Loss has a limited theatrical release on January 18th and will be available On Demand.