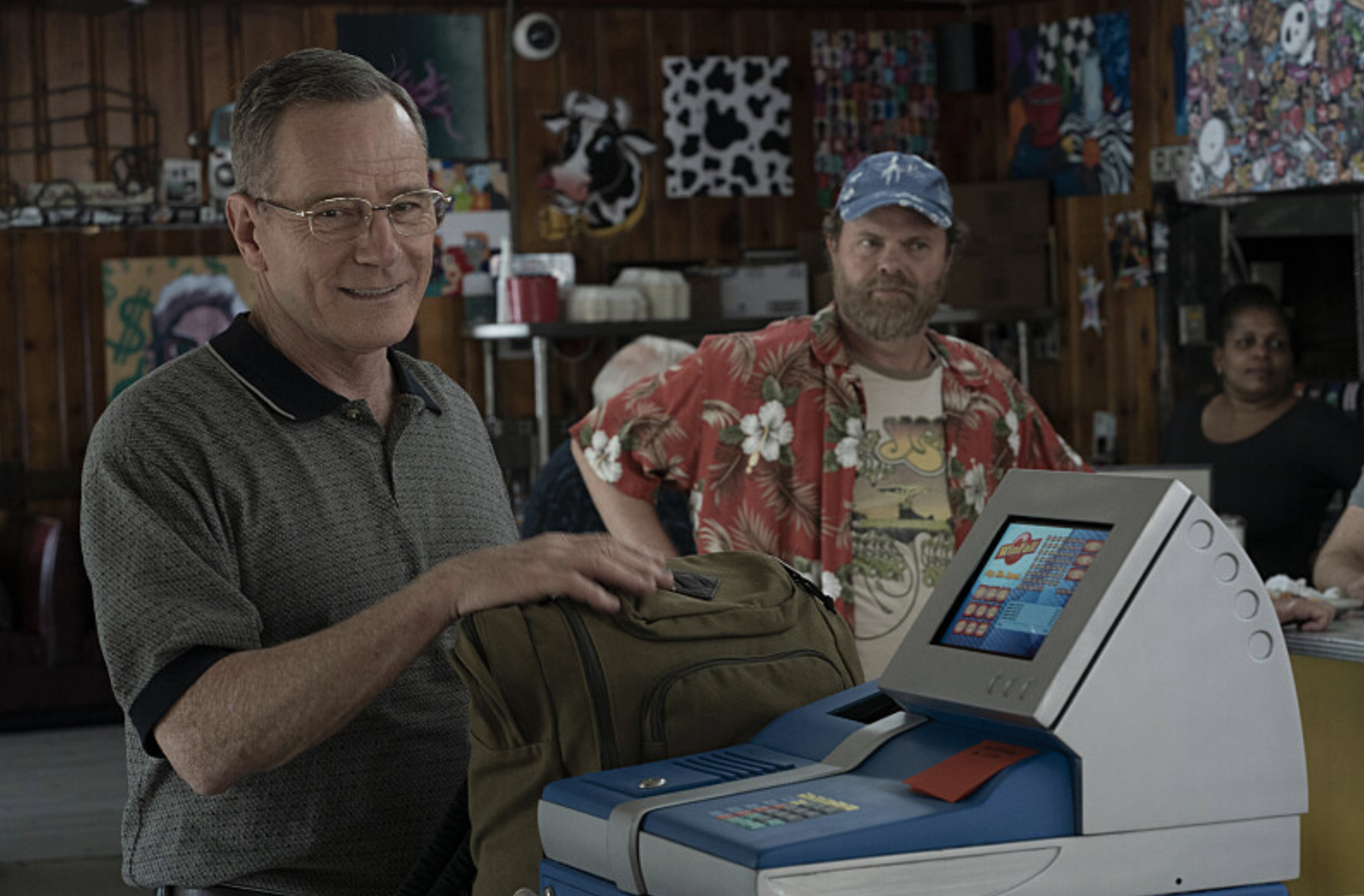 I’m going to try to give this film a good review, because to not do so would be Mean. And this movie is very Nice.

Its protagonists are Nice. Their motivations are Nice. The subject matter is Nice. And even the bad guy’s biggest flaw is that he’s young, rich, and Mean.

It’s not that this movie is bad. It’s that nothing happens in it for me to classify as anything other than Just Fine. And that would probably be okay with the small-town characters it’s about.

The movie, Jerry & Marge Go Large, is based on the true story of Gerald “Jerry” Selbee and his wife Marge who won millions of dollars playing a loophole in various state lotteries. In the film, Jerry (Bryan Cranston) is a recent retiree who doesn’t know what to do with himself. He’s only ever known work and numbers, and this has gotten in the way of him learning how to connect with his family.

One day, Jerry realizes that a new lottery game Winfall has the potential to make him and his wife a lot of money based on the odds. I won’t go into the math behind it because, frankly, I didn’t understand it, but what’s important to know is that he has a surefire way to double his money every time he bets.

From here, Jerry and Marge (Annette Benning) recruit more and more people from their small Michigan town to bet money, realizing there is more money to be made that way and, as the film wants us to see, more ways to help those around them. Because the lottery board doesn’t seem to mind (they’re still making a profit), the film’s antagonist comes in the form of Harvard snob Tyler Langford (Uly Schlesinger), someone who also realizes the flaw in the system but wants to push Marge and Jerry out so he and his friends can win a bigger share of the lottery money. He claims he’ll stop at nothing to win, even if it means ruining Marge, Jerry, and their friends and family’s lives.

If that last part sounds interesting, don’t get excited: this isn’t that type of movie.

Jerry calls Tyler on his bluff, and, by the end, even Tyler’s Harvard friends are wondering whether it’s actually okay to threaten two old Midwesterners with financial ruin.

It’s no spoiler to say Jerry & Marge Go Large has a happy ending. Like I said, the film is very Nice. Lessons are learned, burned (well, slightly charred) bridges are mended, and everyone comes away a better person. “It’s not about math,” Jerry’s son says. “It’s about being human.”

If that line doesn’t have you running for the hills, this is the movie for you. Between the acoustic guitar score, the precocious granddaughter character that calls Jerry “Pop-Pop,” and narration by Rainn Wilson about how great Jerry and Marge were, this movie wears its occasionally saccharine heart on its sleeve. And it wants you to know it’s okay with that.

A tertiary plot involves Boston Globe reporter Maya Jordan (Tracie Thoms) figuring out what’s going on with the consistent wins by Jerry and the Harvard group. At one point, she realizes that the Selbees, more than anything, are using their winning strategy to revitalize their town. “Well this can’t be a puff piece,” her Mean Editor at the Globe says. “I need a headline.” In a way, Jerry & Marge Go Large seems to argue for the usefulness of the puff piece.

In another movie, Jerry’s workaholic nature and obsession with the numbers might have been treated in a darker or melodramatic way. Here, any problems caused over the years by his distant personality are solved with some wacky-but-legal lottery shenanigans and tossing the ol’ pigskin with his adult son. Often, with a swelling, finger-plucked score behind him, Jerry realizes he needs to be more human, not more calculating; that’s what life is about. If this movie tackles issues like fear of retirement, getting to know one’s partner again after years of marriage, and the reasons why a small Michigan town might be struggling financially in the first place, it does so tangentially.

The issues aren’t the point; the fun solution is.

And it is fun to watch them win. It’s interesting to see how Jerry and Tyler may or may not go head to head. When it gets less interesting is when you realize the plot twists and turns are happening exactly where you’d expect them to. Here’s the part where Tyler gets him to quit. Here’s the part where he tells the town it’s over. Here’s the part where the dutiful son reminds his dad that he should keep up the fight — look at all the good he’s done around here! Jerry & Marge Go Large is an almost perfect example of how to write a ninety minute, three-act screenplay by the book. It won’t teach you how to write an exciting story, mind you, but one that is strangely comforting for its familiarity and easy messages.

Overall, this movie is Fine. It’s the kind of film that seems tailor-made to have the word “heartwarming” quoted as a single-word review on its theatrical release poster. You’ll laugh, and, hey, this movie is so Nice, you won’t even cry. Instead you’ll tut-tut your finger at that Harvard-educated city boy’s antics and cheer when he loses in the end. You’ll say “Awww” at Jerry using his granddaughter’s drawing as a company logo. You’ll rub your partner’s knuckles lovingly as Annette Benning and Bryan Cranston do an admittedly wonderful job at portraying an older couple reigniting the sparks of their passion.

It’s puff with nothing new to say, but the film does a great job of saying sometimes that’s okay.

Jerry & Marge Go Large will be available to stream Friday, June 17 on Paramount+.