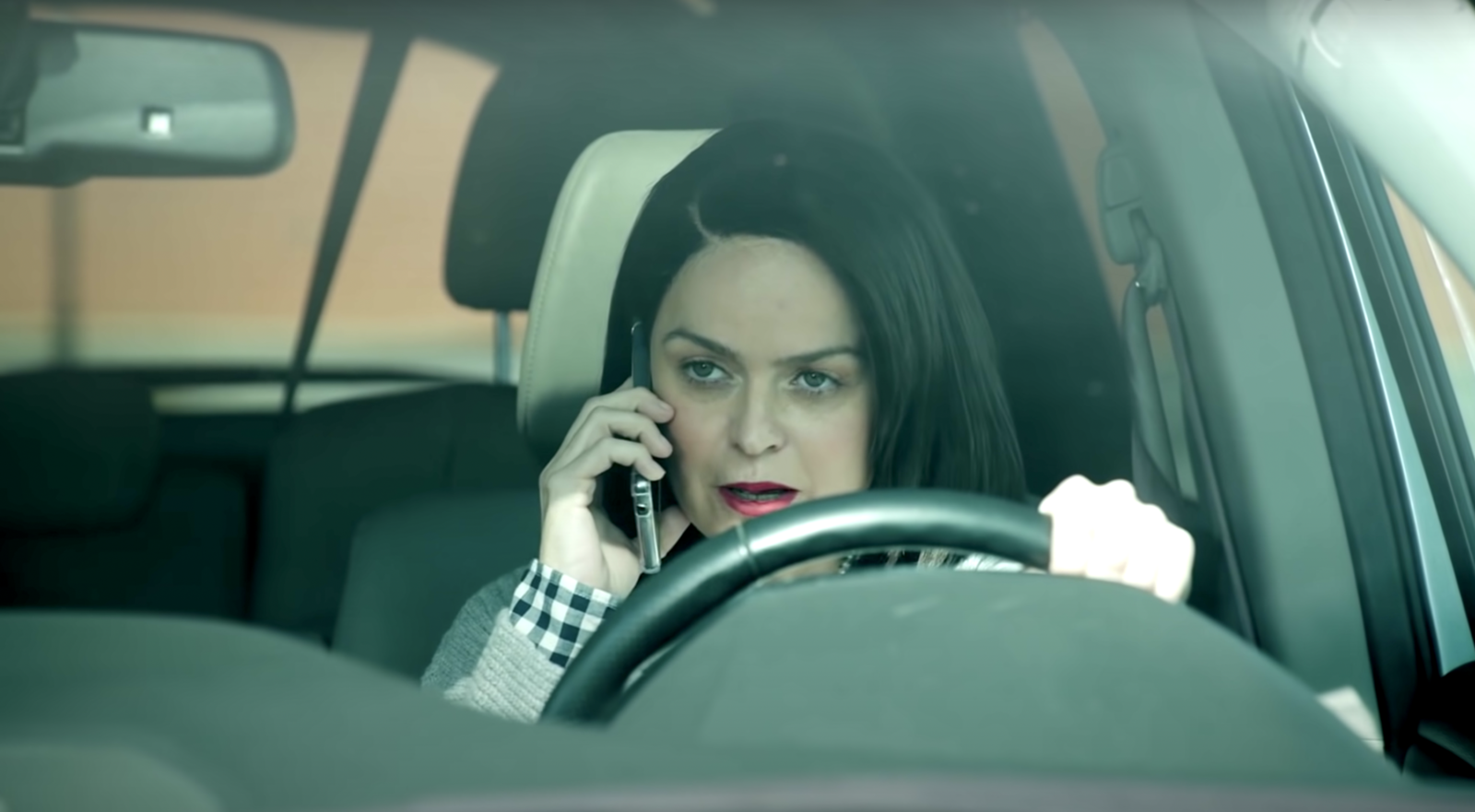 Often, we look to movies to reflect what’s happening in the world today. Writer-director Coke Daniels’s (Highway) latest film Karen tries to do that but instead creates a cartoonish portrayal of what a “Karen” stands for in our current culture. Produced by Aloe Entertainment and Flixville USA, the suspense thriller stars Taryn Manning (Orange is the New Black) as the titular Karen, Cory Hardrict (The Chi) as Malik, and Jasmine Burke (Saints & Sinners) as Imani.

Karen opens with a white woman (who we will later know as Karen Drexler) washing a Black Lives Matter chalk drawing off a street. When Malik and Imani, a young Black couple, move into her suburban neighborhood, stay-at-home mom Karen makes it her mission to drive them out. Their interactions begin with microaggressions and quickly escalate to unmistakable racism.

It wouldn’t be a movie about “Karens” without the recognizable “Karen” on her phone to the police. Later in the film, Karen sees three Black teenagers walking to the neighborhood park and decides to stop them, asking for ID. Feeling threatened by absolutely nothing, she calls her brother, a police officer, to come save her. The teens are arrested and detained.

When the trailer dropped earlier this summer, it immediately received backlash, including a tweet from writer Roxane Gay asking if it’s an SNL skit. At just over two minutes, the preview highlights some of the anything but subtle dialogue — including Karen’s “There she is slaving away in the kitchen” comment to Imani at their housewarming party and Imani asking, “We have a white entitled neighbor named Karen?” — showing the film does seem to be somewhat aware of its ridiculousness. But there are many more cringey moments in the 90-minute film.

About four minutes in, Imani says to her husband, “You are a strong, beautiful, intelligent, and woke Black man.” Less than 20 minutes later, Malik tells her, “You are a beautiful, intelligent, sexy, college-educated, socially aware, and on top of that, a strong beautiful Black woman.” There’s nothing wrong with these sentiments, but they are practically identical. Admiring each other for being “woke” and “socially aware” is out of place among the other attributes.

The decisions the characters make are illogical. Karen asks Malik to help her put antifreeze in her car and, for some reason, he does it. It spills, and she invites him in to wash his hands even though his house is literally right there. In her bathroom, he finds a soap dispenser with a — wait for it — confederate flag. She also has vintage photos of confederate soldiers hanging up, which is another unbelievably odd décor choice for a bathroom.

Everything is obvious and surface level with zero nuance. When Karen catches Malik smoking weed in his car outside his house, she takes the opportunity to passive-aggressively threaten him, while using words like “migrating” and “infiltrating,” just in case we didn’t grasp she’s racist by now.

At the beginning of the film, Karen installs security cameras all around the outside of her house including one facing directly at her new neighbors. She watches security cam footage in a control/movie theater room equipped with popcorn, or cigarettes, depending on her current state of mind (popcorn when she’s enjoying the couples’ bewilderment and frustration caused by her; cigarettes when her tactics don’t go as planned).

Karen’s behavior is confusing at times. She very clearly abhors Black people, especially in close proximity to her, but she’s also sexually attracted to Malik. There is no logic to racism, and Karen possibly intended to show just how unstable some people are and how their inner demons and fear of otherness manifest as a strong hatred toward others.

Among the backlash, Twitter users noted the similarities to Jordan Peele’s work, calling Karen a knockoff of Get Out. Daniels welcomes the comparison, but for him, Karen is “a feel-good film.” He says, “It’s about redemption. It’s educational but it’s also entertaining.” Actor Taryn Manning says that she felt “a social responsibility to take on this role.” Police brutality, and racists targeting Black people just for existing, are very real problems. This attempt at satire is a complete misfire.

There are no redeeming qualities to this film. The writing, acting, and production elements all fail to deliver. The editing is abrupt and clunky, cutting from one day to the next without any hint of it being a different day, other than the characters’ wardrobe changes. Nothing about Karen is funny or scary, and any drama is flattened by the awkward acting and cringy dialogue. Maybe it can be a “so bad it’s good” type of movie, but in general, it’s all bad.

Karen is available on September 3 on demand and in select theaters. It will also air on September 14 as part of BET’s “Summer of Chills” lineup.