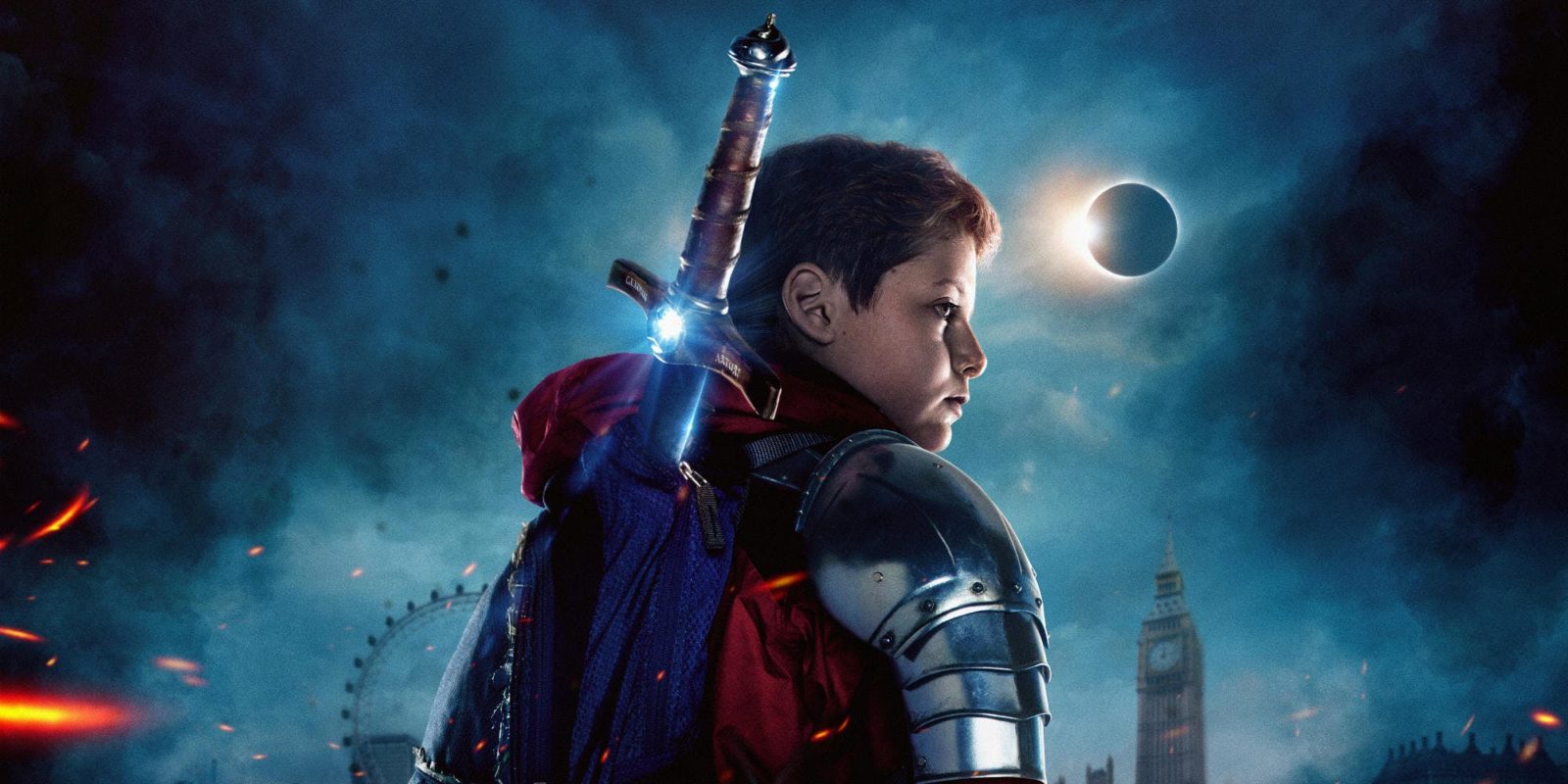 In 20th Century Fox’s fantasy film The Kid Who Would Be King, an epic Arthurian legend is cleverly translated into a modern day context by director and writer Joe Cornish. It’s the classic tale of an ordinary kid, Alex (Louis Ashbourne Serkis) thrust into an extraordinary journey that he is predestined to undertake and fulfill.

Alex is average, comes from a single-parent household, has compassion for the underdog, and a heart of gold. It could have been his unexceptional existence or his heightened sense of empathy that led him to defend his best friend Bedders (Dean Chaumoo) as he is being bullied by a menacing Lance (Tom Taylor) and a calloused Kay (Rhianna Dorris) — but Alex’s pouncing on Lance leads to a chain of events that literally propel Alex in the direction of his destiny.

Alex’s intervention in the bullying of Bedders leads him to a desolate construction site where, in an attempt to escape from Kay and Lance, he slips off of a ledge and discovers the sword Excalibur. Unbeknownst to him, it is only he who has the power to remove the sword and he was preordained to do so. Alex, presumably a descendant of King Arthur himself, has been chosen to find a portal to the underworld to save all of Britain from an evil eternal slavery. In a turn of events, bullies Lance and Kay are now reluctant allies on a mission to fight an ancient evil.

Cornish provides a syllabus for viewers who may not be familiar with Knights of the Roundtable literature and lore through a book that Alex’s dad supposedly left for him when he was a child with the inscription “once and future king.” Through clues within a book left to him during his childhood, Alex and his allies are able to endure each encounter they face on his quest. But that doesn’t stop the privileged and entitled Lance from trying to usurp authority over the sword that only Alex has the heart, integrity, and purpose to fulfill. In one scene, Lance, in his arrogance, misuses the Excalibur sword and breaks it. Alex, having foreknowledge of the Lady of the Lake, calls her forth to restore the sword, and indeed she does.

With the removal of the sword from the stone, Alex has unknowingly unleashed an ancient evil helmed by the centuries old demon of Morgana (Rebecca Ferguson), or Morgana Le Fey, the legendary treacherous half-sister of King Arthur.  Morgana awakes and unleashes darkness, an evil army that arises and fights by night, and an unearthly vengeance into the atmosphere. This evil manifests as people vanishing during the night time, Alex and his knights being hunted, and creeping vines traveling to the home of Alex.  It’s ironic that the scenes in which Morgana awakens are beautiful. Deep within the bowels of the underworld, she begins to hiss and slither loose from the centuries old roots and vines that have draped themselves over her throughout the years. Youthful-looking on the surface with skin that is clean, and pristine vines, branches and soil adorn her hair like ribbons — there’s a familiarity of her appearance that reminds me of the spirit of Medusa. At times, one starts to think that Morgana means well until her true essence comes forth shapeshifting into a winged-creature with fangs and a tail.

The attention to detail with set, location and costume design is magnificent. Ferguson, as Morgana whose goal was to “prey on their weaknesses and crumble their faith,” truly personifies all of the greed, entitlement, envy and vengeance that this ancient evil has come into the Earth realm to release. The use of visual effects and lighting in this film is just beautiful. The sight of trees fighting with swords, Morgana beautifully unraveling from the depths of the soil, creative transfigurations, and the gorgeous lush countryside settings made for a beautiful backdrop of good fighting evil.

Merlin, A Shapeshifting Wizard and Mentor

Merlin (Sir Patrick Stewart), a centuries-old wizard, manifests himself to Alex in the form of a Young Merlin (Angus Imrie) to warn and aid Alex on his quest. The character of Merlin shapeshifts into three forms at any given time at the command of a turbulent sneeze. Merlin’s shapeshifting nature is used to aid the young crew during sticky situations. It is Merlin who trains Alex and his chosen knights in wizardry, sword-fighting, and locating portals to enter other realms. In one scene, tourists are visiting the ruins of an ancient site, but Merlin and his magical powers are entering a portal at this very site. It is Merlin who through sorcery manifests four swords out of one sword so that Alex, Lance, Kay, and Bedders can be better prepared in the art of sword-fighting. In one instance, trees began to move with human-like qualities while challenging Alex and his knights to use their swords. Without the assistance of Merlin, his magic and working together as a unit, Alex just may have not completed the quest.

The story shows there is benefit in making your enemy your ally. It also displays how there is power in numbers. Most importantly, The Kid Who Would Be King is about what happens when you use your gifts for good as opposed to evil while also serving as a warning of what happens when someone has privilege but no integrity. With the assistance of students at the Dungate Academy, Alex is able to overcome a wicked and evil army. With the magical gifts of Bedders, the determination of Kay and Lance, and the heart of Alex, an ancient demon was destroyed. While Alex did not come from privilege, had an absentee father, and at times did not think that he was worthy, he did not give up. “You’ve turned us from enemies to allies.” “You can’t give up. It’s not allowed.” “You need nothing but that which you already have.” These inspirational messages throughout the movie are positive anthems that young audiences can take to heart and apply in their lives.

This PG-rated film doesn’t put any human characters into too much danger, and there isn’t much blood and gore at all. The scenes are exciting and action-packed while there are many positive messages nestled within the screenplay. Seeing young actors suited up in armor and fighting evil for the greater good while riding off into the distance creates a positive image and message of empowerment for younger audiences. However, more conservative audiences might find the introduction of magic, shapeshifting, and sorcery to a young audience something to be aware of. Be prepared to have conversations with your children about what to do with supernatural gifts and the consequences of what can happen if power gets into the wrong hands. While The Kid Who Would Be King is not too dark, it definitely does not shy away from introducing hexes, witchcraft, and ancient portals to kids.

The Kid Who Would Be King premieres nationwide on January 25, 2019. Check out the trailer below.

‘The Kid Who Would Be King’ Cast and Crew On Nobility, Scenery and Excalibur!