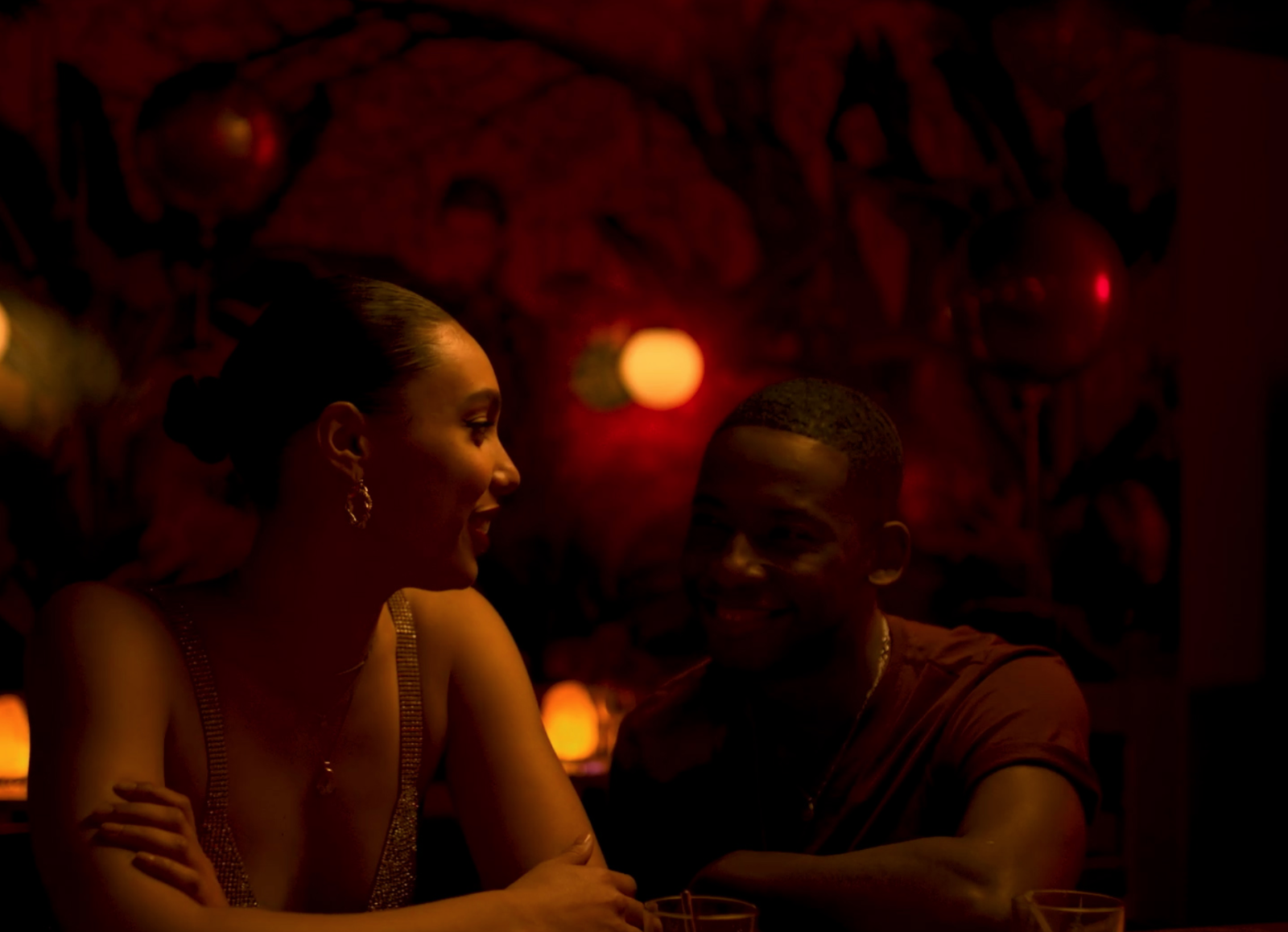 Learn to Swim is a beautiful film that I know Ava DuVernay’s ARRAY is proud to share with the masses. The brief view of love and loss amidst a backdrop of Latin and jazz fusion is a pleasure to watch and listen to. Learn to Swim premiered at TIFF 2021 and was chosen as one of TIFF Canada’s Top Ten films. The film was produced in participation with CBC Films. It was released in Canada by Mongrel Media and by Array in the US and internationally. It is an independent film by new artists with loads of potential. It’s not perfect, but Learn to Swim is still a great watch.

Directed by Thyrone Tommy in his feature-length debut, Learn to Swim captures grief and pain in a very sensorial way. Written by Tommy and Marni Van Dyk, the film is a diverse look at the contemporary jazz scene. Learn to Swim follows Dezi (Thomas Antony Olajide), a doggedly private, talented saxophone player, and Selma (Emma Ferreira), a vivacious but less experienced singer.

When they meet there is noticeable sexual tension, but their temperaments make a rocky road to romance. Other characters include bandmates June (Andrea Pavlovic), Jesse (Khadijah Salawu), Sid (Christef Desir), and Charles (Jolly Amoako). They highlight the workday world of musicians, whose excitement over their creative efforts is stifled by their meager profession.

One of the major highlights of this film is the music. Beautiful slices of jazz are used to enhance and move the story along. The music, diegetic and non-diegetic, are poetically reflected in this intricate narrative. The romantic and sexual tension between Dezi and Selma are explored primarily through music, whether it’s the music they play, create, or just listen to.

Almost all of the music was composed specifically for the film. The music captures the heartbreak, exhilaration, and tragedy of this film. For Learn to Swim, dedication to the role and craft was never in short supply. The actors learned to play their instruments for these roles. It’s hard to decipher where they end and the backing track begins.

The cinematography that couples this music is divine. Cinematographer Nick Haight evokes classic Blue Note vinyl album covers, capturing the aesthetic and nostalgia of an era long forgotten. The cinematography personifies the music and gives a dreamscape look to the film. Colors play an important role in many films but especially in the storytelling of Learn to Swim. Haight uses the tone, colors, and music to his advantage as he gravitates to the energy and vibes of these low-lit sound studios. This makes it all incredibly beautiful and intimate.

Things go slightly askew in the pacing and the first few time shifts. Shuttling between two different timelines is no easy venture. The first few time jumps were missed and made for some confusion. The shift from past to present wasn’t clear. With such an intricate narrative where each moment counts, it’s a shame that the film wasn’t clearly connected at the beginning.

Reflecting on the ways both memory and grief can take control of one’s life needs to have a strong start and a strong ending. I appreciated the bookend scenes, but that beginning needs to be tightened up. Once you find your footing, the film flows and the title becomes clear.

Themes of loss and grief are explored well in Learn to Swim. It’s a simple story told in a deep and complex way. These themes are best portrayed through Dezi — interesting, talented, and layered, his silence steals the show. Olajide brings him to life in a powerful way. Ferreira, as Selma, portrays a young, confident woman whose insecurities are hidden behind the songs she sings and the music she makes.

While Olajide and Ferreira play well off each other and give a convincing portrayal of two people in love, I needed more. The stakes and tragedy are played up, spiraling from a relationship I needed to see more of on screen. Their chemistry is deniable. The jumps between them together, versus their flirty back and forth, weren’t clear. I wanted to see them together more and to feel that knot in the stomach pain that Dezi was manifesting on screen.

Learn to Swim is a strong feature debut that balances performance and feelings. It’s romance. It’s a Shakespearean tragedy. Everyone should enjoy this sensual feast for the eyes and ears. From some perspectives, you might think of A Star is Born. But, Learn to Swim hits different. It’s such a proud moment to see films like this making their way to the screen. I appreciate DuVernay and others making a way for Black voices to be heard. Even with its flaws, people should see this film not only for the Black excellence that it is, but for the all around great storytelling.

Learn to Swim is currently streaming on Netflix.