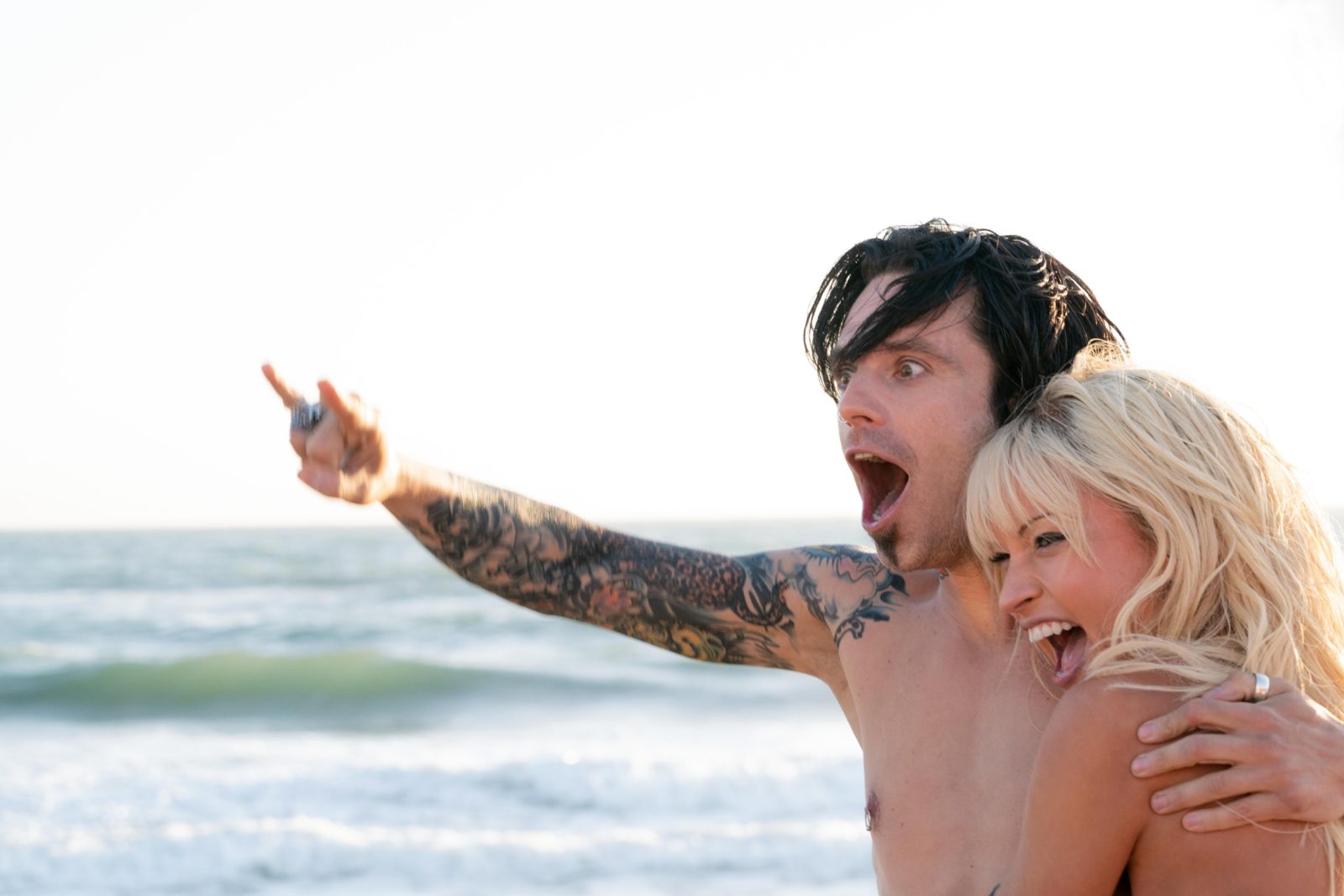 While we’re apologizing to the women who’ve been torn apart in the media for years — Britney Spears, Megan Fox, Janet Jackson, Marcia Clark — let’s add Pamela Anderson to the list. Though there have been documentaries, articles, and books written about her life, Hulu’s Pam & Tommy shines an even brighter light on the cruelty and rampant misogyny she endured. Written by co-showrunners Rob Siegel (The Wrestler) and DV DeVincentis (The People vs. O.J. Simpson: American Crime Story) and directed by Craig Gillespie (I, Tonya), the eight-episode limited series goes beyond the tabloids and pulls back the curtain on the first viral celebrity sex tape scandal.

Pam & Tommy chronicles the relationship between the actor and Playboy model Pamela Anderson (Lily James) and former Mötley Crüe drummer Tommy Lee (Sebastian Stan), including the first time they met, Tommy’s public proposal, and their immediate beach wedding, all of which occurred in less than a week. But it’s not just about their romance. We get a look at their individual struggles, like Anderson’s frustrations with not being taken seriously on Baywatch, and Lee’s music career post-Mötley Crüe.

The series is an adaptation of Amanda Chicago Lewis’ 2014 Rolling Stone article about construction worker Rand Gauthier (Seth Rogen) and the events leading up to the break-in (aka “Operation Karma”). The first episode focuses on Gauthier’s tense interactions with Tommy Lee during renovations. Lee’s constantly evolving ideas were more than frustrating for Gauthier and crew, meaning undoing previously finished work and redoing it.

Lee fired the crew and refused to pay for the work already done. When Gauthier returned to collect his tools, Lee threatened him with a gun. Hellbent on revenge, Gauthier later stole a massive safe full of firearms, jewelry, and cash, but it was a home video that would lead to the big bucks. That’s the setup for the series, which then follows all the characters as they handle the outcome of Anderson and Lee’s sex tape distribution.

Pam & Tommy has a similar tone to Craig Gillespie’s I, Tonya (also starring Sebastian Stan), which follows all of the absurdity that surrounds high-profile crimes. However, Gillespie doesn’t make light of the crimes. Both the series and I, Tonya have genuinely heartbreaking moments, particularly for Pam and Tonya. The tracking shots and close-ups are a lot alike as well, giving it a documentary-like style without the shakiness.

Another similarity to Gillespie’s previous film is the series’ examination of misogyny in the media and society in general. Paparazzi culture hasn’t gotten any better, and now there’s the internet to make it even easier to violate anyone in or out of the spotlight. In the series, Pam repeatedly tells Tommy that this is a significantly different experience for her as a woman. There’s also the narrative that being a sex symbol means giving the world unlimited access to your body.

Lily James may not be the first actor who comes to mind to play Pamela Anderson. The hair and makeup department(s) did award-worthy work, but James took it to the next level by capturing Anderson’s essence, which is arguably more important than anything when playing a real person. The British actor delivers a brilliantly nuanced performance, completely embodying Pamela from the distinct voice down to the way she chews her gum. It’s the element of the series that will likely be most talked about and praised, and rightfully so. James told Variety, “I wanted to get that energy and that impulsiveness and that spirit that she has when she’s in front of the camera.” She succeeded.

Sebastian Stan is always incredible in every role no matter the genre. He may not have as much in terms of hair and makeup, but Stan has a natural ability to fully transform into a character. As Siegel says, he’s a “straight-up chameleon.” Like James, the actor clearly studied Lee’s mannerisms and inflections, truly becoming the drumstick-twirling, life of the party rock star Tommy Lee. Stan also kills it on the drums, a skill that takes great commitment to learn.

Since the series is set in the mid-to-late 1990s, I fully expected a banger soundtrack and the series delivered. Throwback jams of various genres play throughout the series, and with the music comes the ’90s-era fashion. Tommy is often walking around in a thong and boots, covered in a sheen of sweat, and sometimes wearing a gorgeous silk robe. It’s definitely a look.

Pam & Tommy is a lot of things. It’s a fascinating look into one of Hollywood’s biggest scandals and the wild romance at its center. It’s a tale of revenge, fame, love, and greed, falling into multiple genres including black comedy, biographical drama, and true crime. I laughed, I gasped, I shed a few tears. It’s honestly one of the best miniseries I’ve seen in the last few years. Plus, Jason Mantzoukas (Big Mouth) voices Tommy Lee’s penis, which is something I fully support and greatly appreciate.

The series is produced by Craig Gillespie, Robert Siegel, and DV DeVincentis, along with Seth Rogen, Evan Goldberg, James Weaver, and Alex McAtee for Point Grey, as well as Megan Ellison, Sue Naegle, and Ali Krug for Annapurna.