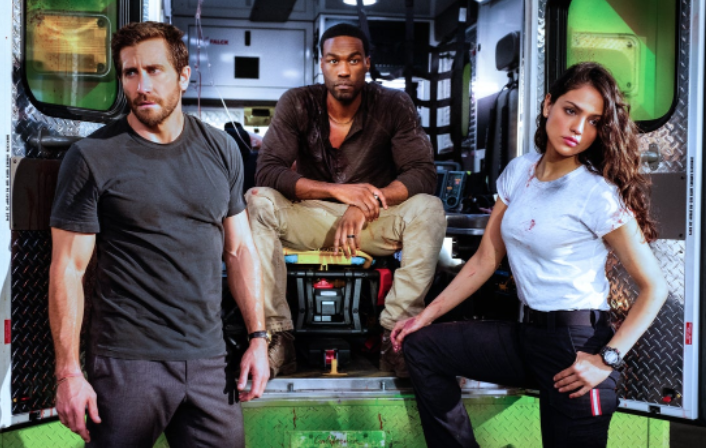 Michael Bay’s Ambulance is a thrill per minute! Too bad there are 135 of them. Excepting about 15 minutes of setup, the action gets going and never stops until about 20 minutes before the end. That’s when there’s a ton of slow motion. While this hectic action can be maintained in a 90-minute property, 2 hours and 15 minutes is a lot of adrenaline to spend.

The film revolves around an unlikely pair of brothers thrown together by the foster system. Will Sharp (Yahya Abdul-Mateen II) is fresh from the military and trying to find stability and financial security for his new son and ailing wife. Danny Sharp (Jake Gyllenhaal) stayed home and picked up the family business of robbing banks and vandalism.

Will joined the army to escape the life of crime while Danny briefly embraced it. He’s ready to leave life now… right after one more score. It’s a big one — $32 Million big — and he’s got everything he has tied up. Which includes his brother Will. From the first moment of the film, Will believes he’s less than innocently going to ask his brother for a loan.

He does so reluctantly and with caution from his wife. However, he’s woven a web of lies about being able to pay for a surgery she desperately needs. Will goes to Danny as a last resort, but little does he know that Danny’s plans include him, and Danny knows what buttons to push to get his way.

A bit of happenstance and bad luck derail the robbery. Danny and Will are left hijacking an on-site ambulance with an injured cop in the back and a seasoned yet jaded EMT named Cam (Eiza Gonzalez).

Bay uses some interestingly frenetic directing choices. There are long swoops from the tops of skyscrapers toward the street, but they are cut short, disrupting the shot in a jarring way. It could be effective, but the timing seems off. The timing throughout the film seems to be off. Jake Gyllenhaal tries for several darkly comedic moments, but there’s not enough time to land. So it feels off-putting, especially since his character lacks charm.

That isn’t to say the movie isn’t successful. Normally, acting takes a backseat to these big-budget films, but everyone is playing their parts and doing it well. I only wonder if there are too many twists and turns that sacrifice the storytelling. A big part of the film relies on us sympathizing with Will.

Danny’s behavior is so cringeworthy that it’s hard to imagine why Will would trust him. Gyllenhaal’s choice to retrofit his character from The Guilty into someone even more entitled and dedicated to a life of crime is an interesting take. I’m not sure it’s entirely effective. Towards the beginning, we get the idea that the two were estranged — especially as Will chose the army over his family. Not only Danny, but he misses the birth of his son. But their bond isn’t established past a “have I ever let you down? Don’t I always get you out?” with a simple agreement and no explanation.

Abdul-Mateen does a great job of selling the connection and there are times of closeness when he and Gyllenhaal really sell their brotherhood — sometimes to the utter confusion of others. It’s these moments when the film works. Yes, the special effects are typical Bay-mazing, and they’re loud and big. There are some legitimately surprising moments, but again, there’s a bit of disconnect between the action of the film and the heart.

It feels odd to say, but the film tries too hard to maintain a sense of reality. This means, the exposition is sewn into the characters, which is good; but it lacks detail to fully understand connections, which is not as good. A big part of these films is the deaths, and if we’re not connected to these characters, the deaths become background noise.

It’s a hard criticism because there are times that it works, specifically in Gonzalez’s Cam. Cam is jaded but capable. She’s also a smart mouth and headstrong. She makes capable choices, but she never loses her fans and it’s done without knowing a whole lot about her as a character. So in some ways, it’s effective, but the effectiveness is not as consistent as it could be.

Ambulance also serves as an unintentional love letter to Los Angeles, downtown especially. There are gritty shots of familiar streets and we see some of the local color in the background. One shot features a man decked out in a gold suit while another features a man in a monk’s robe, running haphazardly down the sidewalk.

In both cases our characters are undeterred and it’s a good measure of many of DTLA’s commuters and residents. Several times the ambulance or police tear through encampments and generally wreak havoc upon the city. There’s even an extended scene in the LA “river” and anyone living here will know exactly why those quotes exist. In my screening, someone wondered if they had to add water to the river and I think they did.

Ambulance has its moments, and despite its bomBAYstic nature, it can deliver the occasional heartfelt moment that keeps you in your chairs. But overall, it’s a grandiose action film that favors flashy stunts over character development.

I would recommend it for someone who is just ready to lounge in a theater and desperately wants a movie that is worth the overpriced snack they purchased and consumed during the 15 trailers. Ambulance definitely gives you your money’s worth and is a worthy film for the genre.

Ambulance premieres in theaters on April 8, 2022.