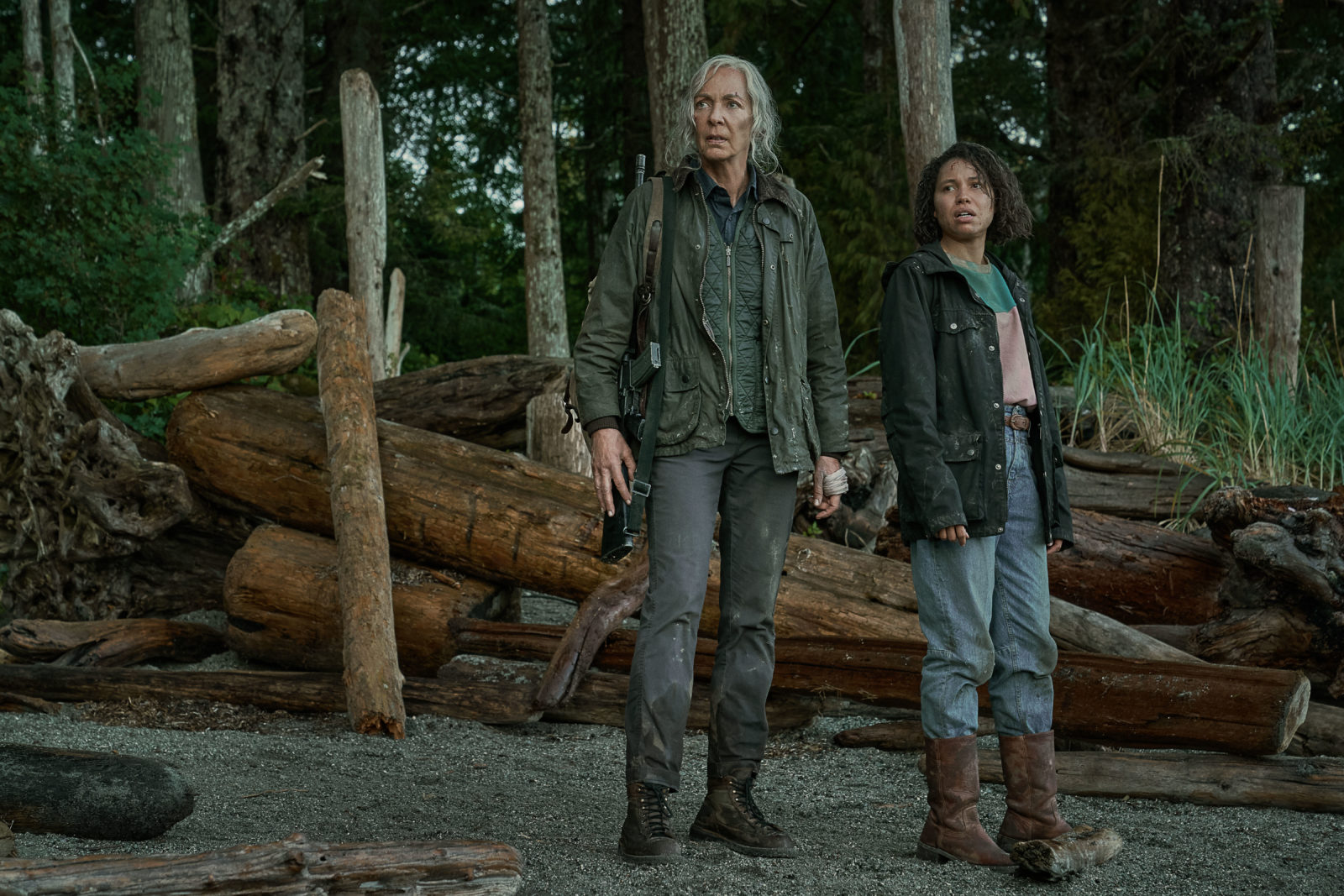 Written by Maggie Cohn (The Staircase) and Jack Stanley, Lou follows the titular landlord (Allison Janney) as she somewhat enjoys her solitary existence on an island in the Pacific Northwest with her dog Jax. The first few minutes establish that, although she’s reasonably well-liked in town, she’s feared to some degree. Not because she puts off dangerous vibes, but more like, “Here comes that old grump.” Basically, Lou’s inability to be personable makes people uneasy, so they keep their distance.

The enigmatic Lou rents a trailer to Hannah (Jurnee Smollett) and her daughter Vee (Ridley Asha Bateman). We’re introduced to the young single mom while she’s simultaneously doing laundry and playing with her daughter. Unlike her stoic landlord, she has a warmth to her. There’s some tension when the two women interact, mostly because Lou, like every cinematic landlord, is hounding Hannah for rent.

During a gnarly rainstorm, Vee is taken by Hannah’s violent ex, played by the talented and underrated actor Logan Marshall-Green. She runs to Lou’s place to use the phone. Naturally, it’s out. Lou takes the lead, and they set out to find her daughter. I’ve read a few descriptions of the film that say Hannah “begs” Lou for help. But it’s more like she shows up to use a phone that doesn’t work, quickly rambles off what’s going down, and Lou decides this is her problem now, too.

Even though she’s known for her comedic roles, Janney really knows how to play a woman hardened by her past. The character of Lou isn’t quite LaVona Golden (from I, Tonya) level, though. Janney told Entertainment Weekly that Lou is “a woman of few words,” who is “kind of a scary figure in town.” She’s definitely intimidating but has a sense of humor and is still likable.

​​As seen in the trailer, Lou ominously burns redacted documents and old photos in her fireplace. We don’t find out what her deal is until later. It makes a little more sense once we see she’s an unexpected badass with mysterious expertise the killing. She also knows how to live off the land. Right away, she’s shown hunting and skinning animals, so if that grosses you out, I wouldn’t eat while watching the first four minutes at least.

Lou and Hannah aren’t a likely pair. Along the way, they discover they have more in common than they thought. Lou loads up on weapons and whips out all this knowledge on tracking people on the run. As a single mother and survivor of an abusive husband, Hannah’s picked up her fair share of survival tactics too. She’s a mama bear going primal, not a damsel in distress.

Once the storm is in full swing, the characters spend most of the film utterly rain-soaked. Their trek through the wilderness of the San Juan Islands is a rough one. Lou was filmed in Vancouver, British Columbia, Canada. Despite the raging storm and terrifying circumstances, the island’s scenery is stunning. Having ugly things happening in a beautiful place reminds me of the picturesque fishing town in Midnight Mass.

I don’t see it as a revenge thriller in the traditional sense. It’s more of a “rescuing a kidnapped child” thriller. In an interview with Screen Rant, Smollett said, “That was a very interesting dialogue to have about women and womanhood, and then to put that in the action genre space was just so thrilling and exciting.” She continued, “Because it’s not a message; we’re kind of forced to work together and make our way.” I also think it’s a combination of the writing and chemistry between Smollett and Janney that makes the emotional moments feel more authentic and not like action-thriller tropes.

When it was announced back in 2018 by The Hollywood Reporter, it was described as “being a tonal mix of Thelma and Louis and Taken.” It’s a description that’s sure to get people to watch. But calling Lou a female Bryan Mills or John Wick is reductive. Thankfully, Lou doesn’t have a moment where she explicitly tells someone she has a “very particular set of skills.”

It may not be totally action-packed but the fight scenes are exciting and very well done; particularly an epic one towards the end that I won’t spoil. Janney said that she trained with stunt choreographer and actor Daniel Bernhardt, (who you might not know by name but will recognize from films like Logan, Atomic Blonde, and as the guy who gets his legs broken by Harley Quinn in Birds of Prey).

Anna Foerster’s Lou is a compelling thriller starring two of the most talented actresses working today who deliver the complex emotions and physicality that make their characters people we want to root for.