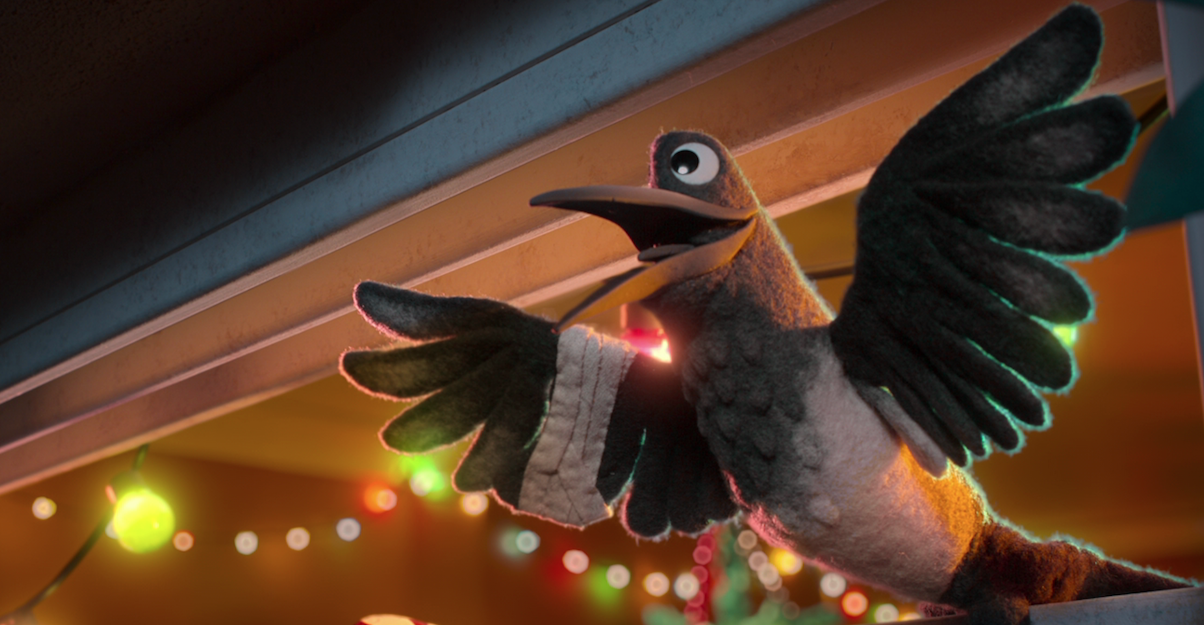 The holidays may not be all about sneaking crumbs, family bonding, and swiping the perfect Christmas sandwich, but for one Robin it is.

Robin Robin is a lighthearted Netflix short film that offers visually satisfying stop-motion animation and warm musical notes to evoke snuggly feelings for the entire season. This family movie isn’t exceptional, but it will definitely be a good choice to add to the holiday lineup for some cheer.

Created by the four-time Academy Award-winning UK animation studio Aardman Animations and co-written and directed by Daniel Ojari (Slow Derek) and Michael Please (Elliot from Earth), the short follows a young bird that is found by a family of mice as an egg and adopted. She questions where she belongs as a bird navigating a mouse’s world. She isn’t quite a mouse or quite a bird, so she embarks on a life-changing adventure to bravely soar into her self-discovery.

The voice cast stars Bronte Carmichael (Christopher Robin), Adeel Akhtar (Utopia), Gillian Anderson (Sex Education), Amira Macey (Out of Orbit) and Richard E. Grant (Gosford Park). Carmichael’s portrayal of Robin is innocent, inquisitive, and eager to explore. This coming of age film is one that tugs ever so gently on the heartstrings.

It’s a fairly predictable storyline that follows the trend of many other animated children’s films, yet it isn’t sloppy or annoying. There are some musical numbers and a moral lesson about embracing who you are all wrapped with a pretty Christmas bow.

This tale packs a short magical plot in only 30 minutes, but it’s the animation that’s most impressive. The stop-motion is immersive, with the textures of the real-life puppets, places, and faces of the animal characters. The depiction of nature and the mindful attention to detail are exceptional.

From Robin’s cute little feather mouse ears to various trinkets, food items, and other subtle details throughout the movie, the aesthetic is eye-catching. The use of needle felt, clay, foam, rubber, and more make this short’s visual appeal truly come together. With an average plot, the animation is a true cherry on top of a story that could be disregarded.

Most of the songs are easily forgotten, with the exception of Gillian Anderson’s voice as the cat, which is brilliantly written and purr-fectly fitting for the cat’s personality. Fortunately, for those who simply aren’t fans of any kind of long musical numbers, the songs are the appropriate length for the film’s short form. They get in and out of songs faster than most may expect from an animated movie.

The central message of the story is very simple and leaves nothing to the imagination, which makes it accessible to audiences of all ages. Robin wants to prove that she’s worthy of her family and isn’t a failure, but ultimately discovers that she’s so much more than “good” or “bad”; she’s her perfectly imperfect self.

This takeaway is further exemplified by Aardman’s partnership with the largest nature conservation charity in the UK, RSPB and Twinkle Educational Publishing, in an effort to help families experience over 30 nature reserves in the UK and even participate in some Robin Robin themed festivities, including food and crafts.

This special event will run from November 24 to January 10 with the goal of helping children discover their inner powers as they sing and channel the lessons of the movie into their nature walks. Aardman wants children to embrace who they are in the same spirit as Robin does.

The ecological lesson of the film is also an opportunity to talk to children about protecting the environment, specifically through animal conservation and protection. By introducing empathetic and sympathetic characters in Robin Robin, the creators convey the need for environmentalism to be a collective effort regardless of age.

Plus, viewers of all ages may even be eager to search for the very plushy-worthy Robin in stores after seeing how cuddly and warm she looks. Each character is easily likeable; even the protagonist has a certain charm. Of course, younger children may find them a bit menacing. With that said, there’s no problem getting on board with this movie.

The storyline could have aimed higher, even for a short film, but it’s not a huge loss to have a simple film either. It’s fitting to watch while wrapping presents or doing some family holiday baking. There’s no need to pay close attention or feel as if any interruptions will ruin the film.

It has the full benefits of a feel-good movie. It’s simple, short, warm, cute and will be available for streaming through Netflix on November 24, 2021.