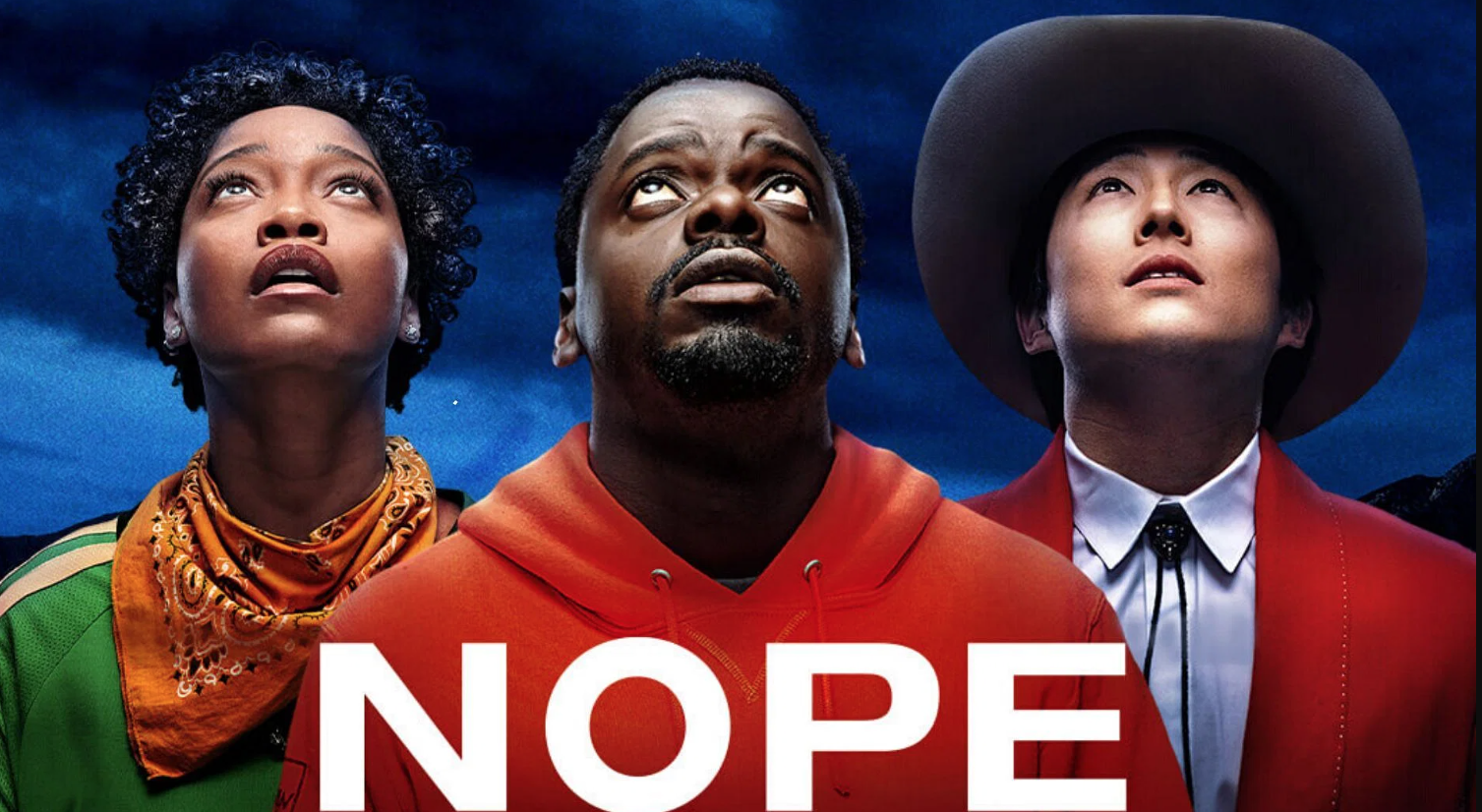 Nope is the newest feature from horror auteur Jordan Peele. He has a way of exposing the true horror of the everyday and turning it into supernatural concepts. In Get Out, Peele exposed the irony in the old saying: everybody wants to be Black, but nobody wants to be Black. In Us, Peele exposed a forgotten society in a stunning exploration of how all of our sides make us true and complete people.

Peele managed this all while scaring the living daylights out of his audience. The stunning visuals, haunting scores, precise script, and stellar cast are just some of the things that elevate Peele’s movies past just a popcorn flick.

The success of his past ventures has made the hype for Nope extremely exciting. We were given just a small premise when a poster was released of a small cloud with a kite-like string hanging from it. Speculation ran wild and there have been panel events and press activations taking you further into the world of Agua Dolce and Jupiter’s Claim.

While the lead-up to the film was interesting, I wonder if it hurts the film? I’m sure Nope is filled with easter eggs, but on its face, it’s a pretty simple story.

An old ranch hand is trying to break in his new horse: Ghost. A freak storm occurs, and Otis Haywood (Keith David) is lost. Six months later, we see his son, OJ (Daniel Kaluuya), a name that is not missed by anyone new he meets, trying to pick up the pieces. He’s a horse trainer and comes from a long line of animal wranglers for film and TV. His sister Emerald (Keke Palmer) helps where she can. He’s got the smarts and know-how and she has the personality. Together they make a good team, but even they can’t account for the folly of man.

Strange occurrences begin that make OJ question his sanity and Emerald question how they can get rich from the idea. On its own, it’s a solid movie. I had a great time and would definitely go see it again. A part of me does wish we’d spent more time on the background of the fissure between OJ and Emerald, what happened to their mother, and why Emerald always feels the need to run away.

Instead, we’re thrown head-in to these family dynamics, but there’s a distraction that makes the Heywood story less impactful. The movie begins with the filming of a ‘90s sitcom in front of a live studio audience. We hear a pop, like a gunshot or a balloon pop — then suddenly we hear screams and see a shoe sitting on its heel with a single dot of blood. Later we learn more about the origins of this tease from Ricky “Jupe” Park (Steven Yeun), owner of Jupiter’s Claim, who is trying to stay relevant in the public eye.

His storyline is fascinating and pokes fun at Hollywood in a way that had everyone in the audience laughing. It was engaging but also completely confusing. I can’t say it goes nowhere because I think it serves a purpose, but I would almost rather it be its own property. Or that there was something more overt that tied Jupe and his plight to the core story. I can’t say more without major spoilers — just know that while I loved his sections, they were slightly incongruous with the film at large.

This is what I meant about the over-speculation maybe being a mark against the film because when you have these huge swings done by the audience, they’ll want a payoff just as big. I don’t know if I can say the reveal is big. It’s thought-provoking, but I don’t know if it’s as earth-shattering as some of the theories.

We see OJ and Emerald enlist the services of a local tech store employee, Angel (Brandon Perea), and experimental cinematographer, Antlers Holst (Michael Wincott). Together they try to figure out the rules of the supernatural occurrences and see if they can capture them on tape. They will defend their ranch and their father’s legacy no matter the cost.

The acting is phenomenal, especially between Kaluuya and Palmer. They have an interesting sibling dynamic that shows that even when they’re at odds, they’re still family. Stephen Yeun does a great job, yet again, I have SO many questions about his character and storyline. The fact he and his younger counterpart made their parts so engaging that I was begging for more is really saying something.

The look of the film is similar to Peele’s other films in which the nights are shot beautifully, and you can easily see dark tones in the light. With the horses and the good guys vs. bad guys of it all, there are definite western vibes — it works well. There was so much care taken with the way things moved and how they showed on screen. The landscape and scenery all add to the story.

I can’t say much more without giving it away, but I will say there was a very confusing design choice. It raised even more questions and caused more distractions. There is also a fleeting biblical reference that connects to nothing and of course talks of “bad miracles.” As different puzzle pieces it’s interesting, but the final picture is kind of unfinished.

Now at this point, I believe in Peele to make stories that are original and memorable and I know there’s a plan for everything. I trust him completely, and I can’t say I’m disappointed with the film, but something is disconcerting about how disjointed it appeared to be.

Overall I do recommend Nope. There were laughs and jump scares, but I would say to guard your expectations. Just throw them out the window and enjoy the movie as it comes.