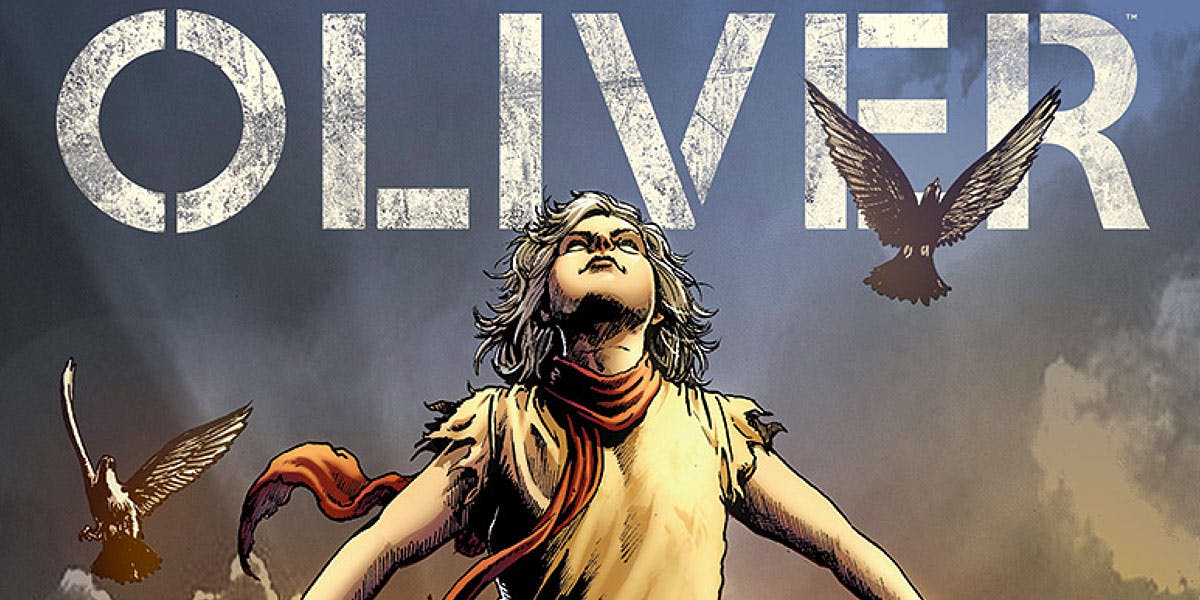 The Pickwick Papers, Charles Dickens’ first novel, is a comic adventure collection published monthly in a series.  Initially Dickens was hired to step in after the untimely death of the original author to craft a story around a series of illustrations. Not much on following directions, Dickens tended to write his own story and the illustrator ended up following his lead. I imagine he was not all that concerned as, The Pickwick Papers were exceedingly popular. In a way, you could say Dickens was a 19th century comic book writer. His second novel, also meted out in a serial form, is the better known Oliver Twist. Given his life as basically a comic writer, it seems appropriate that today his character Oliver Twist is reimagined in a newly released comic entitled Oliver published by Image Comics.

Drawn by Darick Robertson (Happy!, Transmetropolitan, The Boys), Oliver is written by screenwriter Gary Whitta (Rogue One: A Star Wars Story and The Book Of Eli). Often times writers new to comics will provide too much prose, which can undermine the talent of the artist. Then there are times when the artist goes into overdrive to make the reader forget how poorly the story is provided. It is clear that Whitta has easily made the jump seamlessly into comics, as that imbalance and awkwardness between comic partners is definitely not present here. I like the fact that Whitta and Robertson, place their literary and movie Easter eggs throughout the story.  Be sure to check out the character names, signs, books, etc. I’m not saying they forecast what is to come, but it sure is interesting.

It’s obvious that Whitta is a master of storyboarding, as several frames in the story invoke inverted echoes of imagery from the United States–Mexico border. The book opens with a contamination-suited pregnant woman dropping into the arms of those exiled into the no man’s land, instead of the pregnant woman coming to the border of the greatest country on Earth escaping persecution and looking for a better life for her child. The choice of color brings fully forward the dull, apocalyptic landscape that forms the England young, orphaned Oliver lives and grows up in. This may be an artificiality of the advance copy, but when going from page to page it seems like the artist chose a monotone palette and explored that part of the story on that page using basically either a muted yellow-brown, grayish-purple, that often morphed into a black-blue, or an occasional grey color.  Each page would obey the template with just a splash of muted red here and there, which adds to the foreboding as the story unfolds.

It is framed as a mystery, which best I can tell, is intended to be told in three parts.  The events surrounding Oliver’s birth are not known, nor is the source of his abilities. Whitta hints at this but does not share the answer. Therein is where my one concern with this issue lies. I am not sure why anyone should care who or what Oliver is or his purpose for being. As far as I can tell, Whitta has not explained whether Oliver is Neo from The Matrix or Aurora from Babylon A.D. Out of the 28 pages, I just can’t tell.

So, here is the conundrum: Do you get the first issue, hoping for the second? Do you not buy and wait to hear about the second issue, or do you wait for the series to complete and pick up the trade paperback if it is good?  For the speculators, it is easy take the chance as the issue is $3.99. If it is not good, no biggie. If you’re a government employee on furlough, you might want to wait to purchase the trade paperback, after the children in DC get their act together. For those who like a good story, this feels to me like a good one. I recommend that you get this one and ,in true Oliver Twist fashion, tuck in and at least buy one more. Oliver is available at your favorite local comic book store, big box book stores, and online vendors now.