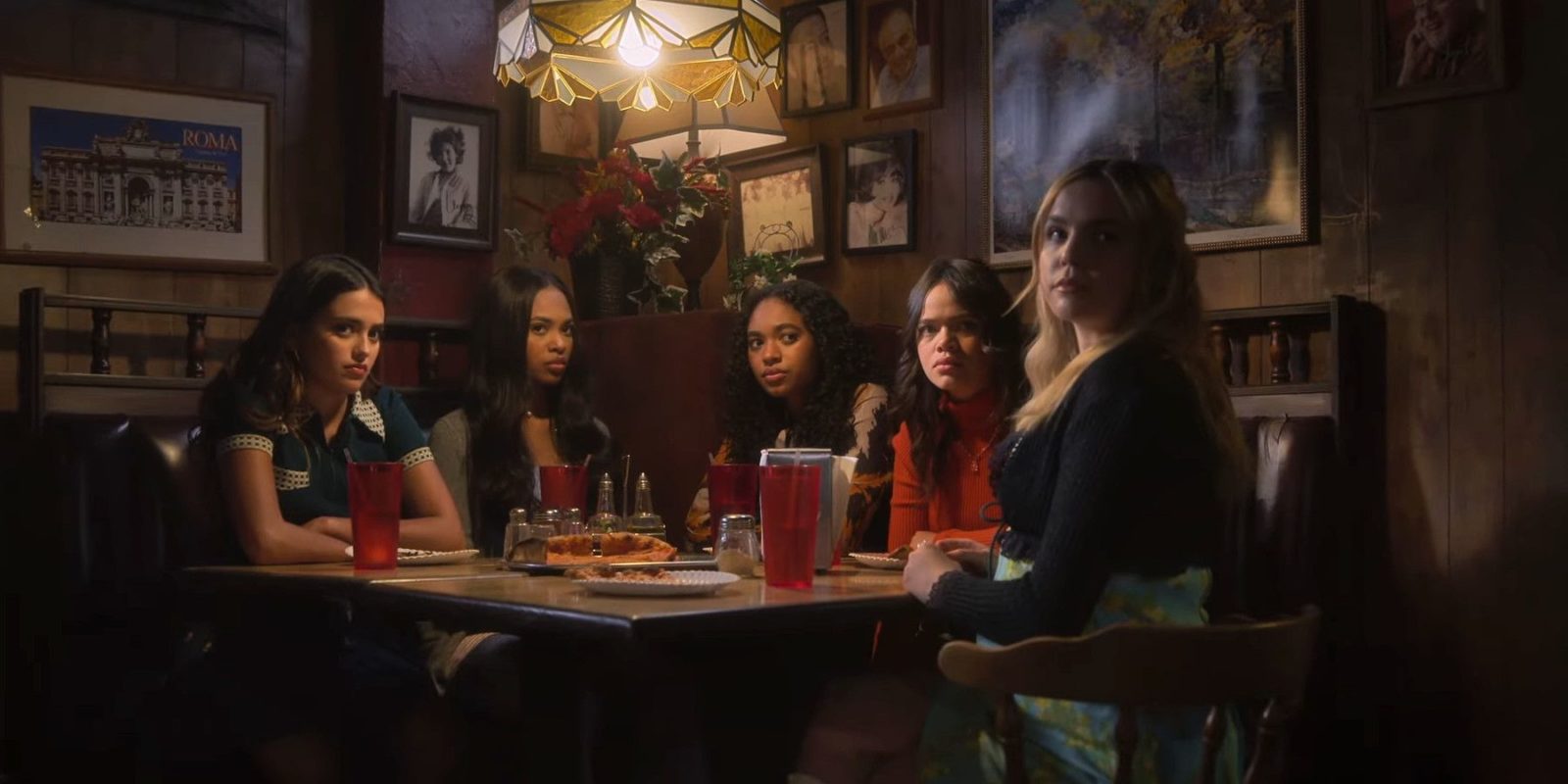 Five years after Pretty Little Liars ended, HBO Max brings us a new set of Liars in a different but equally shady town with dark secrets. Co-creators Roberto Aguirre-Sacasa (Riverdale, Chilling Adventures of Sabrina) and Lindsay Calhoon Bring (Chilling Adventures of Sabrina) developed Original Sin intending to lean more into the horror genre, and they definitely succeeded. When the first episode ended with Rob Zombie’s “Living Dead Girl,” I knew this series was heading in a direction I could get on board with.

It’s not a prequel or a sequel, and even though it’s been called a reboot, I don’t see it that way either. What remains is the same basic premise — teenage girls receiving anonymous texts with threats, taunts, and ominous riddles.

The creepiness begins right away with the opening credits, which were featured in a teaser for the show. We see A with a disturbing array of photos and stolen personal belongings, creating their kill collage/plan. The haunting cover of “Secret” by The Pierces, the theme song to the original, plays in the background.

Original Sin starts with a flashback to a Y2K warehouse rager in Millwood, Pennsylvania. A distraught girl, Angela Waters (Gabriella Pizzolo, aka Suzie from Stranger Things!) makes her way through a sea of partying teens and flashing lights, with Orgy’s 1998 cover of “Blue Monday” on blast. The party comes to a halt when she kills herself by jumping from the rafters onto the dance floor. It’s a bloody mess that sets the tone for the show.

In the present day, we meet pregnant teen Imogen Adams (Bailee Madison) and her mom Davie (Carly Pope), who was one of the teens back in 1999. The night ends in a tragedy, leaving Imogen traumatized and more vulnerable than she already was before. She’s comforted by her friend Tabitha “Tabby” Haworthe (Chandler Kinney), a horror-obsessed aspiring filmmaker who fittingly works at the local movie theater.

Karen Beasley (Mallory Bechtel), Imogen’s ex-BFF and resident mean girl, immediately confronts Imogen when she arrives back at school. Bechtel pulls double duty and plays Karen’s twin sister Kelly, who is the sweeter of the two but still carries Karen’s entitled attitude. Her villainy and misplaced hatred for Imogen come off a little cartoony until the domineering Beasley patriarch (Eric Johnson), who is also the Sheriff, makes his first “you’re not good enough” speech at dinner. Then it makes sense why Karen is such a narcissist. Kelly is more like her browbeaten mother, Martha (Jennifer Ferrin), just trying to stay out of the way.

In true The Breakfast Club fashion, Imogen and Tabby meet the other “liars” in detention: Noa Olivar (Maia Reficco), a track star currently sporting an ankle monitor after some time in juvie. Minnie “Mouse” Honrada (Malia Pyles) is a teen more comfortable with screens than people. Faran Bryant (Zaria) is a hardworking ballerina under the pressure of her mother and strict instructor. From here on out, their lives become significantly more complicated and, at times, downright scary.

Pretty Little Liars had everyone keeping secrets, including the parents. Original Sin takes it further by having the Millwood moms at the center of the story. Tabby’s mom Sidney (Sharon Leal), Noa’s mom Marjorie (Elena Goode), Mouse’s mom Elodie (Lea Salonga), Faran’s mom Corey (Zakiya Young), and Imogen’s mom Davie share a secret that acts as the catalyst for this A rampage.

In this series, we actually see more of A, who has the physicality of Michael Myers and a penchant for sending gleefully threatening taunts like Mona Vanderwaal. This new Antagonist ditches black hoodies and plastic masks in favor of a mechanic’s jumpsuit and a stitched-together face (that probably isn’t made from someone’s skin but definitely looks like it could be) adorned with a stringy ‘do. With this look, A might as well be wielding a chainsaw.

The halls of Millwood High are much darker than Rosewood High. Cinematographers Joe Collins (For Life) and Anka Malatynska (I Know What You Did Last Summer), who each worked on the first five episodes, used Dutch angles that kept the atmosphere unsettling. Bailee Madison told Extra, “What I can say is no one is safe in Millwood, and our show never wants you to get too comfortable.”

OG Pretty Little Liars alum Lucy Hale (aka Aria Montgomery) hosted HBO Max’s Q&A panel with the new cast. Hale said that Original Sin “dives deeper into the various tropes of the horror genre” from a “uniquely female perspective,” which is my favorite aspect of the series. One of the episodes is even titled, “The (Fe)male Gaze.”

Tabby is a hardcore cinephile who can, and will, tell someone all the ways a classic horror flick was problematic. At first, her constant film references were a little much but this trait grew on me (over the five episodes that were available to screen). Chandler Kinney told BGN, “She definitely uses film, which is her greatest passion in life as a bit of a coping mechanism and a way to help her process what she’s gone through and what she’s experienced.”

Despite the occasional cringe dialogue, and naming the entitled queen bee character Karen (a bit on the nose), the main characters are well-developed and unique within the friend group. It’s apparent that Aguirre-Sacasa and Bring value inclusivity given the wonderfully diverse cast, which doesn’t feel at all like “checking boxes,” but rather a genuine effort to reflect the world.

I can see a lot of people, particularly young women, connecting with these characters. The show brings up social issues like mental health, trauma, consent, sexism, toxic masculinity, and racism. Faran has to deal with daily microaggressions from her ballet instructor (as well as Karen). Imogen can’t get through one day without someone (the school nurse, principal, and of course, Karen) commenting on her pregnancy. Noa is looked down upon for her run-in with the law. Mouse’s mothers are helicopter parents due to a past trauma their daughter suffered.

Pretty Little Liars: Original Sin has a much darker vibe similar to shows like Yellowjackets and the recent season of Stranger Things. The series has a lot going for it, especially in terms of multidimensional characters and horror elements. Diehard PLL fans will be hesitant to give this one a go, but if you loved the creepier PLL episodes, like “Welcome to the Dollhouse,” or any of the Halloween specials, Original Sin is a must-watch.

Pretty Little Liars: Original Sin will debut July 28 on HBO Max with three episodes. Two new episodes will follow on August 4 and 11, with the final three episodes debuting on August 18, 2022.