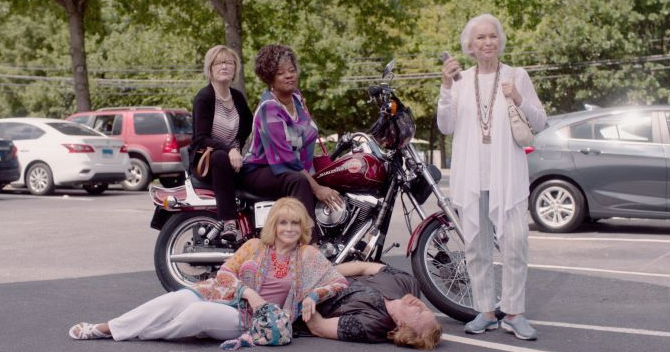 Queen Bees, currently in theaters and on demand, is a humorous, light-hearted look at aging out of living alone.

And before someone says, “That will never happen to me,” Bees looks at that aspect through the eyes of Helen, a widow and grandmother played by Oscar winner Ellen Burnstyn. Life is going pretty smoothly for Helen. Her husband has been gone long enough for her to be used to living in their home by herself. Her beloved grandson (Matthew Barnes) visits often and is very sweet to her, and she has her routines. However, when Helen starts forgetting things and one particular time leads to a major disaster, she’s faced with moving temporarily to a dreaded retirement home. And as they say, hijinks ensue.

Directed by Michael Lembeck, the film features a cast of veteran actors: Ann-Margret, James Caan, Loretta Devine, Jane Curtin, and Christopher Lloyd. Lembeck, who grew up in Hollywood and worked as an actor before turning to directing, squeezes just enough quirkiness out of his scenes without going full-tilt. By spotlighting the small things, he shows an age-old truth: people take the personality traits they’ve learned everywhere they go, even if those traits appear strange to others.

Curtin (Janet), Ann-Margret (Margot) and Devine (Sally) all do a decent job as the cliquish, mean girl Queen Bees that Burstyn encounters at the home. While Curtin’s bad-mannered, mean-faced Janet isn’t far from some of the characters she’s known for (such as in 3rd Rock from the Sun or any number of SNL skits), the solid portrayal creates just enough tension to make the story interesting.

Initially Ann-Margret’s sexy take on the much married Margot imagines what her earlier onscreen sex-kitten characters would be like as seniors. Yet, her scenes with Lloyd are reminders that the Golden Globe winner can switch it up really well.

Devine brings her trademark sweet auntie positiveness to the role of Sally, a Bee with a heart who shares an easy chemistry with Burstyn in a story arc that eventually reveals the tragedy under her sunny facade.

Burstyn is the titular role here and doesn’t really miss a beat in showing that older women are smart and have many identities — from wife and partner — to parent, grandparent, neighbor, friend, and a still-desirable woman.

Caan (Dan) is a retired widower who wants nothing more than to romance Burstyn’s Helen. Caan underplays in scenes with Burstyn, a good call that makes his love interest role somehow better. As Caan plays him, Dan is a man who knows he’s attracted to Helen and gently but firmly pursues her without guile, something that is not needed after people grow older.

Emmy-winning character actor Lloyd, still remembered by generations for Back to the Future films, departs from his usual roles to play a flirty senior with a secret. However, Lloyd and Ann-Margret do not have enough scenes together, perhaps due to sharp edits. Whatever the reason, there was more to mine there.

Rounding out the cast are Elizabeth Mitchell (Lost) as Helen’s stressed daughter Laura, French Stewart as the frazzled retirement home manager, and comic Alec Mapa as the laid-back masseuse, Lito.

Although presented as a light comedy, Queen Bees is a story about the serious business of the latter part of human lives. It touches on what moving into a retirement home can mean for some; giving up control of one’s life or having to be in a place to live out the time before death with far less privacy.

The question is should these issues be given a comedic touch? Or should films about this subject go deeper? For example, what happens when seniors can’t afford to go to a beautiful place like Queen Bees’s characters live in?

The flip side of the retirement home story was recently told in Netflix’s melodramatic dark comedy, I Care a Lot, in which a scammer (Rosamund Pike) took advantage of loopholes in senior care and housing.

Also, as mentioned, some scenes are choppy, leaving parts of the story not fleshed out. Backstories are also lacking. Why not more of Lloyd and Ann-Margret? Why not more about Sally’s problem? We don’t know enough about why Helen’s daughter is so determined to get her into the retirement home, and the resolution is too neatly tied up in the last minutes of the film.

Fortunately, for those of us who think about what we will do when that day comes, the film is based on a true story of a family member of the film’s producer, Harrison Powell.  The real-life story has a happy ending, just like in Queen Bees, which will not win any awards but is easily digestible and won’t leave any aftertaste.

On a scale of one to five, Queen Bees is a three.