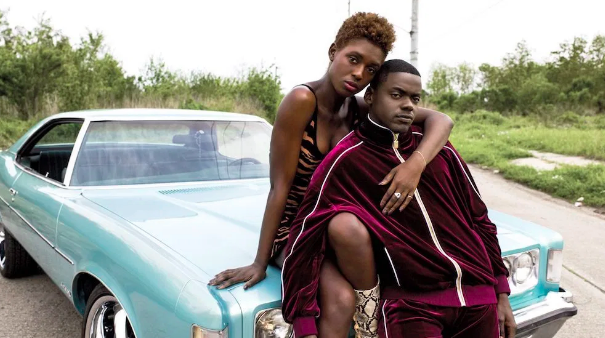 My body had a physical reaction shortly after leaving the theater after watching Queen & Slim.

My stomach was in knots, and my heart was racing. I had to take a moment to take deep cleansing breaths to lower my heart rate. Directed by Melina Matsoukas, Queen & Slim is a film that punches you in the gut. It is powerful and wrought with so much emotion that its ending will leave you speechless.  Queen & Slim takes us on a wild roller-coaster ride of ups and downs that brings us from joyous moments of laughter to feelings of pain and anguish.

The story begins with two unnamed individuals — a man and woman meeting at a diner in Cleveland after a Tinder connection. It’s pretty clear that the two have absolutely nothing in common — even right down to what each have ordered off the dinner menu. The woman, later known as Queen (Jodie Turner-Smith), orders a salad, and the man, known as Slim (Daniel Kaluuya), orders steak and scrambled eggs. Queen is bothered by everything about Slim, including the fact that his eggs were ordered wrong and he failed to correct the waitress, but that’s not Slim. As it turns out, the woman is a defense attorney. She throws shade at the man for choosing the restaurant because she thinks it’s cheap. And although it appears the man does have a blue collar job, he chose the restaurant not because it’s cheap but because it’s Black-owned. There is more than what meets the eye here, and we begin to scrape just a bit of the surface of both Queen and Slim in this diner scene.

Unfortunately, this date isn’t going very well, and the two realize it’s time to get the check and end this evening as quickly as possible. Things quickly go south when the couple is pulled over by a cop in the middle of the night on their way home. The charge? Failure to use a signal. That major infraction along with Slim accidentally swerving the car when he was being playful with Queen led him to be possibly charged for a DUI. The couple, of course, was not drinking nor intoxicated with any illegal substances at the time of their date.

The trigger-happy cop immediately has a knee-jerk reaction, resulting in his gun going off shooting Queen in her leg. Slim begins to tussle with him to subdue him out of fear, self-defense, and to protect an unarmed woman. He grabs for the cop’s gun and shoots him point-blank in the chest, killing him instantly. This first date is now a situation where these two become fugitives, on the run and forced to rely on each other for help and save each other no matter what the outcome may look like.

What is incredibly significant about the character development of each of these characters is how different they become from beginning to end. Queen is more militant, guarded, and take-charge, and her story arc evolves as she slowly lets her guard down. We begin to understand why she’s been building the walls around her for so many years. Slim, on the other hand, is more open, reserved, and trusting of others, even trusting to a fault. (There’s a scene where he hands a strange man a loaded gun, which in my opinion made absolutely no sense.)

However, I felt a great deal of empathy towards his character because he represented being a man of faith, which is close to my heart. In the opening scene of the film, during their first date, Slim is praying over his food. He wears a cross over his neck, and his faith in God is important to him. What I felt the most, though, was shortly after the aftermath of shooting a cop, he had to listen to gospel music on full blast to get his mind right. That was a real moment, and I truly felt it watching that scene.

Slim’s behavior, as well as his story arc, evolve, and it’s almost as if this horrific event was a life lesson that taught the two how to become the best of themselves. This is certainly not to make light of the tragedy of police brutality against Black people because it’s a very real thing, which leads me to my criticism of the film’s ending. I obviously don’t want to give anything away with spoilers here, but the ending was super disappointing for me.

There are other moments of Queen & Slim that stuck with me and replayed in my head like a broken record long after the scene ended and the film kept going. This bothered me. Again, I’m not trying to dive into spoiler territory here, but I’m not sure what kind of messaging is in play here when we see violent retaliation against police by youth as a response to Queen and Slim’s actions. It didn’t feel authentic to me that youth would feel compelled to act that way, but what did feel authentic was the way Queen and Slim were quickly accepted by the Black community when they escaped from Cleveland to New Orleans. The fatal shooting of the police officer was caught on his dashcam and instantly goes viral. The couple’s identity is recognized instantly by everyone around them, and during their time hiding in plain sight, they are embraced and protected by Black New Orleans residents — and that’s a real thing. Power to the people.

That aside, I will say overall the story structure and character development and the incredible chemistry between Turner-Smith and Kaluuya is enough to give this film a shot. Writer and Emmy-winner Lena Waithe digs into this script and gives the audience a big dose of social commentary that resonates. Viewers may debate whether or not they are at peace with the film’s ending. One thing is for certain, it is a film that will spark a conversation and will definitely have families talking this holiday season.