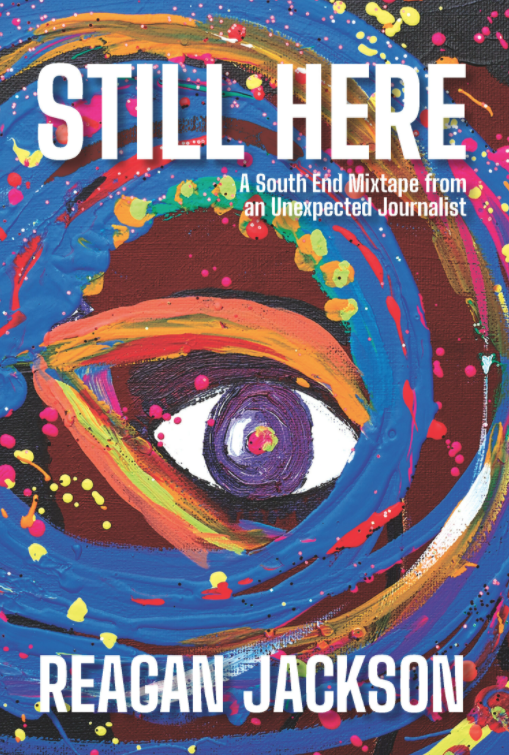 Reagan Jackson begins her collection of essays and articles Still Here: A South End Mixtape from an Unexpected Journalist with a quote from Audre Lorde: “ If I didn’t define myself for myself, I would be crunched into other people’s fantasies for me and eaten alive.” When Black women are allowed to share their stories authentically, the world benefits from their truth.

Jackson landed her first story as a paid journalist after “a rant about the ways in which people of color are excluded from study abroad programs and how the white solution is to mistake color for economic status and throw money at the problem.” She was at a brunch where she met the co-founders of the online Seattle Globalist. After hearing Jackson’s rant, the publication’s co-founder Alex Stonehill told Jackson she should write about it. So Jackson did. She emailed Stonehill her story, he published the article, and he sent her a check. At the time, Jackson was a blogger but had never had anything published, so in this unexpected moment, a journalist was born.

Still Here is more than just a collection of articles and essays; it is the ultimate representation of the Black female experience in the 21st century. The book is succinctly organized into five sections, chronicling diverse aspects of the writer’s experience: “The Hood,” “The Struggle #blacklivesmatter,” “The World,” “The People,” and “The Body.”

In “The Hood,” the article “Brad and Becky Are Coming to Rainier Beach” (South Seattle Emerald, December 27, 2017), Jackson gives us a story not often heard in the media: the perspective of a single Black female homeowner in Seattle coexisting with gentrification. The article takes the reader on Jackson’s house-hunting journey and quickly dives deep into the housing market challenges in Seattle. Jackson poignantly ruminates, “The East African family on the corner disappeared too. I don’t know if they got foreclosed on or not. They were replaced by a Mexican family who lasted less than six months. Now a white family lives there. A white family bought the house across the street too. I’m sure they are lovely people. They put a Black Lives Matter sign in their yard. We wave to each other if our paths cross in the morning, but I can’t bring myself to welcome them properly. Every time I see that sign I think if my life really mattered you would understand that in this white ass city, living in a POC neighborhood has been one small refuge.”

In “The Struggle #blacklivesmatter” section, “Accomplices vs. Allies” (South Seattle Emerald, July 6, 2016), Jackson amplifies the term Allyship Industrial Complex (which Jackson read in a blog post by Indigenous Action Media). After all these years, it names Jackson’s experiences as a Black woman in the ultra-white liberal bubble that is Seattle. Here she deftly sketches her journey through the social justice industrial complex, which began in high school, continued in college and into her graduate program, and even moved into post-graduate professional development workshops and courses where the same conversations about race occur. White privilege is always centered and white liberals are cared for, while the few Black folks in attendance are left feeling even more silenced and unheard. The article is a powerful reference tool of liberation used to do the complex work of dismantling systemic racism by holding up the mirror of truth and shining light on the hypocrisy of polite superficial allyship.

The standout article in “The World” section is “Havana Meets Seattle: Artists Find Common Ground” (Connection, September 29, 2016). Here, Jackson nimbly tells the story of Shontina Vernon, a musician, artist, and filmmaker who could independently finance the Common Ground Music Project (a delegation of majority Black American artists who traveled from Seattle to Havana and Vinales to collaborate with Cuban artists). For Black artists to be able to travel to Cuba and be recognized as American was a profound experience. As Jackson reveals this story, the magical power of travel unfolds through the artist’s experience of Cuba in ways that warm the heart.

Reading this book is like sitting down for tea with your most trusted, brilliant, emotionally intelligent friend who has traveled the world and knows all of the things. Reagan Jackson unapologetically shares the stories of Black communities in Seattle struggling to exist against the dominance of gentrification. Jackson’s worldview provides a unique voice that should be listened to. Her writing is poignant, with a sharp wit and cunning sense of humor. Each article and interview glides off the page and connects to the heart with pure truth and knowing.

Reagan Jackson honors Seattle’s Black communities by sharing the unique stories of people consistently overlooked by dominant media outlets eager to regurgitate the same stereotypes. Reagan Jackson’s voice is here to stay. Still Here: A South End Mixtape from an Unexpected Journalist is a gift of stories you will want to read over and over again and share in documenting this profound age.