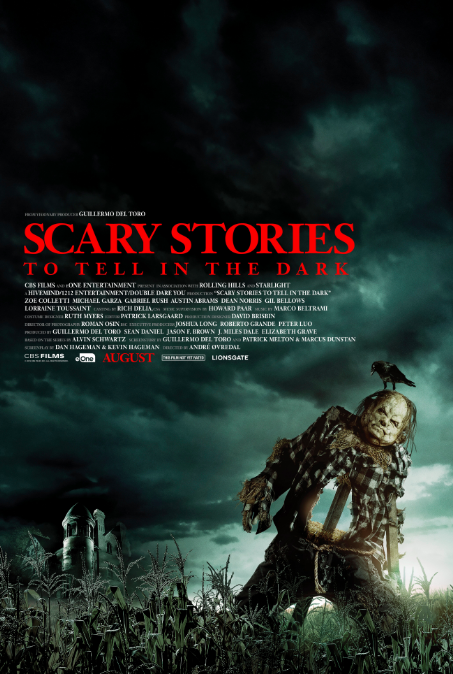 As a fan of the horror genre and films from Guillermo del Toro, I’ve had Scary Stories to Tell in the Dark on my mind for a while.

The film was brought to life by the visionary team of producer Guillermo del Toro and director André Øvredal. I loved the original books by Alvin Schwartz, also known for In a Dark, Dark Room and Other Scary Stories, so this film piqued my interest — and did not disappoint. With the screen story by Guillermo Del Toro, Patrick Melton, and Marcus Dunstan, the film follows a young group of teens who dare to venture in the town’s haunted house. Upon entering, they find a book of stories written by a young girl with a tortured past and horrible secrets. The stories become unimaginably real causing chaos in the small town.

Between the script and the special effects, Scary Stories reminds me of why I fell in love with horror in the first place. It’s not only about the fear factor but the triumph of the characters who are usually misfits or the forgotten group of outsiders. As R-rated horror films fill the theaters, it’s nice to see a PG-13 horror flick that can still send chills down the spine and teach the audience a lesson. There is a surge of nostalgia in Hollywood right now, and this film has its toe in that pond. While Scary Stories is new and different, it does invite you to think about the scary stories you were told as a kid or the legends that you believed were true of the creepy house you swear was haunted. It truly is a YA and family horror experience for the win.

Scary Stories to Tell in the Dark is an excellent young-adult version of so many things that are already out there. It’s doing its own thing, but paying homage to the fun rated-R horror films that came before that maybe kids were/are too young to have seen. The first few that come to mind are Urban Legend (1998), Jeepers Creepers 2 (2003), and Under the Bed (2013). Who doesn’t check their back seat before they drive off at night, or think about the repercussions of flashing a car if its headlights are off? The film also pays homage to the kid-friendly horror: Are You Afraid of the Dark and Don’t Look Under the Bed (1999). Now with Scary Stories to Tell in the Dark, we will continue, or learn, to be horrified of the corn maze at night and fear the recurring nightmare of what might lurk under our bed.

The actual story inside the film is more than just individual jump scares. It hits all the right notes by giving us insight into the main characters and what they feel, while also tying everything together with a big-picture mentality of what happens when people are afraid of what’s different. The film is set in the late 1960s but could easily happen today. That’s the kind of writing del Toro is known for, and that comes across on screen; its heart, its chills, and it’s different, yet familiar as it resonates with all of us.

Honestly, what these kids are scared of is truly horrifying. Never would I ever want spiders to come out of my face. I can’t even kill a spider, let alone have one crawl on me. The images in this film are indeed the stuff of nightmares. Seeing the drawings of Stephen Gammell come to life is nothing short of perfection. We’ve seen the creatures del Toro dreamt up in Pan’s Labyrinth (2006). It’s no surprise that the monsters in Scary Stories to Tell in the Dark are visually disturbing yet creatively impressive. Although we get to see some of the creatures in the previews, they are still terrifying on the big screen. The special effects in the film make Gammell’s drawings come alive down to the last straw stuffed inside the scarecrow.

My main critical bone to pick with this film was the character of Ramon played by actor Michael Garza, better known for his roles in The Hunger Games: Mockingjay Part 1 and the show Wayward Pines. Ramon could have been so much more realized than he was. It felt like Ramon was an afterthought to tie in the Vietnam War, Nixon, and the racism of the times. He was the weakest link in the bunch. His age was also confusing. In the film, when Ramon is by himself, he seems older. When he is with the group of high schoolers, he looks younger. His character overall didn’t work as well as intended. The other main characters, Stella (Zoe Margaret Colletti), Auggie (Gabriel Rush), and Chuck (Austin Zajur) were great. Their chemistry on screen was fantastic, and they each played their parts very well. This isn’t some made-for-TV film, and it shows. The amount of heart and attention to detail that went into this movie comes across on screen.

There is something about this film that will make it appeal to adults and their young adult counterparts. Both will be scared. For a PG-13 movie, the audience was given the scares, the laughs, and the heart that del Toro is known for. Scary Stories to Tell in the Dark is currently playing in theaters now. It’s a fun time, and you won’t be disappointed.