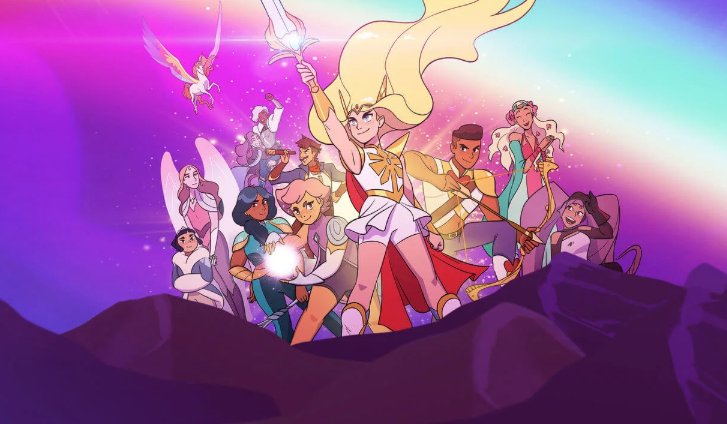 The long-awaited animated television series She-Ra (1985) has finally received its reboot, and this new series is making a big splash with its four award nominations.

The show carefully blends heartbreaking themes with humor for a powerful series with a labyrinth of emotions. The show’s creator, Noelle Stevenson, has produced a work that reflects, refines, and reifies the concentration of diversity and inclusion. She-Ra is a spectacular show and enforces what Wonder Woman started — that female superheroes slay.

The reimagined show comes to delight both fans of the original and those who are new to the series. It is currently now on its fourth season, and it is not slowing down. The new She-Ra has a stunning new series of princesses of color (POC) and ages, while keeping as close to the prototype. The series rivals that of Voltron and The Dragon Prince, with its incorporation of LGBT members appearing as normal as any other characters. Each episode delivers a tear-jerking conflict that slowly simmers underneath the surface, setting up a powerful reveal. The four seasons present two characters, almost sister-like, going through a journey of realization, friendship, bravery, and understanding.

The charming cast is composed of strong and talented voice actors. The strong Adora/She-Ra is voiced by Aimee Carrero. The loveable Bow is voiced by Marcus Scribner, and the dazzling Glimmer performed by Karen Fukuhara, which concludes the best friend squad. The villainous assemble is composed of equal talent. AJ Michalka voices the fantastically strong feline, Catra, and her good nature gal-pal who stands by her side, Scorpia, is voiced by Lauren Ash. The leader of the Horde, Hordak, is voiced by Keston John, and the evil sorceress, Shadow Weaver, is voiced by Larraine Toussaint. This cast proves to be as strong as the sword She-Ra holds.

The show begins with its introduction to the titular character, Adora, who will later be known as She-Ra. The opening theme song “Warriors,” by Aaliyah Rose, is a beautiful work that balances female empowerment with friendship that effortlessly syncs with the message of the series. The setting is Etheria during a great war where we find Adora in the middle of training. She, with grace and skill, is brushing her teeth and striking a punching bag with a silhouette image of the soon to be named queen. This initial point of view reveals that Adora is on the side of the evil Horde, which shows that good and evil are not as distinctly clear as other shows have established. Adora along with her friends/team in the training room take down the evil princesses. This animated series has an explosive start, yet the way it maintains that momentum is truly a feat worth all its accolades.

One of the most notable aspects of this show is its multidimensional villains. Characters are galvanized forward to feel more real with every delicious narrative arc that gives rise to their backstories. These descriptions of their lives allow us to see that being empathic is a superpower we all hold. Each villain makes known why their characters are as they are. Villains are beaten down, pushed aside, and forgotten, but they never give up hope that they will rise from the ashes. They are survivors. Catra is probably the most misunderstood super-villain on the show. Her past, however, is not the only one that is revealed in the span of the program. Scorpia was pushed aside by her best friend. Shadow Weaver had the best intentions but was clouded. Hordac was discarded and hopes for his redemption. These villains show sides that are more multifaceted than other villains.

Adora and Catra are sisters in arms. They grew up together and endured so much pain. They are now comrades turned enemies battling one another, and the cause of this stems from hurt. Their battles are more meaningful because of how close they were. These two young women are complementary opposites at odds with one another. Their costume design helps to emphasize their polemic relationship. Adora is orphaned and taken in by the Horde. Her life begins to change when she is a teenager. Her life has been taken from her in more than one way as the story develops. She has been selected to wheel the sword of power and will be the one to free the people of Etheria. This honor is not a choice for anyone. Adora’s life in the Horde was slightly different than that of her friends. She received more encouragement, praise, and even more attention from Shadow Weaver. Meanwhile, Catra has lived in the shadows of the golden child (Adora). Catra had to be satisfied with second place, with less love, and with less trust. The only way she can win is through rising in the ranks against her best friend.

As the year has developed and the number of superheroes grows, She-Ra has come to offer something more than just another hero with great hair. She-Ra stands for empathy, compassion, and self-sacrifice. The magic that is She-Ra and the Princesses of Power speaks volumes to how friendships can corrode. These friendships often do so because of toxicity and a lack of understanding of the other person’s pain. She-Ra expresses that no matter how strong and brave a hero is, they are not without their own struggles. This superhero show reveals that not all who are evil are truly evil; some are just misunderstood, and sometimes good is found in the most unlikely places. Adora/She-Ra’s compassion, love, and gentler qualities prove that heroes can be defined by more than just brute force.

These strong princesses are warriors. They fight their enemies with power, skill, and bravery in order to protect the world they love. Catra is the only person who understands Adora and vice versa. Yet, the show always walks a fine line between their friendship. The contrast of good and evil, and even the blending of it, at its core, is what makes the spectacle worth watching. She-Ra lives and fights for something bigger than herself, and that is a hero’s journey. She-Ra proves that anyone can be a hero.