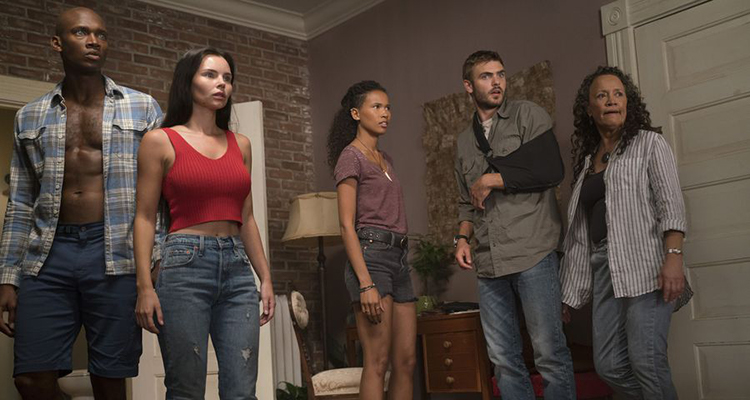 Picking up shortly after where Season 1 left off, Freeform’s second season of Siren wastes no time in upping all the stakes. Still fresh from the death of her beloved sister Donna (Sibongile Mlambo), the mermaid Ryn (Eline Powell) not only grieves this terrible loss but also the loss of her human and mer communities. Her human pack, Maddie (Fola Evans-Akingbola) and Ben (Alex Roe), has scattered to separate corners after Ryn inadvertently came between them. And Ryn is no longer welcome in the waters after her showdown with the mermaid Katrina (Aylya Marzolf).

Ryn isn’t the only one grieving. Xander (Ian Verdun) still mourns the murder of his father at the hands of the merman Levi (Sedale Threatt Jr.), but also the fact that in his vengeful rampage he was the one responsible for Ryn’s sister’s death. “In the ocean, we move forward. Always,” Ryn says as she bonds with Xander in their shared pain.

Ben is still haunted by Ryn’s siren song and takes bigger and bigger risks to try and put it out of his head. Maddie’s estranged mom Susan (Garcelle Beauvais) has returned to Bristol Cove, putting added stress onto Maddie’s home life. And at the environmental center where both Ben and Maddie work, the animals have been behaving more and more erratically to the point where even sea lions are becoming a threat to their human helpers. 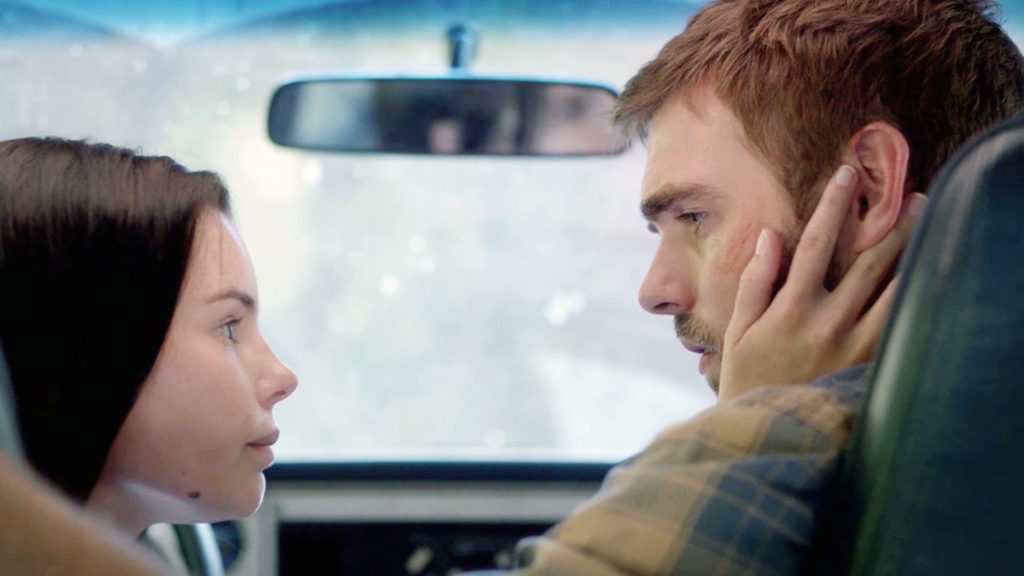 Ryn has been living with Helen (Rena Owen) while she tries to make sense out of her new life on land, and yearns for the connections she once had. “You were raised to live in a pack,” Helen tells her. “You are not solitary creatures.” A statement that broke my heart, since Helen is ancestrally also a mermaid and has been a lone mer for the majority of her life.

Where season one of Siren opened with external forces threatening and destroying the local mermaids, it would seem that season two deals with internalizing and processing all those events. Everyone has lost something profound, and they are scrambling to regain their footing.

That is, until Ryn returns to the water to see if she can figure out what is going on with all the strange underwater activity. She finds that the environmental threats from season one have only compounded. An oil company has begun offshore drilling, and their sonic bombs have been detonating on the floor of the ocean to find extraction sites. It’s not just whales and other creatures washing to shore, Ryn’s merfamily have also been damaged by these violent excavations. The merfolk are having difficulty transforming when they come for safety onto land and many of them are dying too. Including Levi, who Ben and Maddie work to save even knowing their best friend Xander is going to be angry as hell when he finds out. Ryn’s nemesis Katrine is one of the surviving mers who makes her way to Helen’s house. A showdown is imminent. 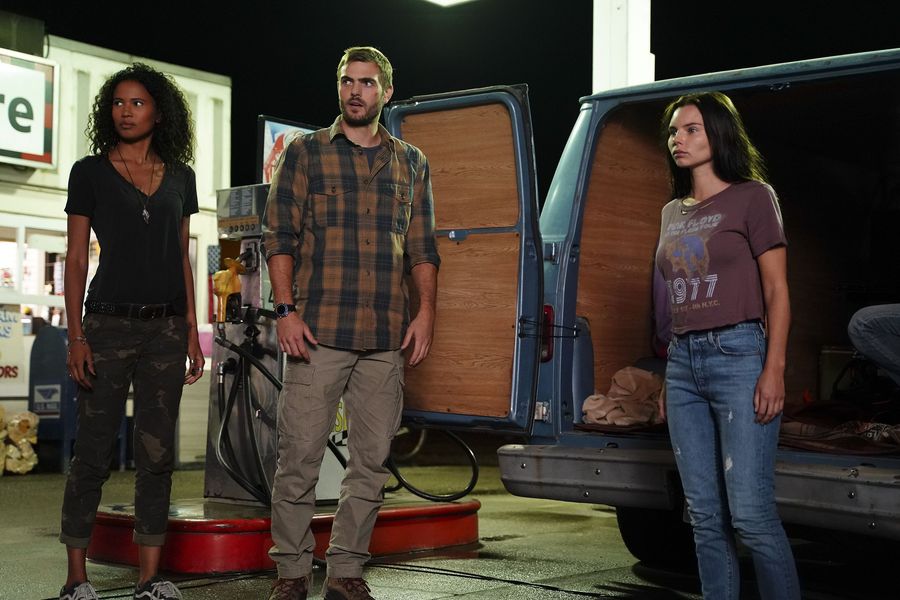 Siren’s first season was filled with such apt social commentary I was worried the second season might not follow suit. But it does. And it is newly relevant as the current political regime has in fact rolled back regulations that once again allow off-shore drilling in places like Florida and the Pacific Northwest rather than investing in renewable energies.

And while merfolk are technically their own species and don’t appear to recognize race or racial differences as humans do, I still love how the majority of the mers in Siren are the spectrum of shades of people of color. The inclusive and representative casting extends to the humans as well, with white folks being securely in the minority even with Ryn as a main character.

The important theme of addiction also continues and deepens in Siren’s sophomore season. Ben is addicted to Ryn’s siren song. And as it turns out season one’s Professor Aldon Decker (Ron Yuan) — who also got Donna’s song caught in his head and accidentally killed himself because of it — was suffering from extreme brain damage when his body is finally autopsied. Maddie suspects that the siren song is more than just a song, and may be functioning like radiation in human brains. Also, Maddie’s mom has been in recovery for the past nine months, and while we don’t know what her addiction was, we know the devastation it caused and continues to cause Maddie.

We are officially living in the era of social justice monster narratives, where in Siren mermaids function as a proxy for environmental metaphors, racial and ethnic inclusion, as well as obsession and loss. I really appreciated how openly people are grieving in this season opener, and in particular the many examples of non-toxic masculinity from Siren’s cast of beautifully sensitive men. 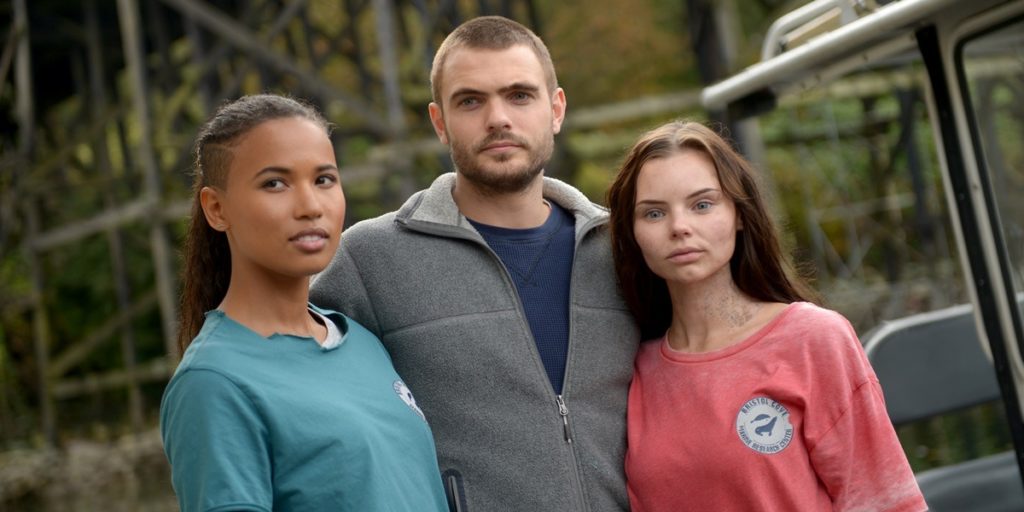 Battle lines have been drawn, and allegiances are shifting into new configurations the players don’t quite understand yet. Xander feels betrayed by his friends. Levi was left behind by his family and now looks to Ryn to replace them. Katrina thinks Ryn has become too human and will surely fight her again to re-take her Alpha mer mantle. Ryn is caught between so many worlds, and all she fundamentally knows is that she doesn’t want to be alone.

Siren is one of the shows I’ve been looking forward to since it ended last year, and this opening episode did not disappoint. And it only looks like it’s going to get better with even higher stakes, as human environmental destruction leads more and more of the vicious merfolk to the surface and onto land as escape. I couldn’t help but think of the migrant crisis at America’s southern border who are fleeing for similar reasons. Unlike the immigrants, barefoot with children in tow, the merfolk are in fact deadly. They may lose their fangs and claws when they come up on land, but they don’t lose their superior strength and abilities. Will the merfolks’ presence lead to humans mending their environmental violence? Or is there only more disruption to come? I can’t wait to find out.