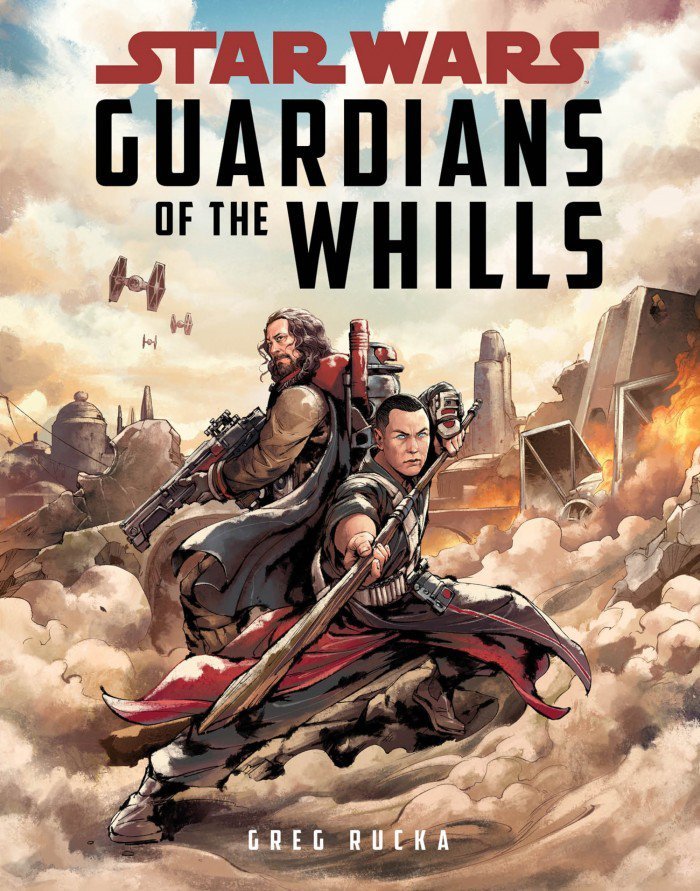 Baze and Chirrut were two of the breakout stars from the film Rogue One. The characters spawned numerous discussions about a possible gay relationship, the nature of force sensitivity, and the new canon view of Jedi lore. And just as quickly as fans fell in love with the duo, our hearts were broken by their fate.

Guardians of the Wills, written by is Greg Rucka, the soothing story our heart needs to deal with our loss.

First, I want to compliment Disney/LucasFilm Press on the overall look of this book, with its slim hardcover and gorgeous illustrations.

Each chapter of the book begins with a poem or meditation from a universe book called Collected Poems, Prayers, and Meditations on the Force.

This novel is set at the beginning of Saw Gerrera’s arrival on Jedha and shows readers the effects his Rebellion on the holy city. As Saw’s actions affect the caretakers of an orphanage Baze and Chirrut have under their protection, the pair make a deal to assist Saw in exchange for their protection. The conversations between these three characters is a revelation in light of their treatment by his warriors in Rogue One.

Saw has spent a considerable amount of time investigating the city and sees Baze and Chirrut as valuable assets. He shares with the pair his rebellious exploits, including a list of incidents that attributed to his injuries.

Rucka captures the humor and friendship between these two characters beautifully.

Though Baze speaks more in these pages than the entirety of Rogue One, his dialogue is in perfect alignment with the character’s personality. Chirrut’s internal monologues show his efforts to understand the will of the force in their current situation, while his gentle natured teasing of Baze displays his affection and appreciation for him.

Though there is very little here to fuel those who “ship” the duo, there is some wonderful backstory about Jedha as well as some more info about Saw Gerrera’s spiral into extremism.

This was such a satisfying read, it made me want more. Like in the novel Before the Awakening, Rucka deftly captures the essence of these characters and the Star Wars universe as a whole.

This is a book not to be missed!